Read and Understand: 'What Katy Did' 3

In this worksheet, students answer questions that check their understanding of the story 'What Katy Did'. 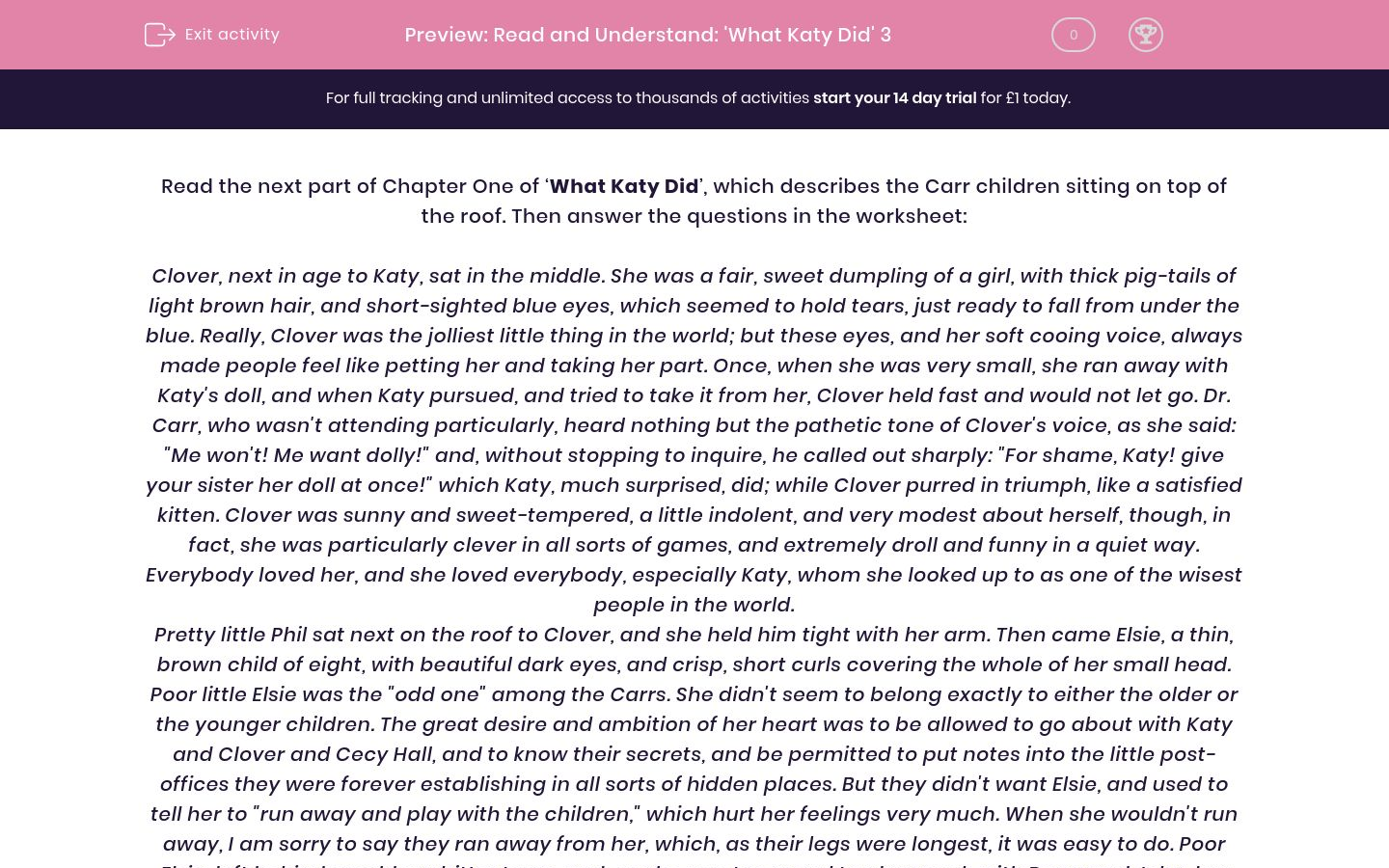 Read the next part of Chapter One of ‘What Katy Did’, which describes the Carr children sitting on top of the roof. Then answer the questions in the worksheet:


Clover, next in age to Katy, sat in the middle. She was a fair, sweet dumpling of a girl, with thick pig-tails of light brown hair, and short-sighted blue eyes, which seemed to hold tears, just ready to fall from under the blue. Really, Clover was the jolliest little thing in the world; but these eyes, and her soft cooing voice, always made people feel like petting her and taking her part. Once, when she was very small, she ran away with Katy's doll, and when Katy pursued, and tried to take it from her, Clover held fast and would not let go. Dr. Carr, who wasn't attending particularly, heard nothing but the pathetic tone of Clover's voice, as she said: "Me won't! Me want dolly!" and, without stopping to inquire, he called out sharply: "For shame, Katy! give your sister her doll at once!" which Katy, much surprised, did; while Clover purred in triumph, like a satisfied kitten. Clover was sunny and sweet-tempered, a little indolent, and very modest about herself, though, in fact, she was particularly clever in all sorts of games, and extremely droll and funny in a quiet way. Everybody loved her, and she loved everybody, especially Katy, whom she looked up to as one of the wisest people in the world.

Pretty little Phil sat next on the roof to Clover, and she held him tight with her arm. Then came Elsie, a thin, brown child of eight, with beautiful dark eyes, and crisp, short curls covering the whole of her small head. Poor little Elsie was the "odd one" among the Carrs. She didn't seem to belong exactly to either the older or the younger children. The great desire and ambition of her heart was to be allowed to go about with Katy and Clover and Cecy Hall, and to know their secrets, and be permitted to put notes into the little post-offices they were forever establishing in all sorts of hidden places. But they didn't want Elsie, and used to tell her to "run away and play with the children," which hurt her feelings very much. When she wouldn't run away, I am sorry to say they ran away from her, which, as their legs were longest, it was easy to do. Poor Elsie, left behind, would cry bitter tears, and, as she was too proud to play much with Dorry and John, her principal comfort was tracking the older ones about and discovering their mysteries, especially the post-offices, which were her greatest grievance. Her eyes were bright and quick as a bird's. She would peep and peer, and follow and watch, till at last, in some odd, unlikely place, the crotch of a tree, the middle of the asparagus bed, or, perhaps, on the very top step of the scuttle ladder, she spied the little paper box, with its load of notes, all ending with: "Be sure and not let Elsie know." Then she would seize the box, and, marching up to wherever the others were, she would throw it down, saying, defiantly: "There's your old post-office!" but feeling all the time just like crying. Poor little Elsie! In almost every big family, there is one of these unmated, left-out children. Katy, who had the finest plans in the world for being "heroic," and of use, never saw, as she drifted on her heedless way, that here, in this lonely little sister, was the very chance she wanted for being a comfort to somebody who needed comfort very much. She never saw it, and Elsie's heavy heart went uncheered.

Dorry and Joanna sat on the two ends of the ridge-pole. Dorry was six years old; a pale, pudgy boy, with rather a solemn face, and smears of molasses on the sleeve of his jacket. Joanna, whom the children called "John," and "Johnnie," was a square, splendid child, a year younger than Dorry; she had big brave eyes, and a wide rosy mouth, which always looked ready to laugh. These two were great friends, though Dorry seemed like a girl who had got into boy's clothes by mistake, and Johnnie like a boy who, in a fit of fun, had borrowed his sister's frock. And now, as they all sat there chattering and giggling, the window above opened, a glad shriek was heard, and Katy's head appeared. In her hand she held a heap of stockings, which she waved triumphantly.