In this worksheets, students read 'The Listeners' by Walter de la Mare and answer questions on its form and content. 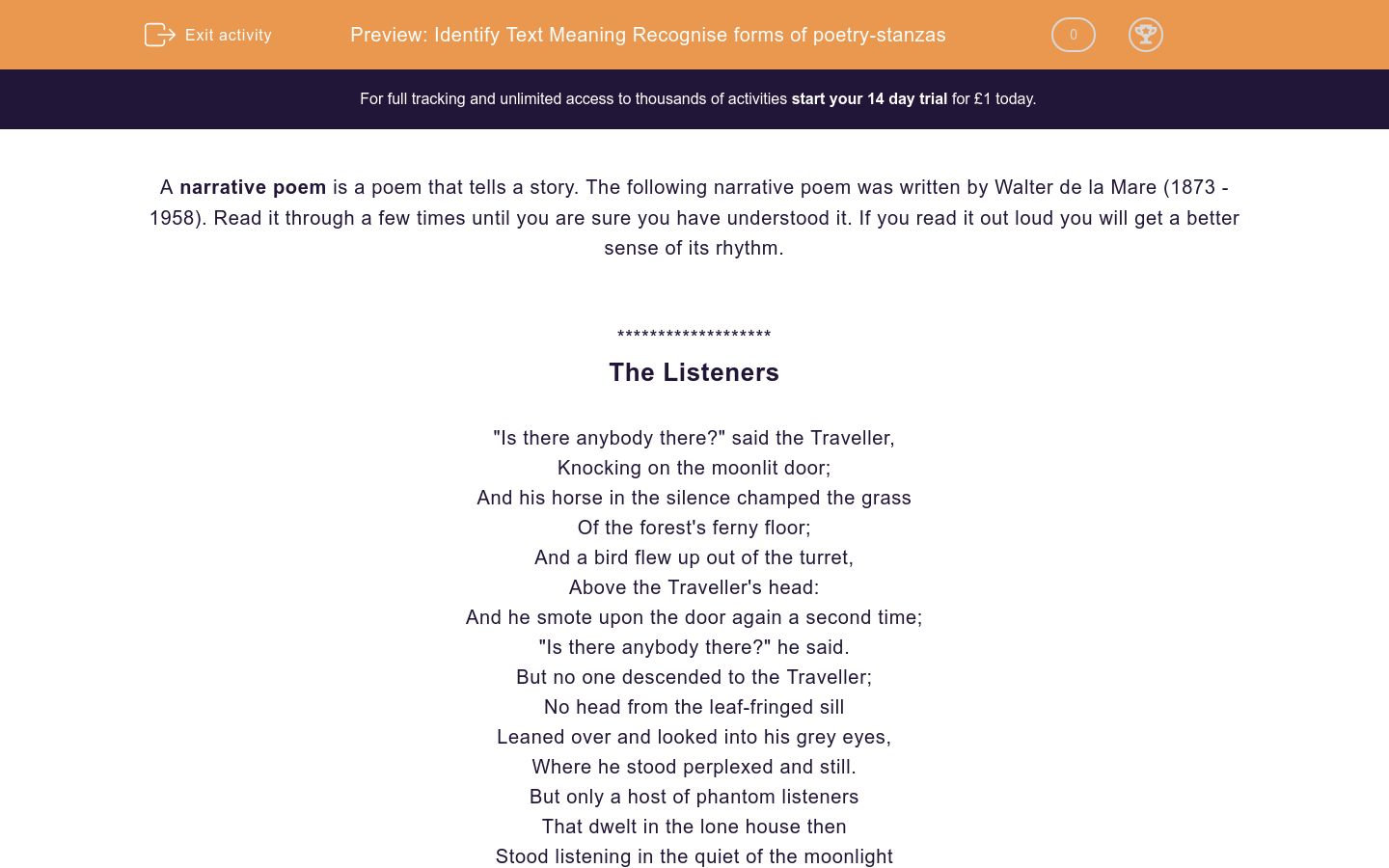 A narrative poem is a poem that tells a story. The following narrative poem was written by Walter de la Mare (1873 - 1958). Read it through a few times until you are sure you have understood it. If you read it out loud you will get a better sense of its rhythm.

"Is there anybody there?" said the Traveller,
Knocking on the moonlit door;
And his horse in the silence champed the grass
Of the forest's ferny floor;
And a bird flew up out of the turret,
Above the Traveller's head:
And he smote upon the door again a second time;
"Is there anybody there?" he said.
But no one descended to the Traveller;
No head from the leaf-fringed sill
Leaned over and looked into his grey eyes,
Where he stood perplexed and still.
But only a host of phantom listeners
That dwelt in the lone house then
Stood listening in the quiet of the moonlight
To that voice from the world of men:
Stood thronging the faint moonbeams on the dark stair,
That goes down to the empty hall,
Hearkening in an air stirred and shaken
By the lonely Traveller's call.
And he felt in his heart their strangeness,
Their stillness answering his cry,
While his horse moved, cropping the dark turf,
'Neath the starred and leafy sky;
For he suddenly smote on the door, even
Louder, and lifted his head:--
"Tell them I came, and no one answered,
That I kept my word," he said.
Never the least stir made the listeners,
Though every word he spake
Fell echoing through the shadowiness of the still house
From the one man left awake:
Ay, they heard his foot upon the stirrup,
And the sound of iron on stone,
And how the silence surged softly backward,
When the plunging hoofs were gone.

In this worksheet you can answer questions on the poem.

Which of the following sentences best sums up what happens in the poem?

Match up the old-fashioned words from the poem with their modern equivalents.

Who are the 'Listeners'?

How many times does the 'Traveller' knock on the door?

The poem is written in rhyme, but what is the rhyming pattern?

Which poetic device is used in the following phrase?

Which of the following adjectives best describes the mood of the poem?

Which of the following sentences best sums up what happens in the poem?

CORRECT ANSWER
A traveller arrives at a house and knocks on the door but nobody answers.
EDDIE SAYS
The trick here is to make sure you read the poem through several times. Really read it and think what story it is telling. The poem is about the 'Traveller' knocking on the door three times and calling out, but nobody answers so he leaves on his horse.

Match up the old-fashioned words from the poem with their modern equivalents.

CORRECT ANSWER
EDDIE SAYS
A tricky one! It is possible to work out the meanings of the old-fashioned words from their context (the other words around them). For example, it says that the horse 'champed the grasses' so the word is likely to refer to a way of eating.

Who are the 'Listeners'?

CORRECT ANSWER
Ghosts in the house
EDDIE SAYS
Keep going your doing great! If you read the poem carefully they are referred to as 'phantom listeners'. A phantom is another word for a ghost.

How many times does the 'Traveller' knock on the door?

CORRECT ANSWER
Three
EDDIE SAYS
You got this! If you need to look back through the text for the answer. The Traveller knocks three times without an answer. The repetition makes the reader aware that he is very anxious to be let in.

The poem is written in rhyme, but what is the rhyming pattern?

Which poetic device is used in the following phrase?

CORRECT ANSWER
Alliteration
EDDIE SAYS
Did you get it correct? When two or more words begin with the same sound it is called alliteration.

Which of the following adjectives best describes the mood of the poem?

CORRECT ANSWER
mysterious
EDDIE SAYS
High five! The poem is mysterious. We don't know why the 'Traveller' has come to the house or why it is full of phantoms. There is not much real action in the poem, but Walter de la Mare successfully builds up the atmosphere in different ways. The Traveller is referred to as 'lonely' and 'perplexed' (puzzled), and the poet mentions the emptiness, strangeness and silence of the setting. There are also a number of references to the moonlight and moonbeams, adding to the eeriness.
---- OR ----