In this worksheet, students will study how cell division occurs including the cell cycle. 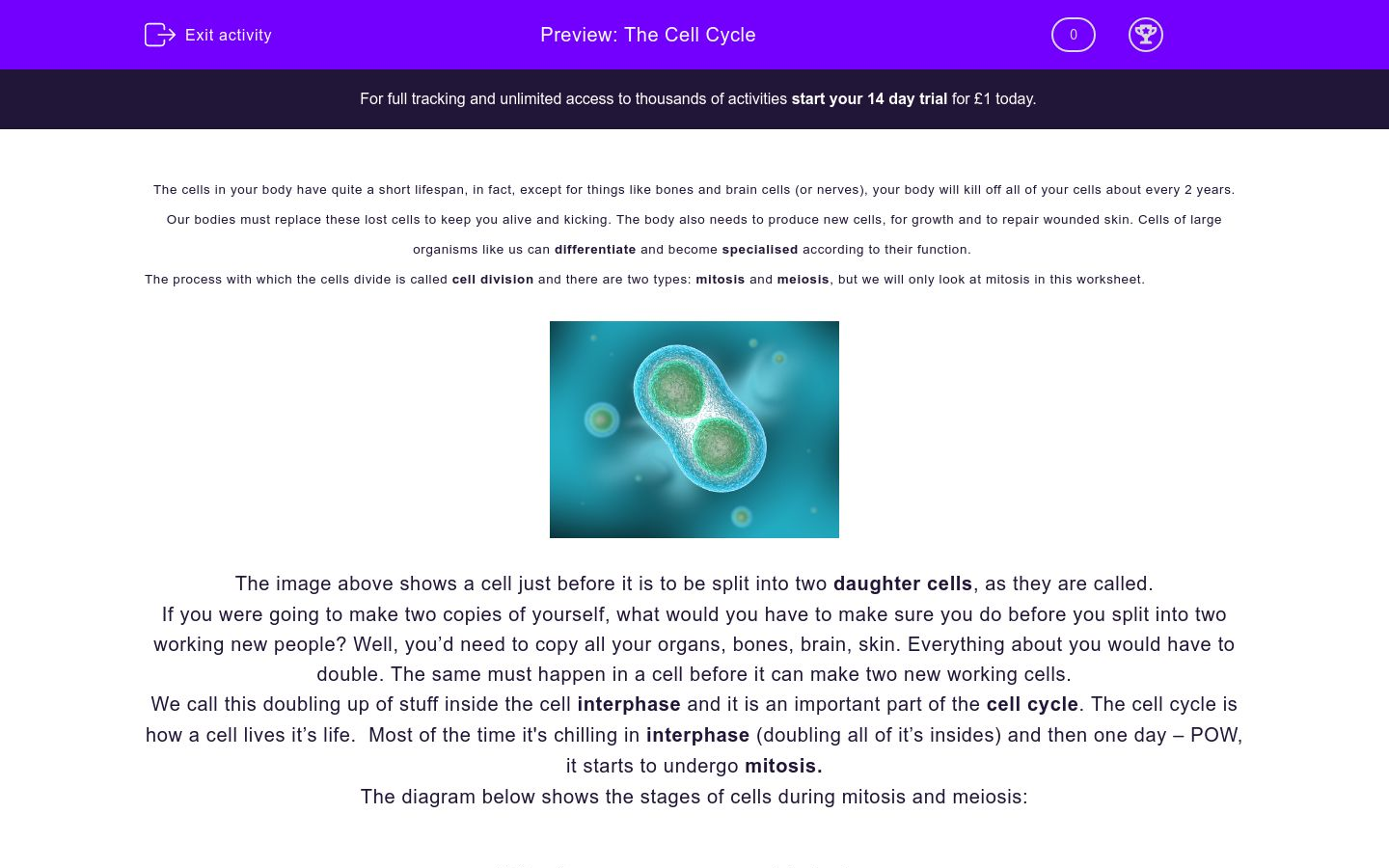 Curriculum subtopic:   Cell Structure, Cells in Animals and Plants, How Do Organisms Grow and Develop?, Cell Structures, Cells and Control

The cells in your body have quite a short lifespan, in fact, except for things like bones and brain cells (or nerves), your body will kill off all of your cells about every 2 years. Our bodies must replace these lost cells to keep you alive and kicking. The body also needs to produce new cells, for growth and to repair wounded skin. Cells of large organisms like us can differentiate and become specialised according to their function.

The process with which the cells divide is called cell division and there are two types: mitosis and meiosis, but we will only look at mitosis in this worksheet.

The image above shows a cell just before it is to be split into two daughter cells, as they are called.

If you were going to make two copies of yourself, what would you have to make sure you do before you split into two working new people? Well, you’d need to copy all your organs, bones, brain, skin. Everything about you would have to double. The same must happen in a cell before it can make two new working cells.

We call this doubling up of stuff inside the cell interphase and it is an important part of the cell cycle. The cell cycle is how a cell lives it’s life.  Most of the time it's chilling in interphase (doubling all of it’s insides) and then one day – POW, it starts to undergo mitosis.

The diagram below shows the stages of cells during mitosis and meiosis:

So, what actually happens in mitosis?

1) Chromosomes duplicate and the nucleus dissolves.

3) The spindles literally rip the chromosomes in two, pull each half of a chromosome to the side where it will make a new cell.

4) Now that the chromosomes are far apart, the nucleus reforms on each side and then the cell splits up to make two new identical cells.

Note: It is important to remember that the two new cells that are produced are identical. They have the same chromosomes in them so they will be doing the same job.

What is the purpose of cell division? Three answers apply.

How are cells of multicellular organisms different from those of unicellular?

They divide better
They are identical
They differentiate

What is the name of the process that duplicates everything inside the cell?

What are the new cells called?

What is special about the new cells that are made from mitosis?

They are identical
They are different

Which of the following statements happens first in mitosis?

What happens to the nucleus before cell division?

They form a new one
It dissolves
Nothing

Along which part of the cell are chromosomes arranged at the beginning of cell division?

The middle
The equator
The center

What phase does the cell spend most of it's time doing?

If an organism only makes new offspring using mitosis, what would be special about these offspring?

What is the purpose of cell division? Three answers apply.

How are cells of multicellular organisms different from those of unicellular?

CORRECT ANSWER
They differentiate
EDDIE SAYS
Unicellular - made of one cell only, normally a prokaryotic cell. Multicellular - made of lots of different types of cells. Differentiation - when a generic cell becomes a specialised cell. That's right folks, you need to remember these descriptions from earlier activities.

What is the name of the process that duplicates everything inside the cell?

CORRECT ANSWER
Interphase
EDDIE SAYS
Interphase is when everything is doubled, it is where most of the time of a cells life is spent and always needs to happen before mitosis.

What are the new cells called?

CORRECT ANSWER
Daughter cells
EDDIE SAYS
New cells are called daughter cells. Why daughter you ask? Good question! I guess it's just a mystery we will never know the answer to!

What is special about the new cells that are made from mitosis?

Which of the following statements happens first in mitosis?

CORRECT ANSWER
Chromosomes are doubled.
EDDIE SAYS
The chromosomes have to be doubled before anything else can happen - otherwise you would get a cell with no chromosomes in it and that cell would be killed by the body.

What happens to the nucleus before cell division?

CORRECT ANSWER
It dissolves
EDDIE SAYS
The nucleus needs to dissolve so that the chromosomes can move. Chromosomes are too big to get out of the nucleus, so we need to destroy it in order to get a new cell with new nuclei.

Along which part of the cell are chromosomes arranged at the beginning of cell division?

CORRECT ANSWER
The equator
EDDIE SAYS
At the beginning of cell division chromosomes are arranged along the equator.

What phase does the cell spend most of it's time doing?

CORRECT ANSWER
Interphase
EDDIE SAYS
Interphase is the time that the cell spends duplicating itself in preparation for mitosis. This is where it spends most of the time.

If an organism only makes new offspring using mitosis, what would be special about these offspring?

CORRECT ANSWER
Identical organisms
EDDIE SAYS
Mitosis creates genetically identical cells. This means there is no variation created from mitosis. Some organisms do this - but they have a special method of stealing new genetic information from other organisms!
---- OR ----