In this worksheet. students will understand the impact of surface area to volume ratios on diffusion in organisms and the need for transport systems. 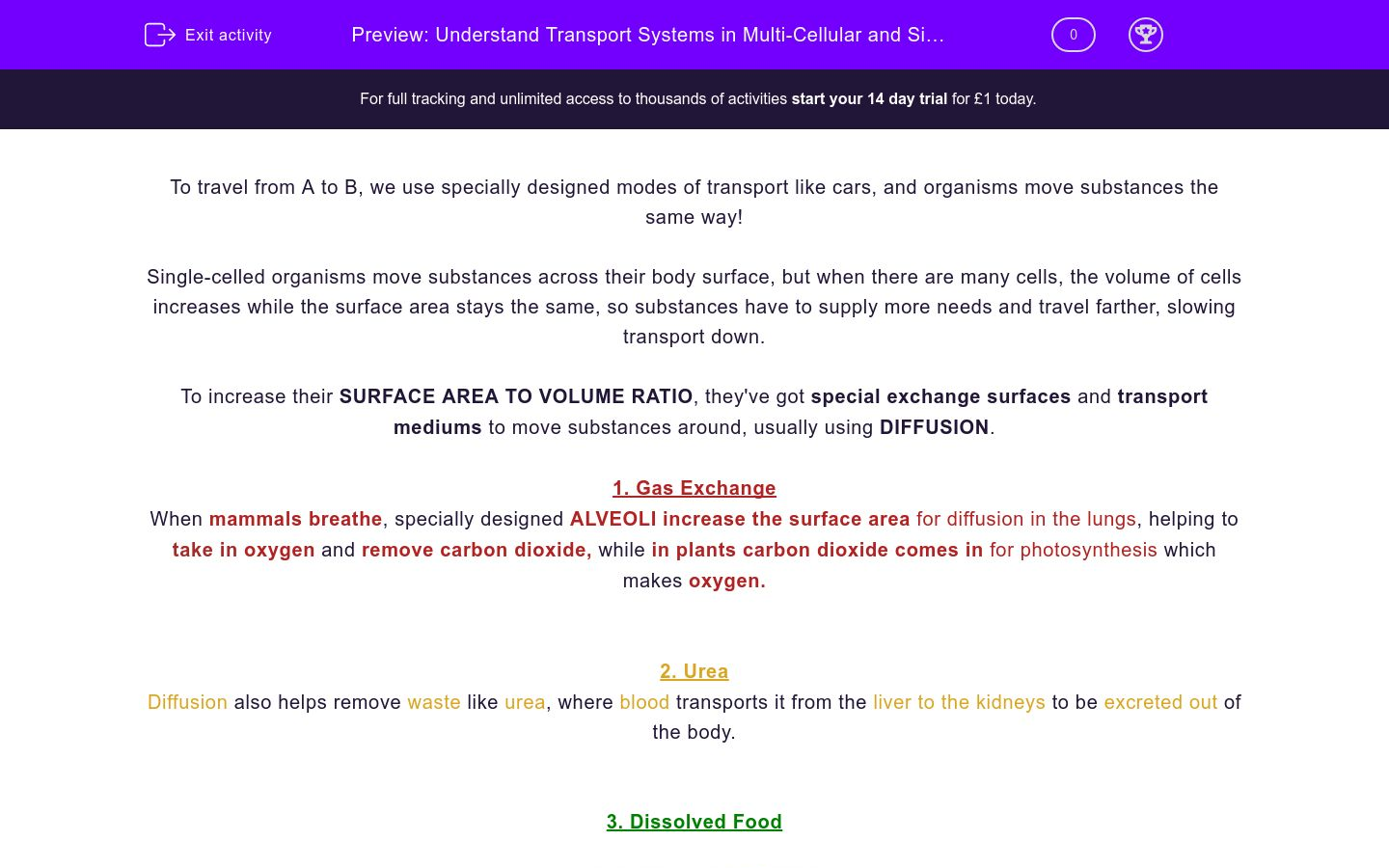 To travel from A to B, we use specially designed modes of transport like cars, and organisms move substances the same way!

Single-celled organisms move substances across their body surface, but when there are many cells, the volume of cells increases while the surface area stays the same, so substances have to supply more needs and travel farther, slowing transport down.

To increase their SURFACE AREA TO VOLUME RATIO, they've got special exchange surfaces and transport mediums to move substances around, usually using DIFFUSION.

When mammals breathe, specially designed ALVEOLI increase the surface area for diffusion in the lungs, helping to take in oxygen and remove carbon dioxide, while in plants carbon dioxide comes in for photosynthesis which makes oxygen.

Diffusion also helps remove waste like urea, where blood transports it from the liver to the kidneys to be excreted out of the body.

Food is broken in the digestive system into dissolved food molecules that diffuse into the bloodstream using MICROVILLI that increase the gut's surface area for absorption. 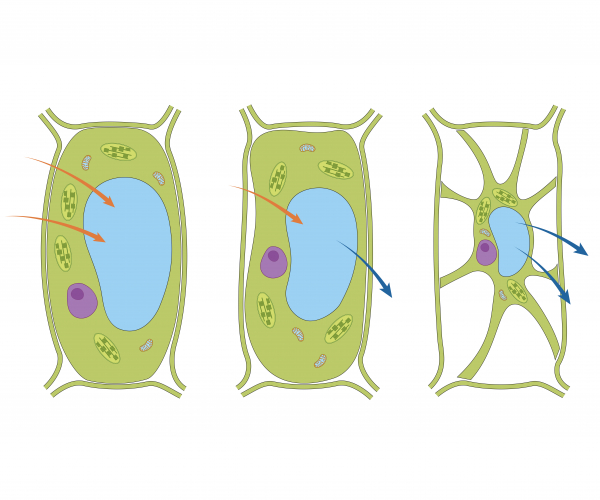 Osmosis is particular to the diffusion of WATER, and when plant cells are placed in a watery mixture they take water in and become TURGID, and the only thing that stops them bursting is their strong cell walls.

But if plant cells are placed in a low water solution, cells release water and they shrink away from the cell wall, becoming PLASMOLYSED.

Animals cells change shape during osmosis as they don't have cell walls, like red blood cells expanding or shrivelling up.

In plants, the uptake of MINERAL IONS by root hair cells uses active transport to pull them from the low concentration in the soil into the almost full cells AGAINST the concentration gradient using ENERGY.

After diffusion and osmosis, which other method is used to transport substances?

What is the journey of urea?

Active transport is a method of substance transport across exchange surfaces.

Mineral Ions are actively transported into which cells?

After diffusion and osmosis, which other method is used to transport substances?

CORRECT ANSWER
ACTIVE TRANSPORT
EDDIE SAYS
The movement of substances is often dependent on whether the outside environment has more or less of the desired molecule than what's inside the cell, creating a natural shift in particles to create an equal balance on both sides. Active transport takes this one step farther and uses energy to go against this natural desire for equilibrium.

CORRECT ANSWER
Dissolved Foods
Urea
Oxygen
EDDIE SAYS
How did you get on with this question? Diffusion is used in gas exchange with oxygen and carbon dioxide in both plants and animals, but also with dissolved foods across the small intestine wall and waste products like urea. Water, however, is indeed moved by diffusion but it has its own special term for this transport called OSMOSIS.

CORRECT ANSWER
EDDIE SAYS
Plant cells take in carbon dioxide for photosynthesis, creating oxygen which diffuses out of the cells. But in the alveoli, oxygen is needed for respiration while carbon dioxide waste is gathered in the blood from cells, escorted to the lungs and breathed out.

What is the journey of urea?

CORRECT ANSWER
Liver ⇒ Blood ⇒ Kidneys
EDDIE SAYS
When protein is broken down, any unused excess is converted into fat and carbohydrate stores, but this makes an unwanted byproduct called ammonia which has to be made into urea so it can be safely removed. Urea is therefore made by the LIVER and then diffuses into the BLOOD to be transported into the KIDNEYS to be excreted out of the body.

Active transport is a method of substance transport across exchange surfaces.

CORRECT ANSWER
EDDIE SAYS
The alveoli look like cotton plants or grapes, having a bumpy formation rather than being smooth spheres, increasing the amount of surface that has contact with the blood for optimal diffusion. Microvilli also increase the surface area for dissolved food molecules to diffuse into the blood.

CORRECT ANSWER
EDDIE SAYS
TURGID means the plant cell is full of water and the cell wall stops it bursting like human cells. This happens when there is a lot of water around the cell, called a dilute solution, as the cell takes up water across the concentration gradient through the permeable cell wall and cell membrane. PLASMOLYSED is when the cell has lost so much water that the cell membrane starts peeling off the cell wall as the cell shrinks. A cell loses water when osmosis takes water across a concentration gradient into an area with little water. In animals, this causes shrinkage.

CORRECT ANSWER
BURST
EDDIE SAYS
The additional support provided by the cell wall gives plant cells strength so when they take up water by osmosis they don't burst, which is a problem in humans cells like red blood cells. Well done on making it through this activity and remember to jot down any useful phrases or explanations that have helped you wrap your head around this topic!

Mineral Ions are actively transported into which cells?

CORRECT ANSWER
ROOT HAIR CELLS
EDDIE SAYS
Plant cells need a high concentration of mineral ions in their cells so they use active transport to collect any remaining salts in the soil and push them into the root hair cells using energy.
---- OR ----