Recall the Main Structures and Functions of the Circulatory System

In this worksheet, students will recall the main structures and functions of the circulatory system. 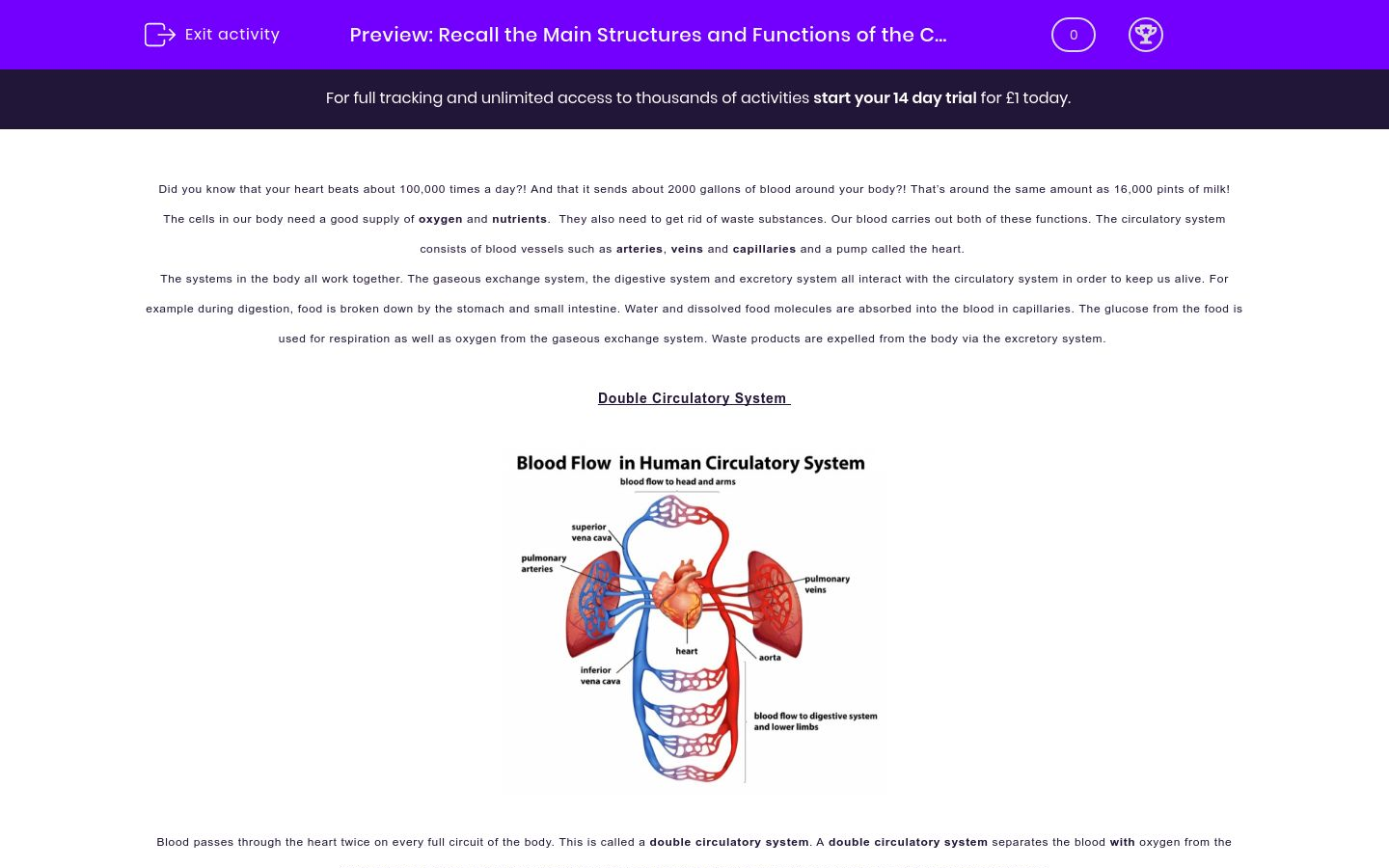 The systems in the body all work together. The gaseous exchange system, the digestive system and excretory system all interact with the circulatory system in order to keep us alive. For example, during digestion, food is broken down by the stomach and small intestine. Water and dissolved food molecules are absorbed into the blood in capillaries. The glucose from the food is used for respiration, as well as oxygen from the gaseous exchange system. Waste products are expelled from the body via the excretory system.

When blood has been pumped out of the left ventricle of the heart, it begins to make its journey around the body in an artery called the aorta.  The blood is rich in oxygen. Oxygen is carried by red blood cells. The oxygen leaves the red blood cells as they pass through the capillaries.  Capillaries are the network of blood vessels that pass between the cells in the body. As blood leaves the capillaries, it enters veins. Veins return blood to the heart.

When blood flows out of the heart, it enters the arteries. The blood is at very high pressure because it has been forced out of the heart by the contraction (or squeezing) of the ventricles. Arteries have very strong walls to be able to cope with the high pressure of the blood flowing through them.  The blood moves through the arteries with every heartbeat.  The thick muscular walls stretch and then bounce back into place because of the elastic fibres in the walls of arteries.

Arteries divide into smaller blood vessels called capillaries. The function of a capillary is to take nutrients and oxygen to cells and take waste products away. The structure of a capillary helps it do this - capillaries have very thin walls, they are only one cell thick, which means that the substances can diffuse in and out very quickly.

Capillaries eventually join up again and form veins.  By the time the blood gets to the veins, it is at a much lower pressure than it was in the arteries, so veins don't need to have thick, strong, elastic walls. Instead, veins have valves to stop the blood from flowing backwards. Arteries do not have valves because the force of the heartbeat keeps the blood moving.

The lungs are well adapted for gas exchange. Breathing involves exchanging gases in the lungs.

When you breathe in, oxygen in the inhaled air travels down your trachea which branches off into bronchi (one branch is called the bronchus). This further divides into bronchioles and, eventually, the oxygen diffuses through the tiny alveoli (air sacs) in your lungs into your bloodstream. The oxygen is transported to the heart in the pulmonary vein and then pumped around your body in the aorta from the heart. The oxygen is needed for respiration that occurs in your cells. Carbon dioxide is the waste gas produced by respiration. Carbon dioxide diffuses from cells into the bloodstream and is pumped to the lungs in the pulmonary artery, to be exhaled.

This goes to show how the circulatory system and gaseous exchange system work together!

The alveoli have a few adaptations that make gas exchange very efficient. They are only one cell thick, making them very thin, allowing gases to pass through easily and quickly. They also have a large surface area, allowing large amounts of gases to be exchanged with each breath.

In the following activity, you will recall the main structures and functions of the circulatory system.

Which side of the heart pumps oxygenated blood? 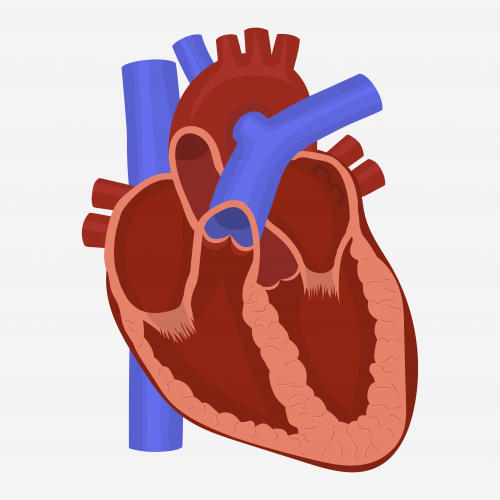 Look at the image of the heart.

Why do the ventricles of the heart have thicker walls than the atria? 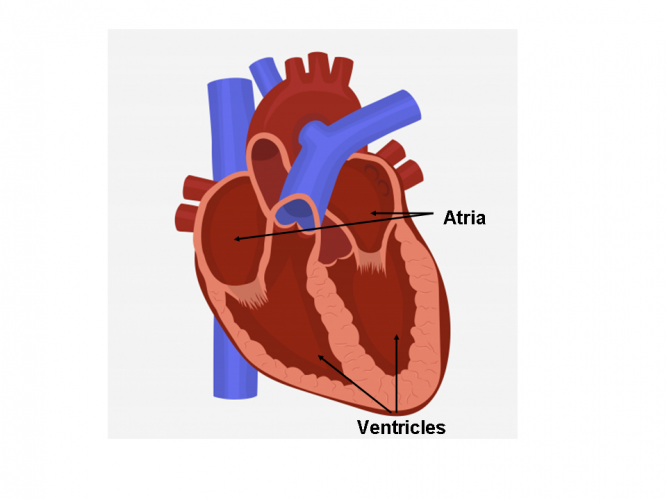 What are the names of these blood vessels?

Match the blood vessels with their descriptions below.

How are capillaries suited to their function?

What are the only arteries and veins that don't follow this rule?

The image shows a section through the heart.

Name the structures labelled A, B and C on the image below. 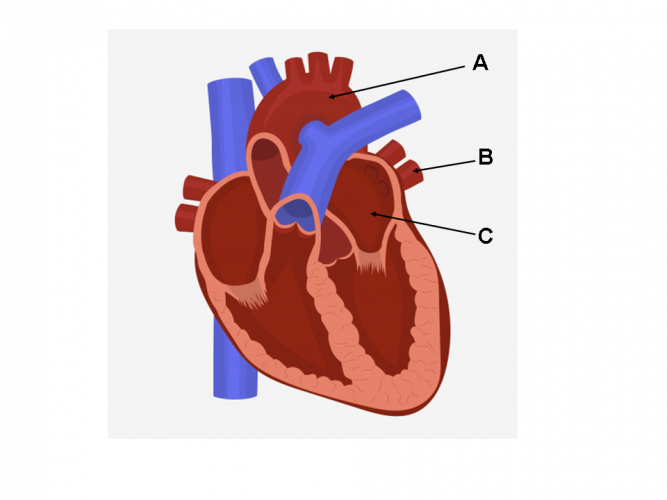 How does the digestive system help with the process of respiration?

What are the names of some of the systems that interact with the circulatory system?

The blood is transported in a double circulatory system.

What does this mean?

Which side of the heart pumps oxygenated blood?

CORRECT ANSWER
Left-hand side
EDDIE SAYS
Try not to get confused - you have to imagine the image of the heart as if it's inside your body. So, the right side on the paper is actually the left-hand side in real life! The heart pumps oxygenated blood out of the left ventricle to the rest of the body through the aorta.

Look at the image of the heart.

Why do the ventricles of the heart have thicker walls than the atria?

What are the names of these blood vessels?

CORRECT ANSWER
Artery
Vein
Capillary
EDDIE SAYS
Hopefully, this didn't trip you up. The three you needed were artery, vein and capillary. A neurone is another name for a nerve cell and insulin is a hormone involved in blood sugar regulation!

Match the blood vessels with their descriptions below.

How are capillaries suited to their function?

CORRECT ANSWER
They are only one cell thick
EDDIE SAYS
Did you spot that option one was describing arteries and option three was referring to veins? Capillaries are extremely thin - they're only one cell thick! This means that gases and nutrients can diffuse really quickly from the blood into cells. If the capillaries were thicker, it would take longer for gases and nutrients to be exchanged and the blood wouldn't be able to meet the demands of the body.

What are the only arteries and veins that don't follow this rule?

The image shows a section through the heart.

Name the structures labelled A, B and C on the image below.

How does the digestive system help with the process of respiration?

CORRECT ANSWER
The digestive system breaks down food which will release glucose into the blood
The glucose is combined with oxygen to carry out respiration, releasing energy
EDDIE SAYS
Did you wonder why this question appeared in an activity to do with the circulatory system?! This is because the circulation of the blood is essential for the transporting of dissolved food to different cells of the body! Respiration requires both oxygen and glucose. Oxygen is carried by the blood from the lungs to the cells of the body. Glucose is also carried in the blood, but from the small intestines to the body cells. Without the circulatory system, neither of these substances could be transported around the body!

What are the names of some of the systems that interact with the circulatory system?

CORRECT ANSWER
Digestive system
Gaseous exchange system
Excretory system
EDDIE SAYS
Our bodies are extraordinary organisms that are kept alive by the continuous activity of many different processes! There were three different systems listed above that need the circulatory system to transport essential substances around the body. These substances are needed for different processes such as respiration.

The blood is transported in a double circulatory system.

What does this mean?

CORRECT ANSWER
Blood passes through the heart twice in every full circuit of the body
Blood with oxygen is separated from blood without oxygen
EDDIE SAYS
How did you get on with this question - it is fairly crucial to understand about the movement of the blood. In a double circulatory system, blood travels around the body twice in every full circuit. The first circuit takes deoxygenated blood from the heart to the lungs (in the pulmonary artery), picks up oxygen from the lungs and returns oxygenated blood to the heart (in the pulmonary vein). In the second circuit, the heart pumps oxygenated blood from the heart to the body's cells (in the aorta), delivers oxygen, glucose etc to the cells and returns deoxygenated blood to the heart in the vena cava. Simple!!
---- OR ----