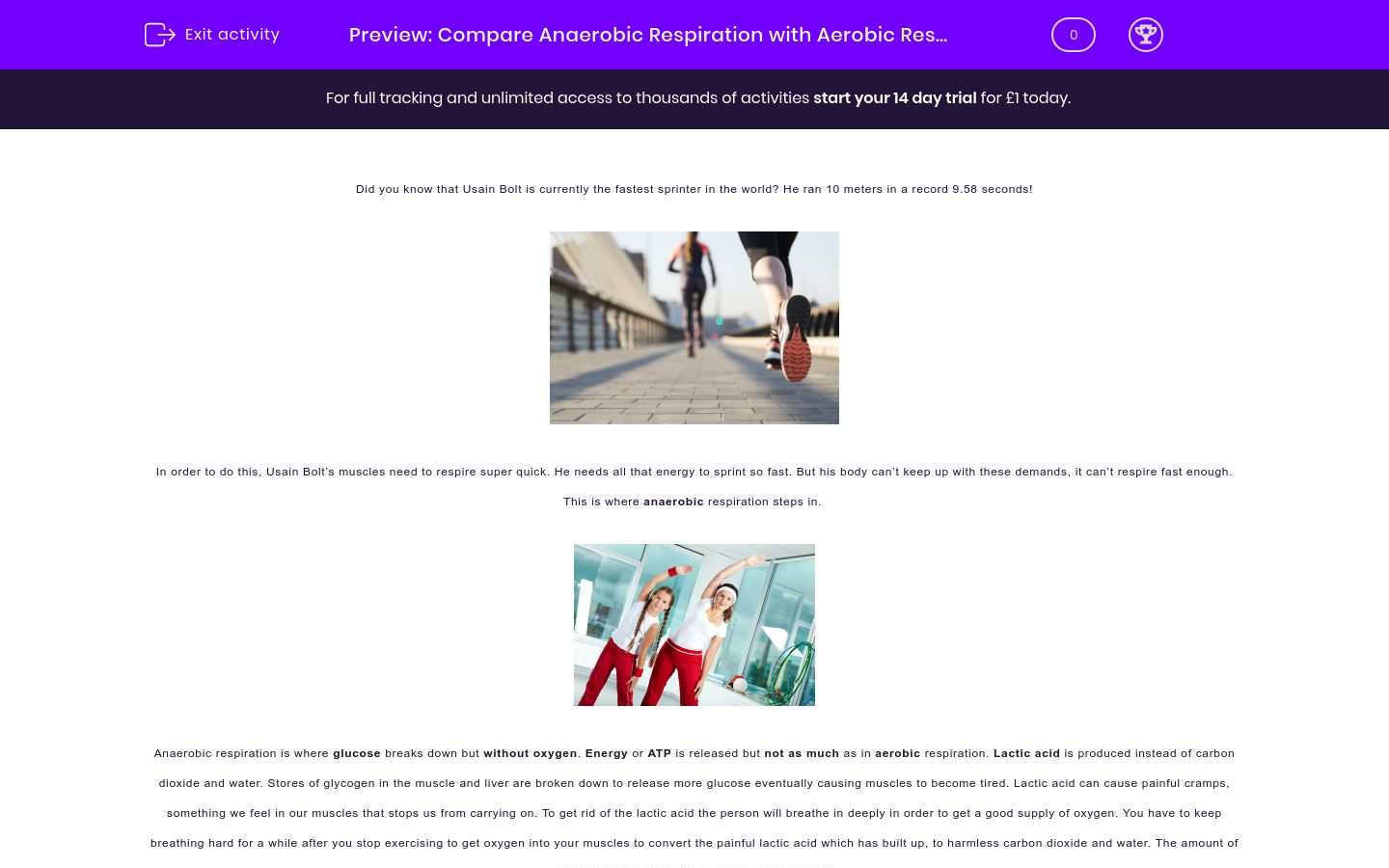 Did you know that Usain Bolt is currently the fastest sprinter in the world? He ran 100 metres in a record 9.58 seconds!​

In order to do this, Usain Bolt’s muscles need to respire super quick. He needs all that energy to sprint so fast. But his body can’t keep up with these demands - it can’t respire fast enough. This is where anaerobic respiration steps in.

Anaerobic respiration is where glucose breaks down but without oxygen. Energy, or ATP, is released but not as much as in aerobic respiration. Lactic acid is produced instead of carbon dioxide and water. Stores of glycogen in the muscles and liver are broken down to release more glucose, eventually causing muscles to become tired. Lactic acid can cause painful cramps - something we feel in our muscles that stops us from carrying on. To get rid of the lactic acid, the person must breathe in deeply in order to get a good supply of oxygen. You have to keep breathing hard for a while after you stop exercising to get oxygen into your muscles. This will convert the painful lactic acid which has built up, to harmless carbon dioxide and water. The amount of oxygen needed to do this is called the oxygen debt.

Anaerobic respiration can be represented by the word and symbol equation:

The reactant in anaerobic respiration is glucose. The product is lactic acid. A small amount of energy is also released.

Plants can also respire anaerobically. However, they don't produce lactic acid. Glucose is broken down into ethanol and carbon dioxide.

What is meant by the term oxygen debt?

What are two differences between anaerobic and aerobic respiration?

Karl is at the gym exercising. After a while on the treadmill, he gets cramp in his legs. Karl blames lactic acid building up in his muscles.

What is the chemical equation for this process?

Select some similarities and differences between aerobic and anaerobic respiration.

Compare aerobic and anaerobic respiration by filling in the blanks below.

When athletes train hard, they can respire anaerobically. After exercise, athletes will often breathe heavily for a while.

Why do they do this?

What is the chemical formula for  X and Y in the equation for anaerobic respiration below? 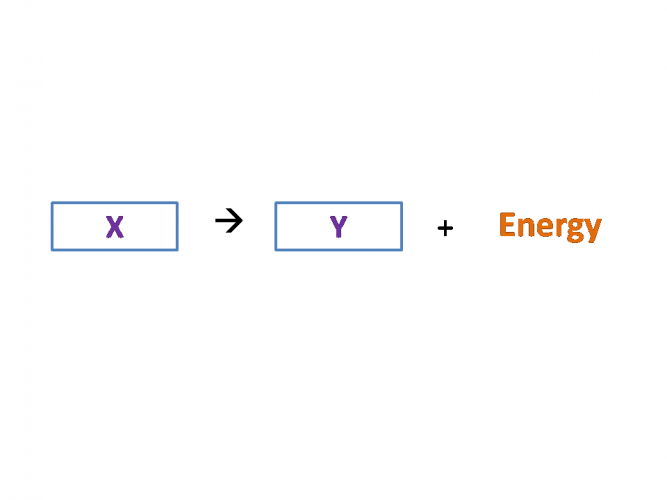 The word equation for anaerobic respiration is:

What could be written instead of 'energy'?

Which activity is most likely to use anaerobic respiration? 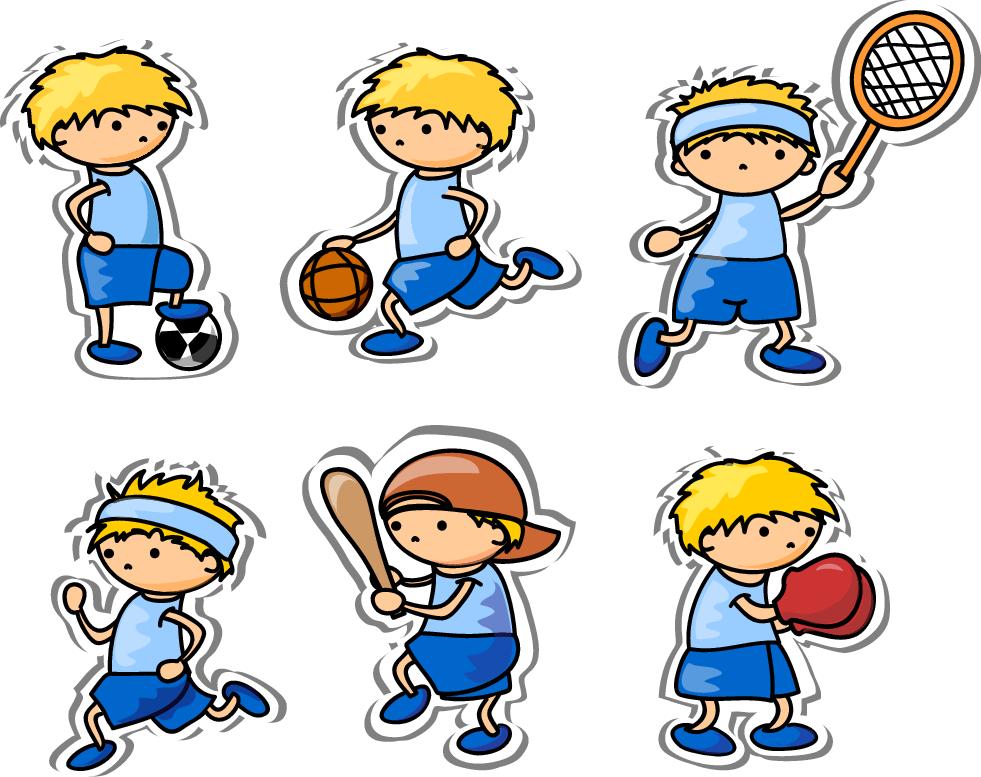 What is meant by the term oxygen debt?

CORRECT ANSWER
The amount of oxygen needed to break up lactic acid into carbon dioxide and water
EDDIE SAYS
The term debt means when you owe someone something, normally money! Here, the body owes oxygen, which is why you will have to breathe in quickly and deeply after exercising hard in order to take in as much oxygen as possible. This oxygen will then break up the lactic acid and convert it into carbon dioxide and water.

What are two differences between anaerobic and aerobic respiration?

Karl is at the gym exercising. After a while on the treadmill, he gets cramp in his legs. Karl blames lactic acid building up in his muscles.

What is the chemical equation for this process?

CORRECT ANSWER
A
EDDIE SAYS
Lactic acid will cause pain! Our body won't be able to tolerate a build-up of lactic acid. The only option is to breathe deeply to break it up. So, you know that anaerobic respiration needs glucose as the reactant and produces lactic acid - but what is the chemical formulae for these substances?! Glucose is a complicated one but you need to learn it: C6H12O6 So the equation is C6H12O6 → 2C3H6O3 You might have been able to eliminate C immediately because it had carbon dioxide as a product, which could not happen in anaerobic respiration.

Select some similarities and differences between aerobic and anaerobic respiration.

CORRECT ANSWER
EDDIE SAYS
There was lots to remember here. How did you get on with it? Don't forget that the main purpose of respiration is to produce energy! If you're not too confident with all of the statements above, take a bit of time to learn these important facts and maybe have another go at this question.

Compare aerobic and anaerobic respiration by filling in the blanks below.

CORRECT ANSWER
EDDIE SAYS
There's lots to sort out here but all very important! This activity would be useful for an extended answer in your exams, so have a few tries to help consolidate your knowledge.

When athletes train hard, they can respire anaerobically. After exercise, athletes will often breathe heavily for a while.

Why do they do this?

CORRECT ANSWER
To pay back their oxygen debt
To get rid of the build up of lactic acid
EDDIE SAYS
Lactic acid builds up in muscles causing pain. Athletes pant in order to get more oxygen into the body, as this will get rid of the lactic acid and break it down into carbon dioxide and water. This is known as the oxygen debt because the body is in need of oxygen.

What is the chemical formula for  X and Y in the equation for anaerobic respiration below?

CORRECT ANSWER
EDDIE SAYS
How did you do? Take your time remembering these chemical formulae, especially for glucose - it comes up often in exams!

The word equation for anaerobic respiration is:

What could be written instead of 'energy'?

CORRECT ANSWER
ATP
EDDIE SAYS
Don't panic if you didn't know this one - it is a bit tricky. ATP stands for adenosine triphosphate and it is the molecule that transfers energy. You are unlikely to be asked for much detail about it but you do need to recognise the term.

CORRECT ANSWER
The glucose molecules aren't fully broken down to release energy
EDDIE SAYS
How did you get on? In anaerobic respiration, less energy is released as glucose isn't broken down fully. Oxygen is needed to complete the process of glucose break down.

Which activity is most likely to use anaerobic respiration?

CORRECT ANSWER
Jumping to block a shot in basketball
EDDIE SAYS
Any activity that is done over a long period of time (such as a 10 km run) will most likely use aerobic respiration. Yoga may well be a tricky activity to master, but it doesn't require sudden bursts of energy. Doing a sudden jump, however, needs a quick burst of energy to be released, so it's a perfect use of anaerobic respiration. Don't forget our bodies can use a mixture of both aerobic and anaerobic respiration - it all depends on the need! Well done for completing another activity!
---- OR ----