In this worksheet, students look at allotropes to examine how nanochemistry works. 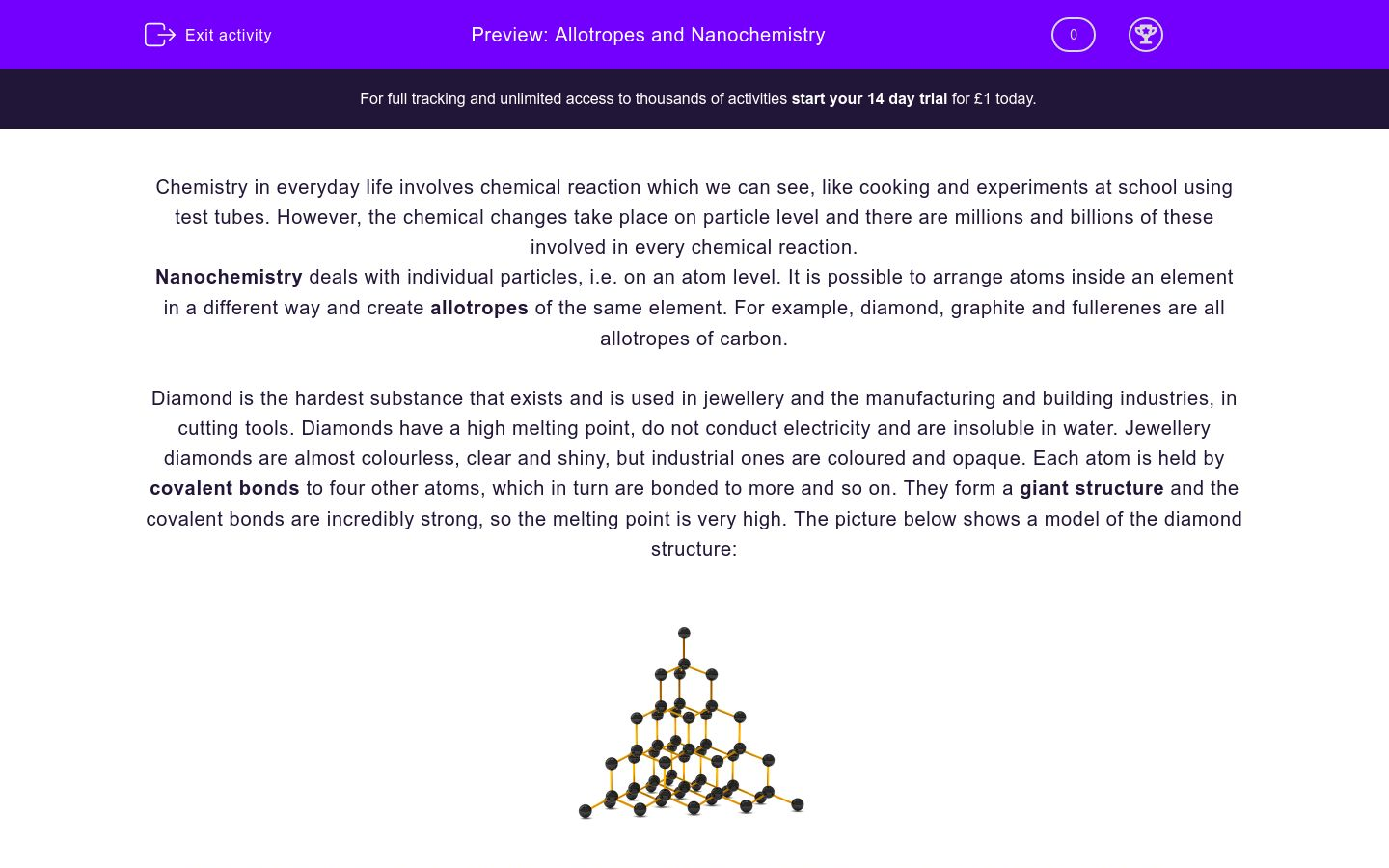 In everyday life, chemistry involves chemical reactions which we can see, such as cooking, and experiments at school using test tubes. However, chemical changes take place at particle level and there are millions, even billions of these involved in every chemical reaction.

Nanochemistry deals with individual particles, i.e. at atom level. It is possible to arrange atoms inside an element in a different way and create allotropes of the same element - for example, diamond, graphite and fullerenes are all allotropes of carbon.

Diamond is used in jewellery but because it is the hardest substance that exists, it is also used in the manufacturing and building industries for cutting-tools. Diamonds have a high melting point, do not conduct electricity and are insoluble in water. Diamonds used in jewellery are almost colourless, clear and shiny, but industrial ones are coloured and opaque. Each atom is held by covalent bonds to four other atoms which, in turn, are bonded to more and so on. They form a giant structure and the covalent bonds are incredibly strong, so the melting point is very high. The picture below shows a model of the structure of diamond:

Graphite is also made of carbon but it is soft, opaque and black (but still shiny). It is also insoluble in water but conducts electricity very well. Its melting point is high, so it can be used to make electrodes for electrolysis. It is made of flat layers that are far apart which makes it slippery, so it can be used to make pencils. When you write with a pencil, some of the graphite slides off and leaves a mark on the paper. Look at the diagram below to see how different the structure of graphite is to that of diamond:

Fullerenes, also made of carbon, look very different to both graphite and diamond. Have a look at the structure of fullurenes:

Fullerenes are black solids, insoluble in water but soluble in petrol. They are used to carry drug molecules around the body, and trap and remove dangerous substances from the body. Their nanotubes are used in catalyst systems.

Now it's time for some questions on this topic.

At what level does nanochemistry work?

At a solution level
At an atom level
On the macroscale

What is an allotrope?

Diamond, graphite and fullerenes are allotropes of which element?

Which allotrope of carbon is used to make pencils?

How are diamonds used in the manufacturing and building industries?

What type of bonds link carbon atoms together?

Which allotrope of carbon is shown in the diagram below?

What use of diamond is shown in the picture below?

Which allotrope of carbon is shown in the picture below?

What type of substances are fullerenes?

At what level does nanochemistry work?

CORRECT ANSWER
At an atom level
EDDIE SAYS
Did you get off to a good start with this one? Did you know the term used in the third option -macroscale? This is a fairly large scale so it was unlikely to be the correct answer. If you're not sure of an answer, it is a good idea to try to eliminate other possible choices and see what you're left with. Nanochemistry works at an atom level as it deals with individual particles.

What is an allotrope?

CORRECT ANSWER
A substance created by different arrangements of the atoms of the same element
EDDIE SAYS
This is a pretty key piece of chemistry that you need to know, so it would be a good idea to check out the Introduction once more if you found this question tricky. It is possible to arrange atoms inside an element in different ways and so create allotropes of the same element. For example diamond, graphite and fullerenes are all allotropes of carbon which have different atomic structures.

Diamond, graphite and fullerenes are allotropes of which element?

CORRECT ANSWER
Carbon
EDDIE SAYS
This is an important fact to try to remember! Diamond, graphite and fullerenes are all allotropes of carbon - they are all made of carbon atoms but they are arranged differently and therefore have different properties.

Which allotrope of carbon is used to make pencils?

CORRECT ANSWER
Graphite
EDDIE SAYS
Graphite is used to make pencils. This is because it is made of flat layers that slide over each other and when some of the graphite slides off, can leave marks on pieces of paper.

How are diamonds used in the manufacturing and building industries?

CORRECT ANSWER
Cutting-tools
EDDIE SAYS
Diamonds are used for cutting-tools because they are so hard. The hardest substance known to exist, in fact!

What type of bonds link carbon atoms together?

CORRECT ANSWER
Covalent
EDDIE SAYS
It's important to try to get these two sorted out in your head because they are very different! Did you get this one correct? Carbon atoms in diamonds are linked together by covalent bonds, which means a chemical bond involving the sharing of pairs of electrons between atoms. Ionic bonds involve two oppositely charged ions, created by the gaining and losing of electrons from the outer shells of different atoms.

Which allotrope of carbon is shown in the diagram below?

CORRECT ANSWER
Fullerene
EDDIE SAYS
Make sure you know the different structures for the allotropes of carbon - this one looks a bit like a golf ball, doesn't it? It is the structure of fullerene.

What use of diamond is shown in the picture below?

CORRECT ANSWER
Industrial
EDDIE SAYS
This is an example of an industrial use for diamonds. The round cutting-tool quite possibly has diamonds around the edge of it, meaning that it is able to cut through incredibly hard materials.

Which allotrope of carbon is shown in the picture below?

CORRECT ANSWER
Graphite
EDDIE SAYS
How did you get on with this one? You know from the previous question that it can't be fullerene, so is it graphite or diamond? It is graphite. You can tell because of the layers and the square structure. The layers slip over each other easily and this is why it leaves a mark on a piece of paper, and hence why it is used to make pencils.

What type of substances are fullerenes?

CORRECT ANSWER
Black solids
EDDIE SAYS
These are the most obscure of all the allotropes of carbon, so don't worry if you found this question rather difficult. Fullerenes are black solids which are insoluble (do not dissolve) in water, but will dissolve in petrol. They are used to carry drug molecules around the body, and also trap and remove dangerous substances from the body. Their nanotubes are used in catalyst systems. Phew - you've reached the end of this activity. Hopefully, you are feeling a bit more familiar with this topic now.
---- OR ----