Atmospheric Pollutants and Their Effects

In this activity, students will learn about some pollutants produced by burning fuels. Students will learn how carbon monoxide, soot, sulfur dioxide and oxides of nitrogen are produced, what effects they have and how we can reduce the amounts of them. 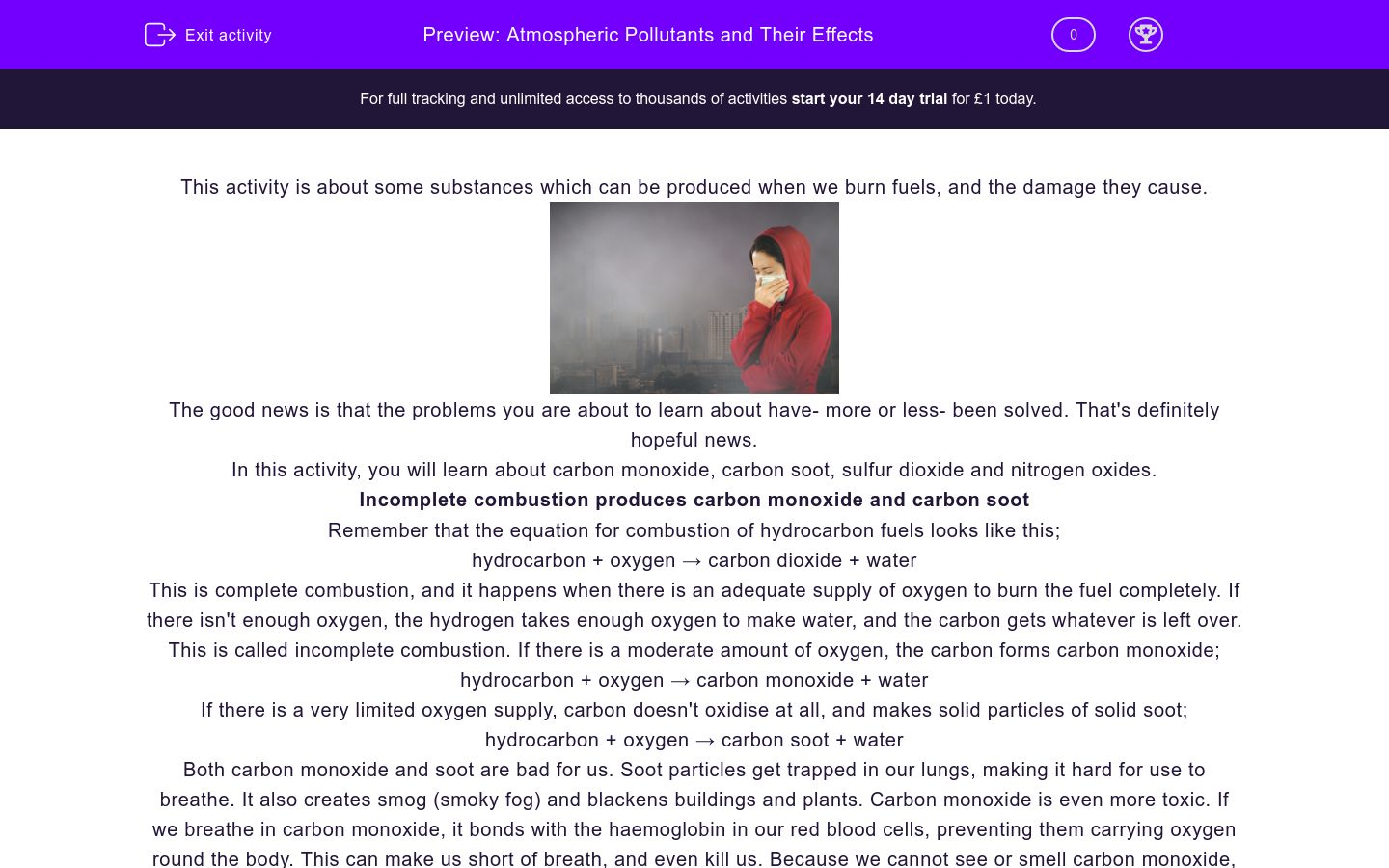 This activity is about some substances which can be produced when we burn fuels, and the damage they cause. 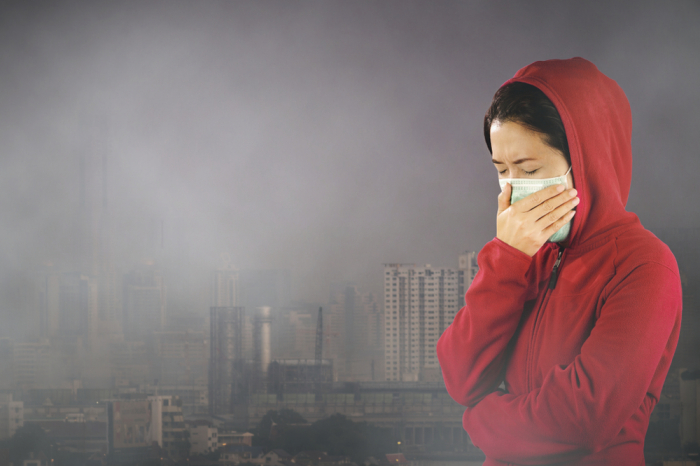 The good news is that the problems you are about to learn about have- more or less- been solved. That's definitely hopeful news.

In this activity, you will learn about carbon monoxide, carbon soot, sulfur dioxide and nitrogen oxides.

Remember that the equation for combustion of hydrocarbon fuels looks like this;

This is complete combustion, and it happens when there is an adequate supply of oxygen to burn the fuel completely. If there isn't enough oxygen, the hydrogen takes enough oxygen to make water, and the carbon gets whatever is left over. This is called incomplete combustion. If there is a moderate amount of oxygen, the carbon forms carbon monoxide;

If there is a very limited oxygen supply, carbon doesn't oxidise at all, and makes solid particles of solid soot;

Both carbon monoxide and soot are bad for us. Soot particles get trapped in our lungs, making it hard for use to breathe. It also creates smog (smoky fog) and blackens buildings and plants. Carbon monoxide is even more toxic. If we breathe in carbon monoxide, it bonds with the haemoglobin in our red blood cells, preventing them carrying oxygen round the body. This can make us short of breath, and even kill us. Because we cannot see or smell carbon monoxide, and it is so dangerous, many buildings have machines to monitor carbon monoxide levels, and alert us if there is any carbon monoxide in the air.

We can prevent carbon soot and carbon monoxide in two main ways. The best is to make sure that they aren't produced in the first place; provided fuels are burnt with a good, reliable oxygen supply, complete combustion will happen. Alternatively, we can use a catalytic converter (with a thin sheet of platinum as the catalyst) to convert carbon monoxide to carbon dioxide.

Chemically, hydrocarbon fuels contain hydrogen, carbon and nothing else. A lot of real fossil fuels (especially coal and oil) contain impurities, especially sulfur. If we burn a fuel containing sulfur, it will also react with oxygen;

Sulfur dioxide causes breathing problems in humans. It also reacts with rainwater to make sulfuric acid. This is one of the components in acid rain. Acid rain damages plants and buildings. This picture shows a forest suffering the effects of acid rain; 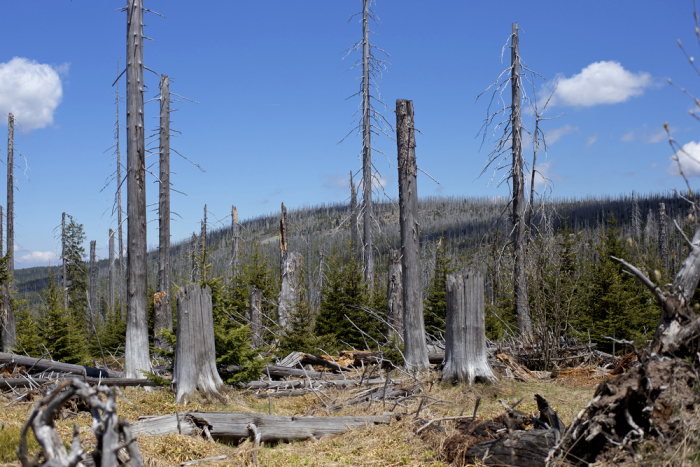 There are two ways to prevent the damage of sulfur dioxide. One is to burn fuels which don't contain sulfur impurities, or has been refined to remove the sulfur (e.g. clean coal). The other strategy is to capture the sulfur dioxide before it is released into the atmosphere. We can do this by reacting the gases produced by burning coal with limestone (calcium carbonate);

Calcium sulfite is useful, because it can be used to make a building material called gypsum.

In engines, we want fuel to react with oxygen from the air. Unfortunately, nitrogen in the air also reacts with oxygen at high temperatures;

Nitrogen monoxide and nitrogen dioxide together are often called nitrogen oxides, or NOx.

Nitrogen oxides cause breathing difficulties and can make nitric acid when they react with rainwater.

It's not easy to prevent nitrogen oxides being formed (though making engines less hot helps). To make sure that the nitrogen oxides don't reach the air, we can pass them through a platinum catalytic converter, which will convert them back into nitrogen and oxygen.

So- in this activity, you have learned about four pollutants. For each one, you know how they form, why they are a problem and how we can solve the problem. You will find it useful to convert that information into a table. The important message is that all of these pollutants have been big problems in the past, and people have found ways to solve those problems. That's good news!

Why is carbon soot harmful?

What substance in our body does carbon monoxide bind to?

Here are some ways of reducing the hazards of carbon monoxide. Match each solution with the reason it works.

What problems are caused by sulfur dioxide?

We can remove sulfur dioxide from gases by passing the gas through which substance?

The word equation for the sulfur dioxide + calcuium carbonate reaction is this;

Pick two half-equations to make a balanced symbol equation for this.

What useful material is calcium sulfite used to make?

When nitrogen oxides from, where does the nitrogen come from?

What metal is used for the catalyst in a catalytic converter?

Why is carbon soot harmful?

CORRECT ANSWER
makes buildings dirty
causes smog
damages lungs
EDDIE SAYS
Soot has several negative effects. On the other hand, we can see and feel soot when it's in the air, which helps us to manage its problems.

What substance in our body does carbon monoxide bind to?

CORRECT ANSWER
haemoglobin
hemoglobin
EDDIE SAYS
The job of haemoglobin is to carry oxygen around the body. That's why carbon monoxide is so dangerous; it takes up space in the blood which should be used to carry oxygen.

Here are some ways of reducing the hazards of carbon monoxide. Match each solution with the reason it works.

CORRECT ANSWER
EDDIE SAYS
Have a look back at the introduction if you're not sure about these. Depending on the situation, we will use different methods to prevent carbon monoxide poisoning, but the first thing to do is to prevent it forming in the first place.

What problems are caused by sulfur dioxide?

We can remove sulfur dioxide from gases by passing the gas through which substance?

CORRECT ANSWER
Limestone
EDDIE SAYS
Limestone is a mineral, calcium carbonate. Limewater is calcium hydroxide solution (it's the one that turns milky when it reacts with carbon dioxide). Lime juice is the juice from lime fruits (it's surprising how many people mix up lime juice and limewater).

The word equation for the sulfur dioxide + calcuium carbonate reaction is this;

Pick two half-equations to make a balanced symbol equation for this.

What useful material is calcium sulfite used to make?

CORRECT ANSWER
gypsum
EDDIE SAYS
Gypsum is used as a building material. It's important, because it meant that power stations had an incentive to remove sulfur dioxide from the gas they produced; they could sell it, instead of wasting it.

When nitrogen oxides from, where does the nitrogen come from?

CORRECT ANSWER
The atmosphere
EDDIE SAYS
Nitrogen oxides are a tricky problem to deal with, because the nitrogen is in the air, and that's why it is hard to prevent the oxides forming.

What metal is used for the catalyst in a catalytic converter?

CORRECT ANSWER
platinum
EDDIE SAYS
Platinum is a very effective catalyst for the reactions we need in car engines. It's a very expensive metal, but the amount needed for the converter is small (since the layer of platinum is very thin).
---- OR ----