In this worksheet, students will understand electrical current in terms of electron flow. We will also introduce equations to work out current and charge. 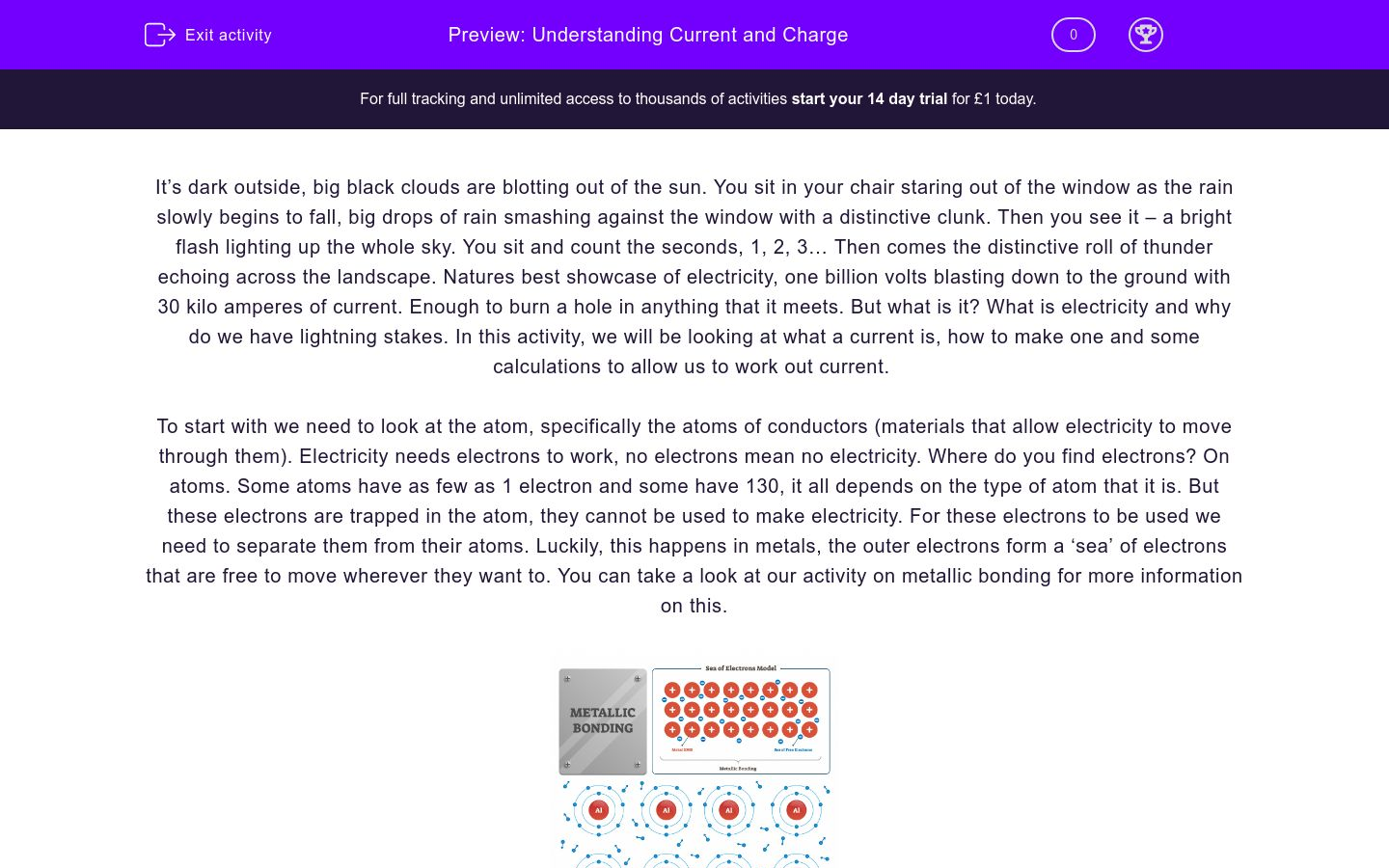 It’s dark outside, big black clouds are blotting out of the sun. You sit in your chair staring out of the window as the rain slowly begins to fall, big drops of rain smashing against the window with a distinctive clunk. Then you see it – a bright flash lighting up the whole sky. You sit and count the seconds, 1, 2, 3… Then comes the distinctive roll of thunder echoing across the landscape. Natures best showcase of electricity, one billion volts blasting down to the ground with 30 kilo amperes of current. Enough to burn a hole in anything that it meets. But what is it? What is electricity and why do we have lightning stakes. In this activity, we will be looking at what a current is, how to make one and some calculations to allow us to work out current.

To start with we need to look at the atom, specifically the atoms of conductors (materials that allow electricity to move through them). Electricity needs electrons to work, no electrons mean no electricity. Where do you find electrons? On atoms. Some atoms have as few as 1 electron and some have 130, it all depends on the type of atom that it is. But these electrons are trapped in the atom, they cannot be used to make electricity. For these electrons to be used we need to separate them from their atoms. Luckily, this happens in metals, the outer electrons form a ‘sea’ of electrons that are free to move wherever they want to. You can take a look at our activity on metallic bonding for more information on this.

When you have got some electrons that you can move around, you then need to actually start moving them. This is where our idea of charge comes in and it is quite important here. Electrons are negatively charged, and they are normally attracted to the positively charged nucleus of the atom (where the protons and neutrons live). This is because opposite charges attract each other. When we have removed the electron from the atoms, all we need to do to move them is to place them near a positive charge, the electrons will flow towards that charge. That opposite is true as well, if you place a negative charge near them then they will move away from that charge.

When these electrons are flowing you have a current. The definition of current is ‘the number of electrons passing a point per second’ so the more electrons there are, the more current there is. Let’s think about our lightning again. The electrons must have been free to move in the clouds – this happens because when ice particles collide with other ice particles then it frees up some electrons. There must have been an opposite charge or a similar charge near them – both in this case, the ground is the opposite charge pulling the electrons down and the cloud is the similar charge pushing the electrons away. This then gives us enough energy to have a whole bunch of electrons moves from the cloud to the ground. That is your lightning strike.

Now, how many electrons are in a lightning strike? Well, we can work out the amount of charge by using our handy equation Q = It, or are it is fondly known the QUIT equation.

Step 1 – highlight all of the number in the equation:
There is a current of 3 A in a wire for 10 s. Calculate the charge in the wire.

Step 2 – Write out the numbers next to their symbols:

Step 3 – put the numbers into the equation:

Step 4 – do the maths and write your answer:

Let's try some questions on that!

Why are conductors able to allow an electrical current to pass through them?

What is the definition of current?

How amny electrons there are.
How metalic an object is.
How much space there is for the electrons to move.
How many electrons are passing a point per second.

A circuit had a current of 2 A and is left on for 10 s. Calculate the charge that flows through the circuit.

A formula e car has a current of up to 12 A, and a single lap can last about 45 seconds. Calculate the charge used by a formula e car over a lap.

Match the value to the unit

What happens to two charges that are both negative when you put them close together?

They attract
They repel

Calculate the charge when a current of 3A moves for 2 minutes. Include the unit in your answer.

Calculate the charge when a current of 1.2 A flows for 4 minutes. Include the units in your answer.

What happens when you put a like an an unlike charge together?

They attract
They repel

Why are conductors able to allow an electrical current to pass through them?

CORRECT ANSWER
Electrons are delocalised from their atoms.
EDDIE SAYS
Another word for when electrons are not fixed into their atoms is delocalized - this means they are not local to the atom anymore. Because of this, they are able to move around and this means that the material con conducts the electricity. This happens in all metals and some other materials.

What is the definition of current?

CORRECT ANSWER
How many electrons are passing a point per second.
EDDIE SAYS
This is one of those definitions that you need to remember - it helps to remember the equation (this will come up in some other questions). The current is the amount of change (or the number of electrons) passing the point every second - there is your definition. Get it? Got it? Good!

CORRECT ANSWER
EDDIE SAYS
So, you have to remember this equation. This type of question comes up a lot in exam papers as a way of testing if you can remember the equations they want you to remember. They will give you all three of the things you need to include int eh question, you just have to put them together in what you think is the right order. If in doubt, put anything involving all three!

A circuit had a current of 2 A and is left on for 10 s. Calculate the charge that flows through the circuit.

A formula e car has a current of up to 12 A, and a single lap can last about 45 seconds. Calculate the charge used by a formula e car over a lap.

CORRECT ANSWER
540C
540 C
EDDIE SAYS
Did you remember that Coulombs has a capital C? Little things like this are important, believe it or not! We have definitely seen people lose marks because they can't remember the difference between them. So, if we follow our procedure, you should have done the following! Q = ? I = 12 A t = 45 S Q = 12 x 45 Q = 540 C. Remember the units!

Match the value to the unit

CORRECT ANSWER
EDDIE SAYS
As always, these values need to be learned to be able to spot them in a question. Once you've found them in question then you can put them into the equation and then you'll be awesome! Everyone will be totes jell of your amazing science skills!

What happens to two charges that are both negative when you put them close together?

Calculate the charge when a current of 3A moves for 2 minutes. Include the unit in your answer.

Calculate the charge when a current of 1.2 A flows for 4 minutes. Include the units in your answer.

What happens when you put a like an an unlike charge together?

CORRECT ANSWER
They attract
EDDIE SAYS
Like charges attract and unlike charges repel. If you want to move a charge from one place to another then all you need to do is to place an opposite charge near it and it will be attracted toward it! Just like magic, or magnets...
Try it for free ---- OR ----