In this worksheet, students will look at the equation for density and understand how to measure density. 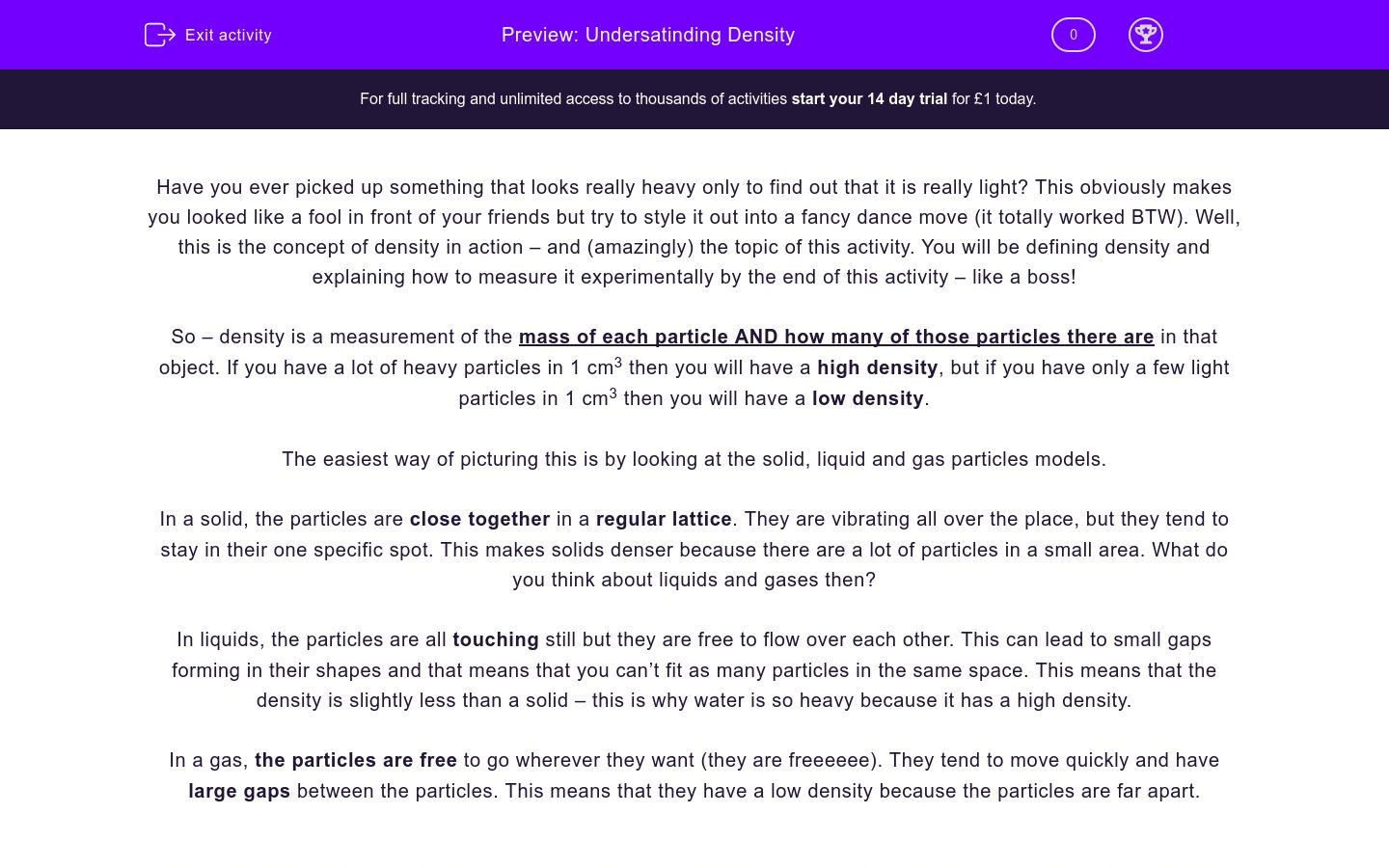 Have you ever picked up something that looks really heavy only to find out that it is really light? This obviously makes you looked like a fool in front of your friends but try to style it out into a fancy dance move (it totally worked BTW). Well, this is the concept of density in action – and (amazingly) the topic of this activity. You will be defining density and explaining how to measure it experimentally by the end of this activity – like a boss!

The easiest way of picturing this is by looking at the solid, liquid and gas particles models.

In a solid, the particles are close together in a regular lattice. They are vibrating all over the place, but they tend to stay in their one specific spot. This makes solids denser because there are a lot of particles in a small area. What do you think about liquids and gases then?

In liquids, the particles are all touching still but they are free to flow over each other. This can lead to small gaps forming in their shapes and that means that you can’t fit as many particles in the same space. This means that the density is slightly less than a solid – this is why water is so heavy because it has a high density.

So that is an overview of density – now how about we look at how to measure density in a lab. This is a common question, so you need to remember this method of measuring density. Let's start off by thinking about how you would measure density? Well, we know it is the mass of the particles and how many there are in an area. This means that we need to use a divide – what do you think it should be?

This is the equation:

Working out the mass is simple; you just need to put it on a top pan balance and read off the measurement that it gives you (making sure that you zero the balance to start off with).

The volume isn’t all that difficult, all you need to do is measure the length, width, and depth of the object. You then multiply these numbers together and you get your volume.

So, our density is:

DON’T FORGET the units! Always put them in unless the question tells you otherwise!

And that’s it! Now you are a master of density! Let’s put your newfound knowledge to the test!

Which of these states of matter has the highest density?

What happens to the density of an object when you cool it?

It increases
It decreases
Nothing

An object is heated. Describe  and explain what happens to its density by talking about the particles (3 marks)

Describe how to calculate the volume of a cube (2 marks).

Calculate the density of this cube. 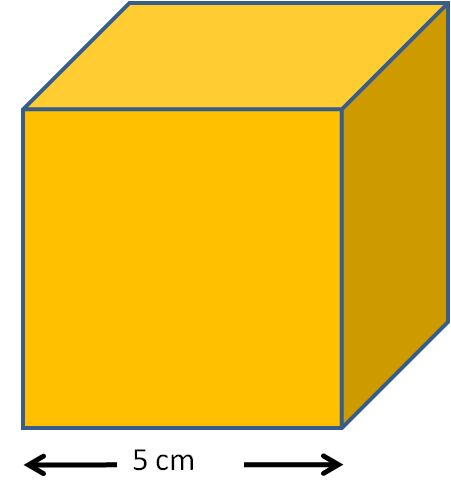 CORRECT ANSWER
The amount of mass per unit area
EDDIE SAYS
This is one of those definitions that you need to remember - you'll find there are a lot of these in science (it's like learning a new language!). These are important, because in science when we say things we are very specific about what we mean. So if a question asks you about density, then it is asking you about this and only this.

Which of these states of matter has the highest density?

CORRECT ANSWER
EDDIE SAYS
You don't really need to remember the symbols (especially Rho (ρ)) but you do need to be able to match the words to their symbols. This will make it easier for you to find the information needed in an exam question making it easier to answer the exam question. Everyone likes tricks that make answering the question easier, right?! So learn to match them together and you'll be well away!

What happens to the density of an object when you cool it?

CORRECT ANSWER
It increases
EDDIE SAYS
When you cool an object, what you are doing is stopping the particles from vibrating as much - this is what heat is, how much particles are vibrating. If the particles are vibrating less, they are taking up less space, this means that the volume of the whole object is going to go down. If you have the same mass in a smaller volume, then your density is going to go up. The correct answer here is increases.

An object is heated. Describe  and explain what happens to its density by talking about the particles (3 marks)

CORRECT ANSWER
EDDIE SAYS
This question has an 'explain' in it - this means you need to have a BECAUSE in your answer. In this question, you needed to use the 'because' in the part where you were linking the change in volume to density. Let's have a look in a little more detail - heating is making the particles vibrate more, heating is all about vibrating those particles. The more the particles vibrate, the more space they will take up. This will increase the volume. That is the description part done - I have stated facts. Now I need to make a link between the volume and the density. Because the density is increased and the mass has not changed, the density will decrease.

Describe how to calculate the volume of a cube (2 marks).

CORRECT ANSWER
EDDIE SAYS
This question is all about seeing if you can remember how to calculate the volume of a regular object. There are 2 basic steps that you need to take for this question (you might have guessed this by the 2 marks :O) 1 - find the length, width d breadth of an object. Normally measuring them with a ruler. 2 - multiply them together to get your density. Boom - done!

Calculate the density of this cube.

CORRECT ANSWER
EDDIE SAYS
Did you get it? There was one option from each of the three states of matter! Oxygen (the gas) was the least dense, because it is a gas. Then it was ethanol because it is a liquid. Finally, aluminium because it is solid.
Try it for free ---- OR ----