In this worksheet, students will calculate the density of irregular objects. Students will also learn how to manipulate equations in physics to solve problems. 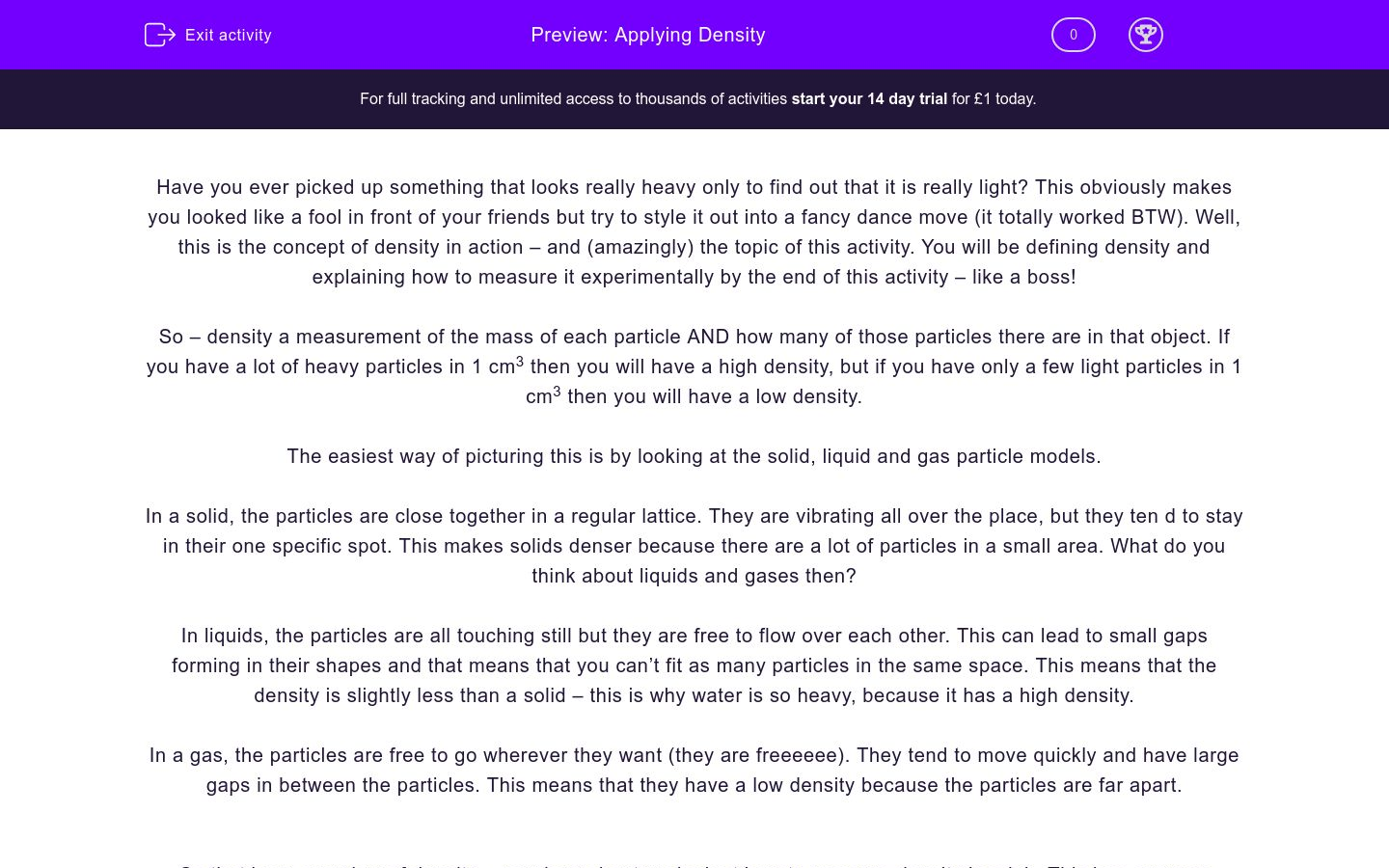 The easiest way of picturing this is by looking at the models for solid, liquid and gas particles.

In a solid, the particles are close together in a regular lattice. They are vibrating all over the place but they tend to stay in their one specific spot. This makes solids denser because there are a lot of particles in a small area. What do you think about liquids and gases then?

In liquids, the particles are all touching still but they are free to flow over each other. This can lead to small gaps forming in their shapes and that means that you can’t fit as many particles into the same space. This means that the density is slightly less than that of a solid.

So that's density – but how can we measure it?   Fortunately, there is a very important equation to help us out here:

The sign ρ is the Greek letter rho – in this case it stands for density (because d was already used…), m is obviously mass and V is volume (as in how much space it takes up, not how loud it is…).

If you know the unit of measurement of the thing you are trying to find, you can normally work out what needs to go into the equation to find the answer. For example, if you are asked to work out a speed in m/s, then you know that the equation you need is m divided by s.

Now let’s look at how to find the density of an irregular object.

Let’s say you have a rock – how will you work out the density of that object using this equipment?

What do we need to know in order to calculate the density? It’s the mass and volume, right? So mass is nice and easy, you just put the rock on the balance and hey presto – there is your mass. For volume, it would be easy if it was a regularly shaped object, but it’s not. This is a problem that was solved by Archimedes back in the Ancient Greek times. He sat in the bath and saw the water spill out over the side – what he realised was that the amount of water that came out of the bath was the same as his volume – so all we need to do is make a fancy bath that will collect the water as it spills out.

This is an Archimedes or eureka can – and it measures the water displaced by an irregular object. In this case, we put the rock in and measure the amount of water in millilitres (ml) that comes out. 1 ml = 1 cm3.

All you need to do then is take your measurements and divide the mass by the volume and you’ve got your density!

One important point though - this only works for objects that sink!

Are you ready to tackle some questions now?

Describe the steps that need to be taken in measuring the density of a regular object.

Talk about the equipment as well as how you would use it.

Describe and explain which state of matter has the highest density.

Match the symbols to their units for the density equation.

An object has an original density of 1 kg/m3 and is then heated. Its new volume after heating is 0.8 m3.

Calculate the change in density of the object.

Describe what happens to the density of an object as you heat it.

Describe how to find the density of an irregular object.

Some objects float in water.

Explain why it would not be suitable to use an Archimedes can to measure the volume of these objects.

CORRECT ANSWER
EDDIE SAYS
Did you struggle with this one? It does seem tricky at first but when you think about it, it is actually obvious! Remember how to measure the volume of an irregular shaped object? You have to put it into the special Archimedes can and measure how much water is displaced. Once you've done this, the object is going to be wet! The addition of water to the object will make a slight change (however small) to its mass and will therefore give a false reading. Therefore, it is important that you measure the mass before getting the object wet. It makes sense really.

Describe the steps that need to be taken in measuring the density of a regular object.

Talk about the equipment as well as how you would use it.

CORRECT ANSWER
EDDIE SAYS
This is for a regular object, so all you need to do is use a ruler to measure the size of it and then convert this into the volume. Next, use a balance to find the mass - not a scale to get the weight, we are working with mass and not weight. We use a balance and not scales in science! Picky terminology but important! Finally, divide the mass by the volume and you should have found the density!

CORRECT ANSWER
The amount of mass per unit area
EDDIE SAYS
This is one of those definitions that you need to remember - you'll find there are a lot of these in science. These are important because, in science, when we say things we need to be very specific about what we mean. If you weren't totally sure about this one, then spend some time learning it so that it is really secure in your head.

Describe and explain which state of matter has the highest density.

Match the symbols to their units for the density equation.

CORRECT ANSWER
EDDIE SAYS
You need to be able to match the words to their symbols. This will make it easier for you to find the information needed in an exam question and everyone likes tricks that make answering the question easier, don't they?

An object has an original density of 1 kg/m3 and is then heated. Its new volume after heating is 0.8 m3.

Calculate the change in density of the object.

Describe what happens to the density of an object as you heat it.

CORRECT ANSWER
EDDIE SAYS
Think about what heat is - it is simply how much particles are vibrating. If you heat up an object, you are making the particles move around more, and this makes stuff happen to the object. The object will grow (thermal expansion) because each particle is taking up more space. This means that the volume has increased. If there is a higher volume but the mass is unchanged, then the density is going to go down.

Describe how to find the density of an irregular object.

CORRECT ANSWER
EDDIE SAYS
This is the kind of question that will be followed up by asking you about accuracy or other experimental skills. For more information on this, take a look in our skills section! Basically, this question is testing you to see if you know how to use an Archimedes (or eureka) can to measure the volume. If you see the term 'irregular object', you should always think Archimedes (or eureka) can.

Some objects float in water.

Explain why it would not be suitable to use an Archimedes can to measure the volume of these objects.

CORRECT ANSWER
EDDIE SAYS
In order for this can to work, you need to have an object submerged. If the object is not submerged, then it will not be displacing the water. This means that you will not be measuring the volume of the object from that point! How do you feel about this topic now, having completed ten questions on it? If you're still finding it a bit challenging, why not reread the Introduction and maybe have another go at some of the questions you found tricky.
Try it for free ---- OR ----