In this worksheet, students will learn how emission spectroscopy works, and how it is used to identify elements in unknown substances. 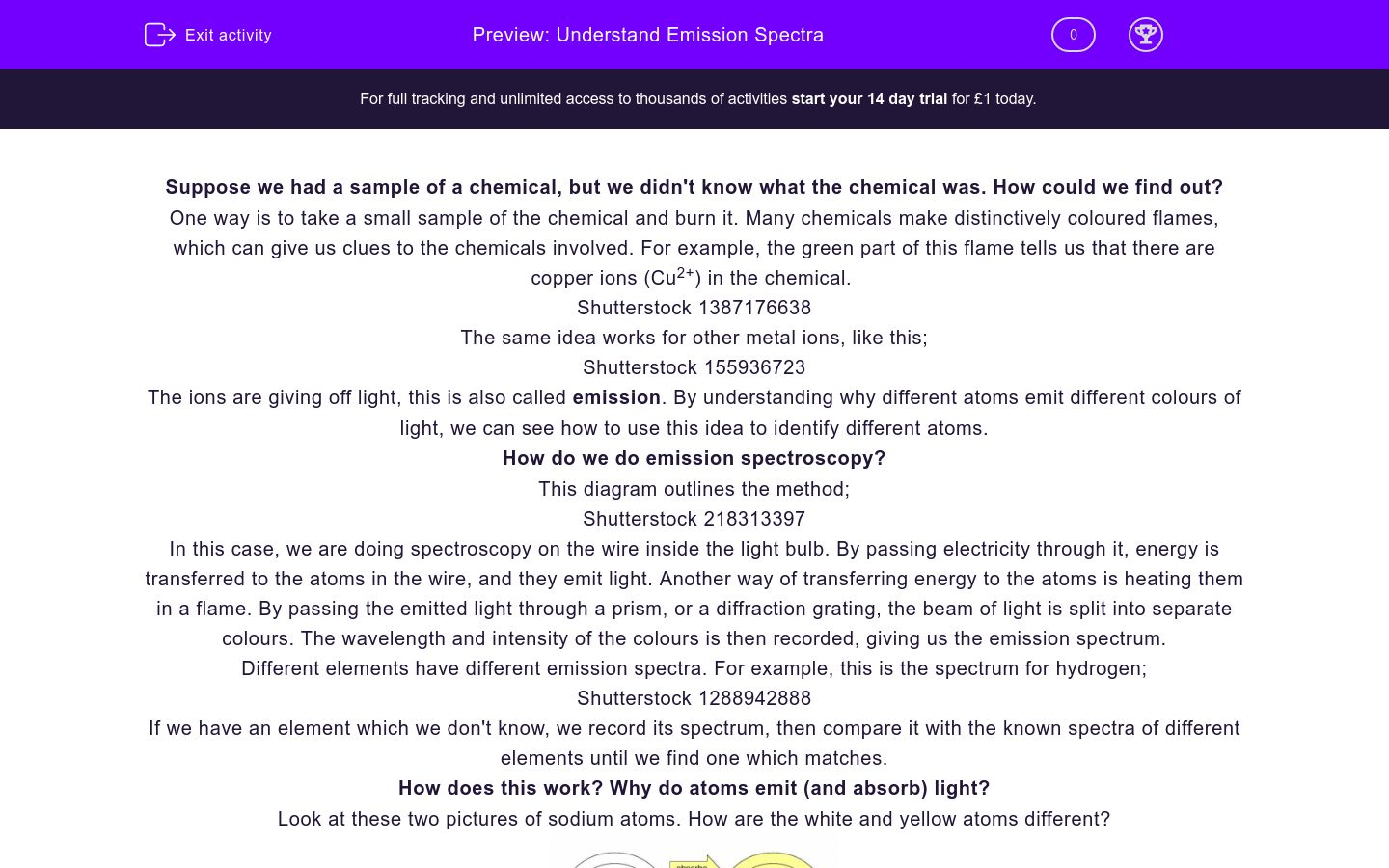 Suppose we had a sample of a chemical, but we didn't know what the chemical was. How could we find out?

One way is to take a small sample of the chemical and burn it. Many chemicals make distinctively coloured flames, which can give us clues to the chemicals involved. For example, the green part of this flame tells us that there are copper ions (Cu2+) in the chemical.

The same idea works for other metal ions, like this;

The ions are giving off light, this is also called emission. By understanding why different atoms emit different colours of light, we can see how to use this idea to identify different atoms.

How do we do emission spectroscopy?

This diagram outlines the method;

In this case, we are doing spectroscopy on the wire inside the light bulb. By passing electricity through it, energy is transferred to the atoms in the wire, and they emit light. Another way of transferring energy to the atoms is heating them in a flame. By passing the emitted light through a prism, or a diffraction grating, the beam of light is split into separate colours. The wavelength and intensity of the colours is then recorded, giving us the emission spectrum.

Different elements have different emission spectra. For example, this is the spectrum for hydrogen;

If we have an element which we don't know, we record its spectrum, then compare it with the known spectra of different elements until we find one which matches.

How does this work? Why do atoms emit (and absorb) light?

Look at these two pictures of sodium atoms. How are the white and yellow atoms different? 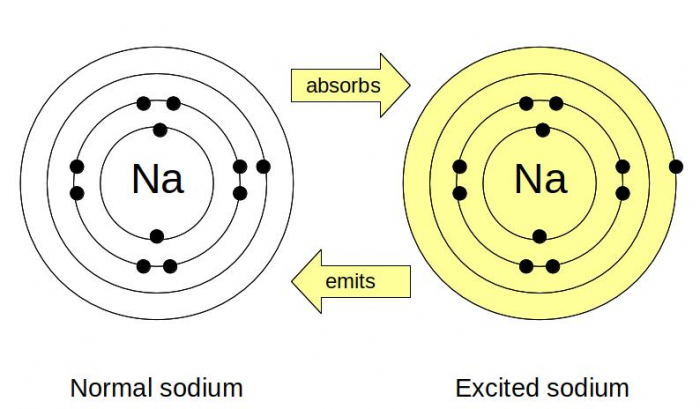 They're both sodium atoms, they both have eleven electrons. The normal sodium atom (the white one, on the left) has the electrons in the normal configuration- 2 in the first shell, 8 in the second and 1 in the third. This is also called the ground state of sodium. In the excited sodium atom (the yellow one, on the right), the electron in the third shell has moved into the fourth shell. For this to happen, the atom must have absorbed some energy. When the electron jumps back to its normal (ground state) position, the energy is released again. If the atom absorbs energy, we say it is excited; if it releases energy, we say it is de-excited. The energy transfers in and out of the atom as a paricle of light, called a photon. The exact colour of the photon depends on the amount of energy being absorbed or emitted, which depends on the exact energy levels of the different electron shells. What that means is that every different atom or ion has a set of unique set of colours of light which it can absorb and emit. The colour we see in a flame test is a combination of all those colours.

Emission spectroscopy is a way of making flame tests more exact. Instead of just looking at the colour, we break it into its components. This lets us be much more sure about exactly what elements are present in a sample. It's also much easier to detect elements at very low concentrations. Their colours might get swamped by brighter colours in a flame test, but will show up separately in an emission spectrum.

In emission spectroscopy, we need to transfer energy into the sample before it gives off light. How can we do this?

What methods can be used to split a beam of light into different colours?

What is the scientific term for the normal state of an atom?

What is the scientific term for an atom which stores extra energy, because electrons have moved out of the ground state?

What does the intensity of an emission line tell us?

What is the name of a particle of light?

Which method is better for detecting very low concentrations of an element in a sample?

When atoms (or ions) become excited, is it because they have absorbed or emitted energy?

What does the colour of a photon tell us?

In emission spectroscopy, we need to transfer energy into the sample before it gives off light. How can we do this?

CORRECT ANSWER
heat
electricity
EDDIE SAYS
We need to transfer energy into atoms, in exactly the right amounts. We can do this with thermal energy (think how hot objects glow), or by using electrical heating.

What methods can be used to split a beam of light into different colours?

What is the scientific term for the normal state of an atom?

CORRECT ANSWER
ground
ground state
EDDIE SAYS
Think about a ball. Normally, it will keep falling until it hits the ground; the ground is the lowest energy state it can be in. The same thing works for electrons in an atom; we can lift them up, but they naturally fall back until they are in the ground state.

What is the scientific term for an atom which stores extra energy, because electrons have moved out of the ground state?

CORRECT ANSWER
excited
excited state
EDDIE SAYS
When the electrons move out of their ground state, we call that excited. This happens when the electrons are given exactly the right amount of energy.

What does the intensity of an emission line tell us?

CORRECT ANSWER
The concentration of the atom in the sample
EDDIE SAYS
The more atoms (or ions) of a given type in the sample, the stronger their emission lines will be in the spectrum.

What is the name of a particle of light?

CORRECT ANSWER
photon
EDDIE SAYS
The idea of photons is (again!) a bit physics-y, but it's relevant for this bit of chemistry as well. The important bit is that each photon is a very exact amount of energy, and the colour of the photon is linked to how much energy.

Which method is better for detecting very low concentrations of an element in a sample?

CORRECT ANSWER
emission spectroscopy
EDDIE SAYS
If we look at a flame, we can only really see one colour- the main one. This is fine to see the most abundant ion in the sample, but it won\'t tell as about ones present in small concentrations.

When atoms (or ions) become excited, is it because they have absorbed or emitted energy?

CORRECT ANSWER
absorbed energy
EDDIE SAYS
The excited states involve higher energy than the ground state, so an atom has to absorb energy to get into them.

What does the colour of a photon tell us?