In this worksheet, students will examine the properties of different types of waves and how they are used to aid communication. 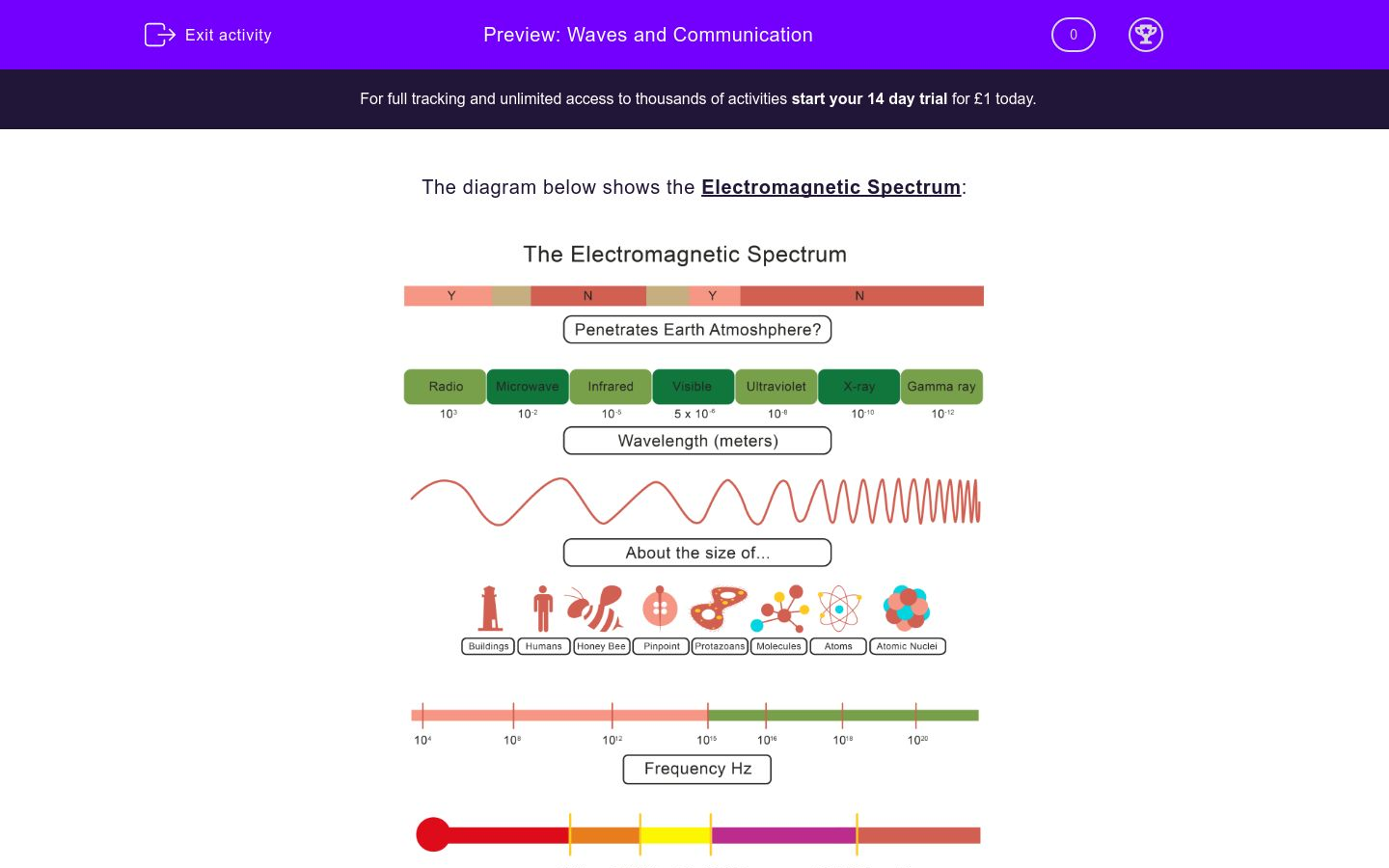 Curriculum subtopic:   Waves in Air, Fluids and Solids, Resources of Materials and Energy, What Are the Risks and Benefits of Using Radiation?, Wave Behaviour, Waves, Waves at Material Interfaces: Applications in Exploring Structures

The diagram below shows the Electromagnetic Spectrum:

Radiowaves, light and microwaves are part of this family of waves. They are used for heating and cooking food, but they are also used in communication technology.

Microwaves are used for mobile phones, satellite TV and long distance communication. Microwave aerials are on high buildings, because transmitters and receivers have to be in 'line of sight'.

Satellites orbiting the Earth are in line of sight with a huge aerial on the ground, which handles a great number of phone calls and television pictures at the same time.

Many people worry about the position of aerials and the excessive use of mobile phones, due to concerns about the possible risk of cancer. Young people who are still developing are at higher risk of being affected. Microwave signals can interfere with medical equipment and they must be switched off in hospitals.

Infrared signals are used to make remote controls, wireless computer mice and security alarm sensors work. Signals emitted by remote controls are digital signals, which only have two values (on and off) and that can minimise the effect of interference.

Radiowaves are also useful for wireless technology and the radio. They are reflected off solid surfaces, so sometimes provide signals in hard to reach areas.

Light has many uses, including communication, and can be sent with just a torch. This type of signal needs to be decoded. Sound is not part of the Electromagnetic Spectrum, but it is still a wave and widely used in communication. Humans and other animals can communicate using sound.

Waves have some properties: amplitude, wavelength, frequency and speed. Study the diagram as some questions will be about the properties of waves. The speed of a wave is calculated using the following formula:

What is the Electromagnetic Spectrum?

Tick two types of waves that are used in communication.

What sends a microwave signal?

A receiver
A transmitter
A laser

What is the appropriate position of transmitters and receivers?

What are the dangers of heavy mobile phone use and aerials built near populated areas?

What type of signals are emitted by remote controls?

What effect does this type of signal minimise?

How would you define the frequency of a wave?

How would you define wavelength?

What is the Electromagnetic Spectrum?

Tick two types of waves that are used in communication.

What sends a microwave signal?

CORRECT ANSWER
A transmitter
EDDIE SAYS
Transmitters send microwave signals. but not just Microwaves- they send any type of wave. You could say that they TRANSMIT the waves.

What is the appropriate position of transmitters and receivers?

CORRECT ANSWER
In line of sight
EDDIE SAYS
Transmitters and receivers have to be in line of sight. If you think about visible light, these are all on the same family - so if they can't 'see' each other, then they are not going to be able to get their signal!

What are the dangers of heavy mobile phone use and aerials built near populated areas?

What type of signals are emitted by remote controls?

CORRECT ANSWER
Digital
EDDIE SAYS
Remote controls emit digital signals. This is because they work with computers (your TV is a small computer). Anything that uses computers needs to use digital.

What effect does this type of signal minimise?

CORRECT ANSWER
Interference
EDDIE SAYS
Digital signals minimise interference because the signal can only be on or off. this means that there is much less confusion about what the signal is trying to say.

How would you define the frequency of a wave?

How would you define wavelength?