In this worksheet, students will explore the Electromagnetic Spectrum, its uses and how it affects our lives. 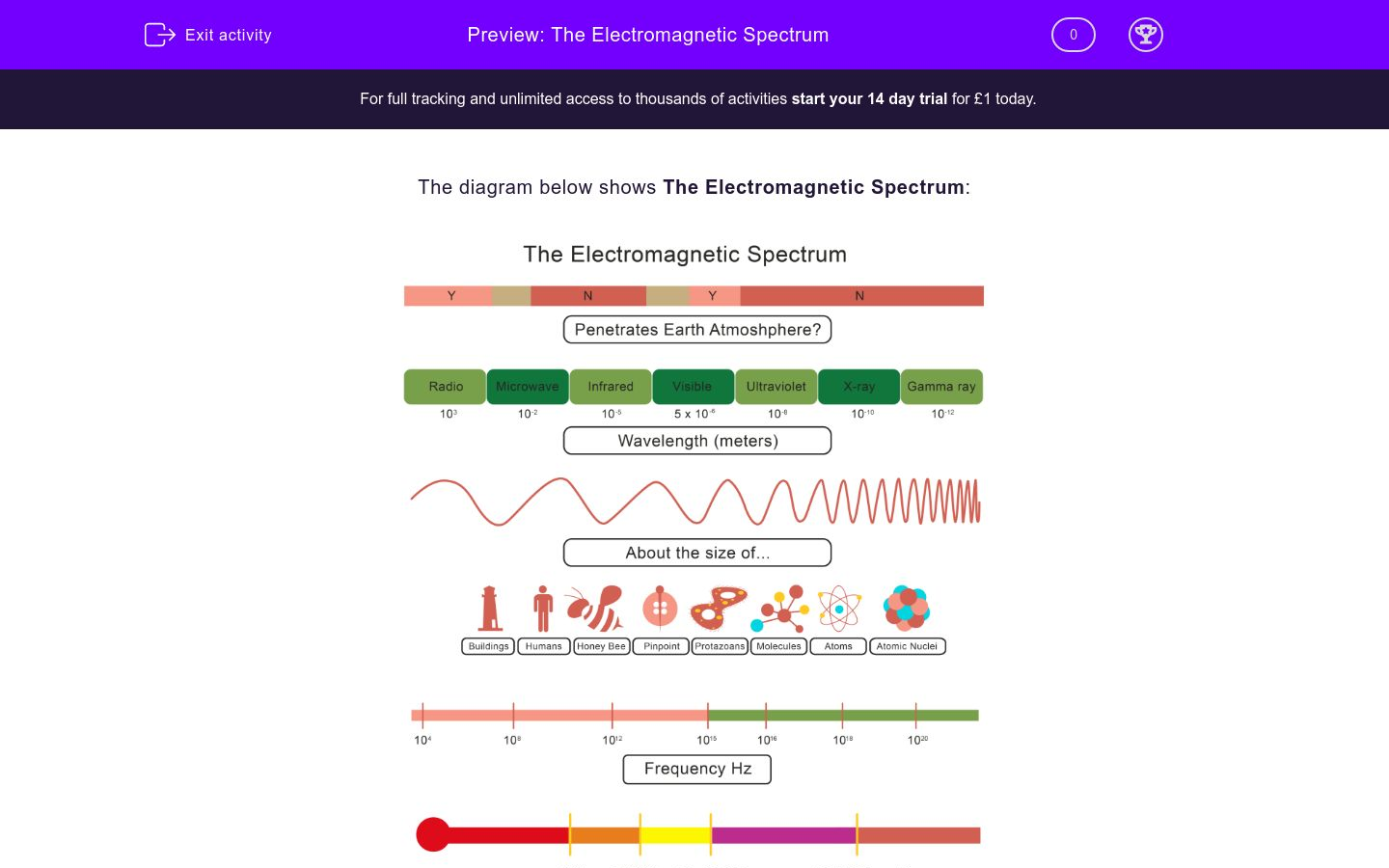 The diagram below shows The Electromagnetic Spectrum:

It is a family of waves. Waves have the following properties: amplitude, wavelength, frequency and speed. Study the diagrams below, as some questions in this worksheet will be about the properties of waves. The speed of a wave is calculated using the following formula:

The Electromagnetic Spectrum is actually radiation emitted from the nucleus of an atom.The wavelength decreases as we go towards the gamma ray end of the spectrum. Gamma radiation and X-rays are used for screening, diagnosis and therapy. They are both very penetrating and can pass through the body to treat internal organs. Nuclear radiation increases the risk of cancer due to causing ionisation, which means it changes the structure of atoms and, hence, living cells. However, it can be used to kill tumour cells after they are exposed to it with radiotherapy; for example, using Cobalt-60: a very radioactive material that emits gamma radiation. It is also used to sterilise medical equipment.

When exposing tumour cells in the body to kill them, there is a danger of destroying healthy tissue, too. Therefore, treatment is set up in such a way, so as to constantly send a large dose of radiation to the tumour, but to only send intermittent, smaller doses to the surrounding healthy tissue.

Technetium-99m and Iodine-123 are two radioactive materials used for screening.

Microwaves are used for heating and cooking food, mobile phones, satellite TV and long distance communication. They penetrate about 1cm into the outer layers of food. Microwave aerials are located on high buildings, because transmitters and receivers have to be in 'line of sight'. Satellite dishes are microwave receivers which deliver satellite television channels. Satellites orbiting the Earth are in line of sight with a huge aerial on the ground, which handles a great number of phone calls and television pictures at the same time.

Infrared signals are used to make remote controls, wireless computer mice and security alarm sensors. Radiowaves are also useful for wireless technology and the radio. They are reflected off solid surfaces, so sometimes provide signals in hard to reach areas. Light has many uses, including communication, and can be sent with just a torch. This type of signal needs to be decoded. Visible light is the light from the Sun or even artificial light bulbs, which helps us see what is around us and the different colours. We can only see the visible part of the Electromagnetic Spectrum, but none of the other waves.

What do we call the family of waves that have many uses in our lives?

How would you describe the ampitude of a wave?

What part of the Electromagnetic Spectrum has the smallest wavelength?

Tick the two most penetrating rays that are used to treat internal organs.

What is the name of the process that uses radiation to kill cancer cells?

How do radiologists ensure that healthy tissue is not damaged during radiotherapy, but tumour cells are killed? Tick two boxes.

What type of radiation is used for remote controls?

What is visible light?

What do we call the family of waves that have many uses in our lives?

How would you describe the ampitude of a wave?

What part of the Electromagnetic Spectrum has the smallest wavelength?

Tick the two most penetrating rays that are used to treat internal organs.

CORRECT ANSWER
X rays
Gamma
EDDIE SAYS
The two most penetrating rays that are used to treat internal organs are gamma radiation and X-rays. These ones are also ionising and can cause further damage themselves. But the risks of not spotting an internal injury outweigh the risks of maybe causing more damage.

What is the name of the process that uses radiation to kill cancer cells?

CORRECT ANSWER
Radiotherapy
EDDIE SAYS
Radiotherapy is used to kill cancer cells. it is a high dose of gamma radiation that kills cells, but only the ones that are in the target areas - it leaves the other ones alone (mostly). Isn't science amazing?

How do radiologists ensure that healthy tissue is not damaged during radiotherapy, but tumour cells are killed? Tick two boxes.

CORRECT ANSWER
Cooking food
Satellite TV
Mobile phones
EDDIE SAYS
Microwaves are used for cooking food, satellite TV and mobile phones. This makes some people worry about your mobile phones cooking your brain, but because they use different types of microwaves, this doesn't happen.

What type of radiation is used for remote controls?

CORRECT ANSWER
Infrared
EDDIE SAYS
Infrared signals are used for remote controls. it is just below the visible light section, hence the term infra. Infra means below, and ultra means above.

What is visible light?