Understand Sound Waves and their Properties

In this worksheet, students will learn about sound waves. This requires calculating the speed of sound and exploring the uses of sound waves. 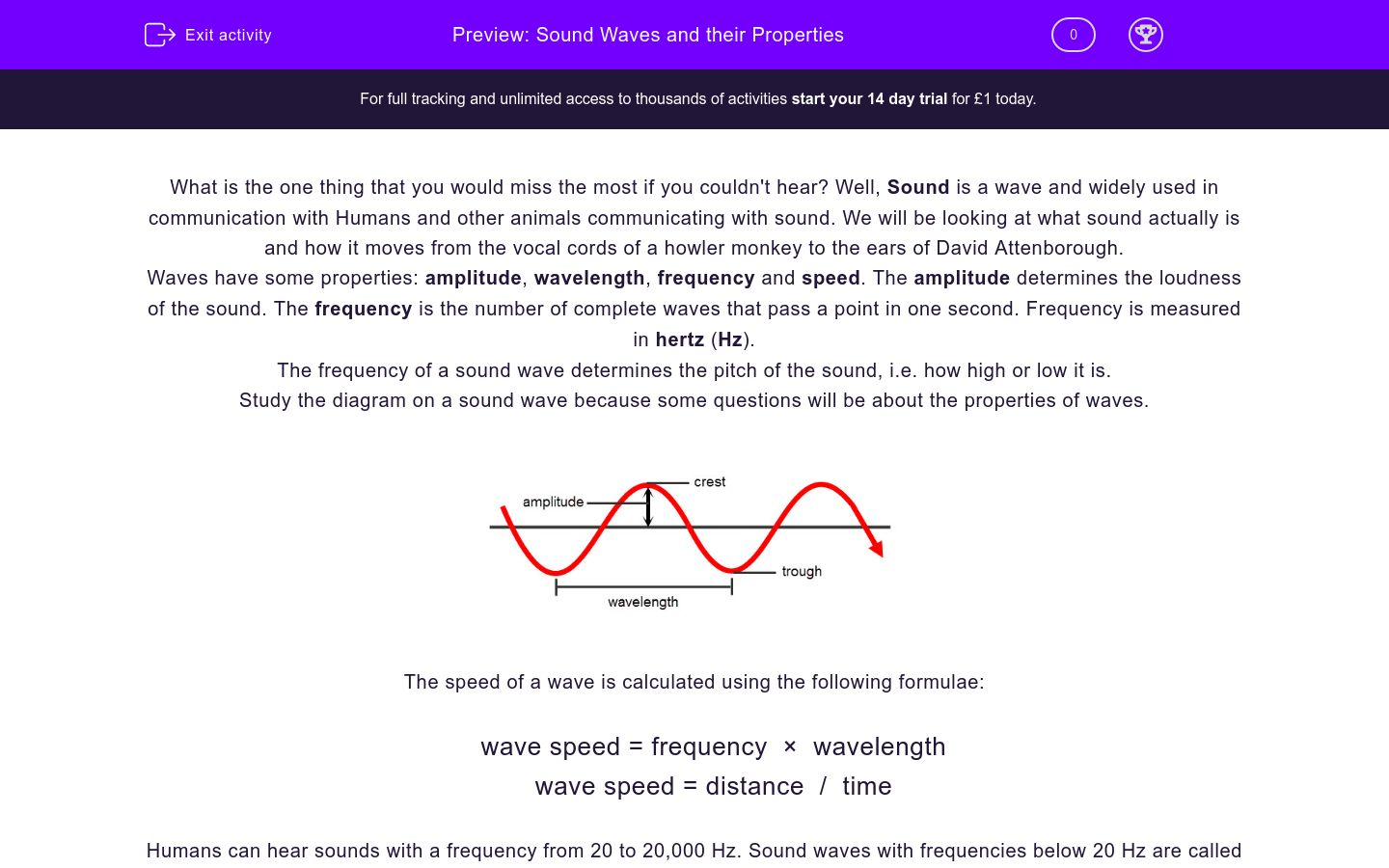 What is the thing that you would miss the most if you couldn't hear? The most important use for sound is in communicating with others. Sound is a wave and widely used in communication with humans and other animals. We will be looking at what sound actually is and how it moves from the vocal cords of a howler monkey to the ears of David Attenborough.

Waves have some properties: amplitude, wavelength, frequency and speed. The amplitude determines the loudness of the sound. The frequency is the number of complete waves that pass a point in one second. Frequency is measured in hertz (Hz).

The frequency of a sound wave determines the pitch of the sound, i.e. how high or low it is.

Study the diagram of a sound wave below so that you will be able to answer the questions in this activity.

The speed of a wave is calculated using the following formulae:

Humans can hear sounds with a frequency of between 20 and 20,000 Hz. Sound waves with frequencies below 20 Hz are called infrasound. Some animals like elephants and giraffes communicate using infrasound. Whales also communicate with infrasound and their calls can travel for hundreds of kilometres in the ocean because infrasound waves travel further than sound waves of higher frequencies.

Infrasound is used for studying animals and detecting volcanic eruptions.

Ultrasound is sound made by waves with frequencies higher than 20,000 Hz. Dolphins use ultrasound to communicate and bats use sonar (sending ultrasound waves, which are reflected by things around them so the animal listens out for the echo) to detect what is around them. Sonar is also used in submarines and ships to detect the depth of the sea or to detect fish. Some of the ultrasound sent by the ship is reflected by the sea bed. The echo is detected and the sonar equipment measures the time between the ultrasound being sent and the echo returning. One of the wave speed formulae is then used to calculate the distance to the sea bed. Ultrasound is also used to make images of things in the body, for example, unborn babies.

Right then, are you ready for some questions?

What is the main use of sound?

What determines the loudness of a sound?

The wavelength
The amplitude
The frequency

What determines the pitch of a sound?

The wavelength
The amplitude
The frequency

What is the range of frequency that the human ear can detect?

Tick any animals below that use infrasound.

What technique do bats use to detect objects around them?

Tick any uses of ultrasound listed below.

What type of sound waves are used to make detailed images of unborn babies?

What is the main use of sound?

CORRECT ANSWER
communicating
communication
EDDIE SAYS
Did this catch you out? It is always hard when you've got to write something instead of having multiple choice but it does make sense, really. Sound is mainly used in communication, not only for humans but other animals as well.

CORRECT ANSWER
500 m/s
EDDIE SAYS
How do you feel about solving equations? If you understand how they work, these questions can be a gift, with lots of easy marks to get. So it's definitely worth taking the time to practise them. What is the equation we need here? Speed = frequency x wavelength Frequency = 100 Wavelength = 5 So, speed = 100 x 5 = 500 m/s

What determines the loudness of a sound?

CORRECT ANSWER
The amplitude
EDDIE SAYS
Some important words to learn now - it's a good idea if you can remember what each of these words means. The loudness of a sound depends on the sound wave amplitude.

What determines the pitch of a sound?

CORRECT ANSWER
The frequency
EDDIE SAYS
The pitch of a sound depends on the frequency of the sound waves. Waves with a higher frequency will be higher pitched and lower frequency waves will be lower pitched. It makes sense really!

What is the range of frequency that the human ear can detect?

Tick any animals below that use infrasound.

CORRECT ANSWER
Elephants
Giraffes
Whales
EDDIE SAYS
There were three correct options here - did you get them all? Elephants, giraffes and whales communicate using infrasound -just like we said in the last teacher explanation. Oops, did we give it away? Or did we just let you know what infrasound means - it means a sound that humans can't normally hear because it is out of our hearing range.

What technique do bats use to detect objects around them?

CORRECT ANSWER
sonar
EDDIE SAYS
Bats use sonar to detect objects around them. They send out a squeak and listen for the reflection (or echo) coming back. From the echo they receive, they get a picture of their surroundings and are able to fly and hunt for food in complete darkness. Isn't nature wonderful?

Tick any uses of ultrasound listed below.

CORRECT ANSWER
Detecting fish
Finding the distance to the sea bed
EDDIE SAYS
Hopefully, you didn't think we were still talking about infrasound and tick the wrong options! If you did, you can see the importance of careful reading of the questions! Ultrasound is used to detect fish, or in submarines and ships to find the sea depth. This is very useful for us, but some people have started realising that it can potentially be devastating to fish populations.

What type of sound waves are used to make detailed images of unborn babies?

CORRECT ANSWER
Ultrasound
EDDIE SAYS
Ultrasound is used to make detailed images of unborn babies and other things inside the body. 'Ultra' means 'above' in science - so the sound used is above the human hearing range. There was a real mixture of questions in this activity - from maths calculations to biology questions about wildlife. How did you get on? Well done for completing another activity.
---- OR ----