In this assessment, you'll review your comprehension of 3 pieces of text covered across key stage 1. The assessment will take approximately 45 minutes to complete. This is a timed activity. Don't worry if it takes you longer to complete. Click on the 'help' button at anytime to come back to reference the text.

The Emperor's New Clothes is a story by Hans Christian Andersen. It was written in 1837 and contains lots of words you wouldn't find in children's stories today. Read through the story carefully. 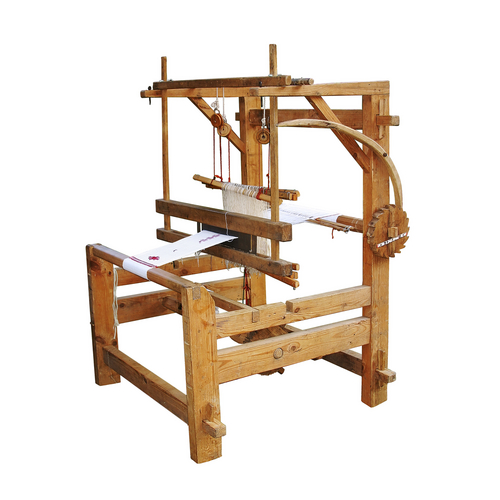 In the great city in which he lived, there was always something going on. One day, two swindlers arrived, pretending to be weavers, and said that they knew how to weave the most beautiful cloth imaginable. Not only were the texture and pattern uncommonly beautiful, but the clothes which were made of the magical stuff were invisible to anyone who was not rich enough, or was very stupid.

"Those must indeed be splendid clothes," thought the Emperor. "If I had them on I could find out which men in my kingdom are unfit for the offices they hold; I could distinguish the wise from the stupid! Yes, this cloth must be woven for me at once," and he gave both the swindlers a lot of money, so that they could begin their work.

They bought two weaving-looms and began to work, but they had nothing on the looms. They also demanded the finest silk and the best gold, which they put in their pockets, and worked at the empty looms till late into the night.

"I should like very much to know how far they have got on with the cloth," thought the Emperor, but he remembered, when he thought about it, that whoever was stupid or not fit for his office would not be able to see it. Now he certainly believed that he had nothing to fear for himself, but he wanted first to send somebody else in order to see how he stood with regard to his office. Everybody in the whole town knew what a wonderful power the cloth had, and they were all curious to see how bad or how stupid their neighbour was.

"I will send my old and honoured minister to the weavers," thought the Emperor. "He can judge best what the cloth is like, for he has intellect, and no one understands his office better than he."

You may have read lots of chronological reports, such as instructions, explanations and recounts. These are all written in time order from beginning to end, and have to be written like this so that they make sense.

This worksheet is about a non-chronological report. This is a type of non-fiction text that isn't written in time order. It gives information on a particular subject and will include many facts.

Read the following non-chronological report on bats and then answer the questions in the worksheet. Remember that you can look back at the text as often as you like by clicking the Help button. 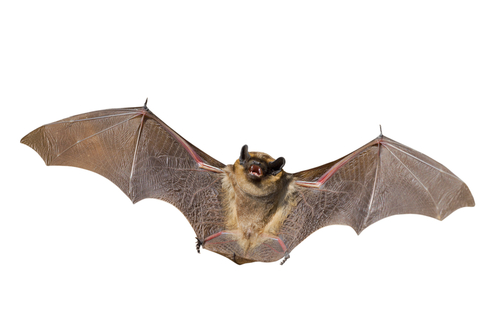 A bat is a flying mammal.

There are more than 1,000 different species of bat and they are found in every continent in the world except Antarctica. Bats can live in caves, trees, houses and even under bridges. Some species of bat live alone but some live with thousands of other bats in colonies. Bats are nocturnal.

Bats have strong wings for flying and strong claws that allow them to hang upside down. They have extremely good hearing and find their way around at night by picking up echoes from objects around them. They have a good sense of smell and are not blind, despite the popular saying 'blind as a bat'.

Most species of bat eat insects, but some eat fruit or fish, and there are three species of vampire bats that feed only on blood.

Many people think that bats are birds because they can fly, but they have fur rather than feathers and are warm blooded. Bats are born alive whereas birds are hatched from eggs. Although bats and birds both have wings, bats also have hands with fingers, and birds do not.

Although some mammals such as flying squirrels can glide through the air, bats are the only mammal that can truly fly.

Enjoy this first part of the tale by Hans Christian Andersen and answer the questions, using full sentences for your answers.

It was lovely summer weather in the country, and the golden corn, the green oats, and the haystacks piled up in the meadows looked beautiful. In a sunny spot stood an old farm-house close by a deep river, where a duck sat on her nest in the reeds, waiting for her young brood to hatch.

At length one shell cracked, and then another, and from each egg came a living creature that lifted its head and cried, "Peep, peep."

"Quack, quack," said the mother, and then they all quacked as well as they could, and looked about them on every side. "How large the world is," said the young ducks, when they found how much more room they now had than while they were inside the egg-shell.

"One egg is not hatched yet," said the mother duck, "but I think I will sit on it a little while longer. I have sat so long already, a few days more will be nothing."

At last the large egg broke, and a young one crept forth crying, "Peep, peep." It was very large and ugly. The duck stared at it and exclaimed: "|t is not at all like the others. I wonder if it's a duck at all. Maybe it's a turkey. We shall soon find it out, when we go to the water." 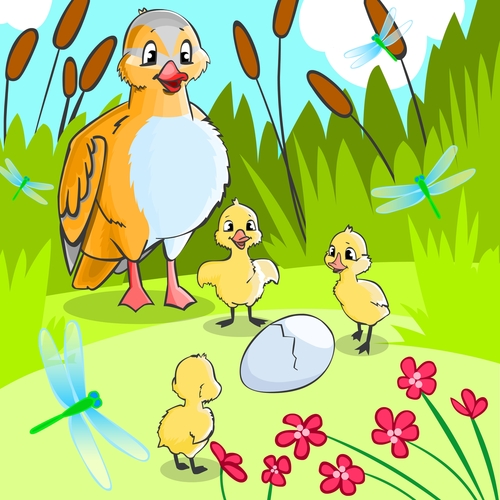 On the next day the weather was delightful, and the sun shone brightly on the green leaves, so the mother duck took her young brood down to the water, and jumped in with a splash.

"Quack, quack," she cried, and one after another the little ducklings jumped in. The water closed over their heads, but they came up again in an instant, and swam about quite prettily with their legs paddling under them and the ugly duckling was also in the water swimming with them.

"Oh," said the mother, "how well he uses his legs, and how upright he holds himself! He is my own child, and he is not so very ugly after all if you look at him properly. Quack, quack! Come with me now, I will introduce you to the farmyard, but you must keep close to me or you may be trodden upon; and, above all, beware of the cat."

The other ducklings in the farmyard stared, and said, "Look, here comes another brood, as if there were not enough of us already! What a queer looking object one of them is. We don't want him here," and then one flew out and bit him in the neck.

"Leave him alone," said the mother; "he is not doing any harm."

"Yes, but he is so big and ugly," said a spiteful duck, "and therefore he must be turned out."

"The others are very pretty children," said an old duck, "all but that one. I wish his mother could improve him a little." 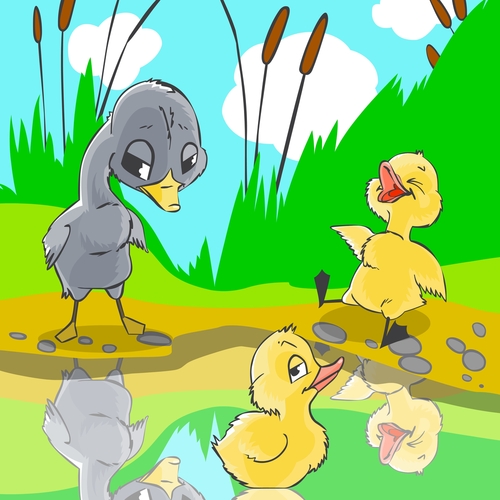 The poor duckling, who had crept out of his shell last of all, and looked so ugly, was bitten and pushed and made fun of, not only by the ducks, but by all the poultry. He did not know where to go and was quite miserable. So it went on from day to day till it got worse and worse. Even his brothers and sisters were unkind to him, and would say: "Ah, you ugly creature, I wish the cat would get you," and his mother said she wished he had never been born. The ducks pecked him, the chickens beat him, and the girl who fed the poultry kicked him. So at last he ran away, frightening the little birds in the hedge as he flew over the palings.

"They are afraid of me because I am ugly," he said. So he closed his eyes, and flew still farther, until he came out on a large moor, inhabited by wild ducks. Here he remained the whole night, feeling very tired and sorrowful.

In the morning, when the wild ducks rose in the air, they stared at their new comrade.

"What sort of a duck are you?" they all said, coming round him.

He bowed to them, and was as polite as he could be. "You are exceedingly ugly," said the wild ducks, "but that will not matter if you do not want to marry one of our family."

He ran away from the moor as fast as he could. He ran over field and meadow till a storm arose, and he could hardly struggle against it. Towards evening, he reached a poor little cottage that seemed ready to fall, and only remained standing because it could not decide on which side to fall first. The storm continued and was so violent, that the duckling could go no farther, so he sat down by the cottage. There was a narrow opening near the bottom large enough for him to slip through, which he did very quietly, and got shelter for the night.