Explain How Images are Made by Eyes and Cameras

In this worksheet, students will explore the structure of the eye and the application of this in cameras.

We see things because light reflects off them and then enters our eyes. Look at the diagram of the eye below:

The eye is a very complex organ and contains many parts. You need to be able to recall the role of the pupil, lens and retina when explaining how the eye works.

After passing through the lens and being refracted, the light reaches the retina at the back of our eye, where the image will form. The retina then changes light energy into electrical signals (called impulses). The impulses are then sent to the brain along the optic nerve.

The ray diagram below shows how the eye works in terms of light: 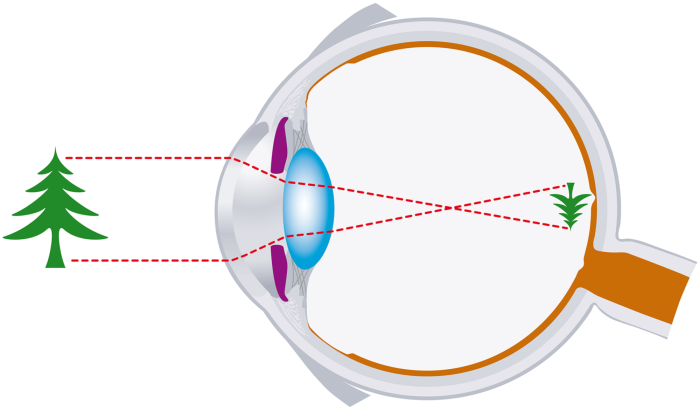 Light from the object enters the pupil, gets refracted by the lens, and arrives at the retina. Notice that the image formed at the retina is tiny and inverted (upside-down). This is due to the rays of light from the top and bottom of the object crossing past each other before they reach the retina. It is strange to think that we actually see everything upside-down, but our brains are able to work out the correct way up, and it automatically flips the image for us!

Now let's look at how cameras work. When we look at a ray diagram for a camera, we start to see similarities with the eye:

The simplest type of camera is called a pinhole camera. It can be made with a box with a tiny hole at the front (the "pinhole") and a screen at the back of the box. Light enters the box through the tiny hole and forms an upside down image on the screen. We think of cameras as modern inventions - and pinhole cameras were first used in photography in the 19th Century - but the idea of using a small hole to capture light and form images had been known for centuries. Artists as far back as the 16th century were using this type of device (called a camera obscura) as a drawing aid!

You may have noticed that the camera acts like a model of the eye. The hole does the same job as the pupil in collecting the light (it also controls how much light enters; the pupil gets smaller when it is very bright and get bigger in dim light, to allow more light in). A pinhole camera may also include a lens to focus the light, just as the lens in the eye. The screen, forming the upside-down tiny image, represents the retina.