Describe the Structures and Functions of the Leaf

In this worksheet, students will describe the structure and functions of the leaf.

Plants have different structures that help them to make their food. One of the main structures is the leaf. A  leaf has many adaptations that allow it to carry out photosynthesis effectively. Let's look at these in more detail below:

The leaf is quite a complicated organ when looked at under a microscope as you can see from the picture above!

The leaf is made up of many layers - each layer has a role to play in protecting the plant and helping it to produce food. Let's explore these layers:

The top layer of a leaf is called the waxy cuticle. The waxy part forms a protective layer over the leaf and reduces water loss from the plant. It's also transparent, so allows light to pass through it.

Directly underneath this is the epidermal tissue called the upper epidermis. This forms another protective layer and helps to reduce water loss too.

The next layer of cells is formed of palisade mesophyll cells. These are rectangular-shaped and are packed with loads of chloroplasts. The chloroplasts contain the green pigment chlorophyll, which absorbs light to power photosynthesis.

The lower epidermis layer contains holes or pores called stomata (stoma for one pore). These stomata allow gases in and out of the underside of the leaf. 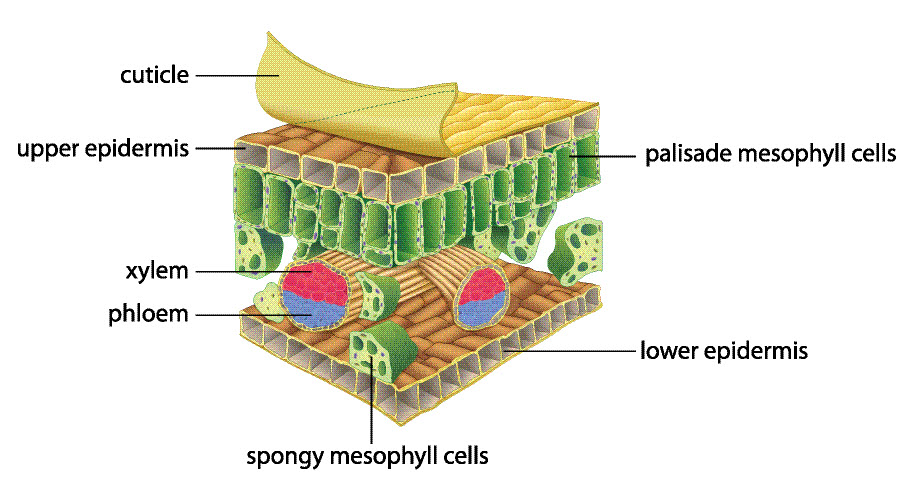 In the following activity, you will describe the different structures and functions of the leaf.