In this worksheet, students will explore what electrical current is and how it flows, using the idea of charge.

You know at lunch, when you’re finally set free from the classroom, you tend to move around in groups with people you like and avoid people you don’t like, right? Well, electrons are like that as well, only they don’t like other electrons. If you get two electrons and try to put them close together, they will try to move apart from each other, which causes them to move. This movement of electrons is what we will be looking at in this activity. 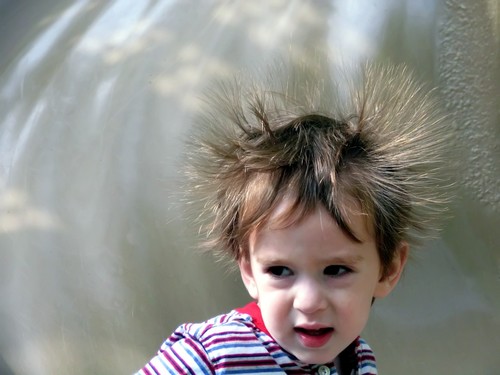 We can use this to our advantage because not only do electrons hate each other, but they love positive charges. They are attracted to them and want to get to them as quickly as possible. This means that if we make a negative charge on one side of a wire and a positive charge on the other, then the electrons in the wire will move from one side to the other.

Why is this so important? It is all because of the definition of current. An electric current is a flow of electric charge, carried by negatively charged electrons in the atoms of metals.

Now for some maths! We can work out the current by using the following equation:

I = current measured in amperes (A)

You will have to remember this equation!

Let's go through an example of how to use it:

Let's imagine that a charge of 3 C passes through a wire every second. What is the current in the wire?

Step 1   Find and highlight all of the numbers.

A charge of 3 C passes through a wire every second. What is the current in the wire?

Step 2   Write out the numbers next to their symbols

Step 4  Put this into your calculator and work out the answer and don’t forget the units!

Now, let's have a go at some questions.