In this worksheet, students will learn the difference between transverse and longitudinal waves and describe basic wave properties such as wavelength, frequency and amplitude.

Waves are not just for the sea, lakes or ponds – they also exist in rivers, cups, puddles, bowls of water, light, mobile phones, crowds at football matches, the internet, music festivals. Basically, everywhere you can think of there will be one kind of wave or another – they are a core concept in physics and we will be looking at how you can tell the difference between the two types of waves and identify their physical properties.

Let’s start off by looking at the two different types of waves – they are called transverse and longitudinal.

This is the type of wave that we all think about when we talk about waves – the ones you will see in the water. This type of wave makes up 90% of all waves in the universe and is by far and away the most common.

To understand what is happening in this wave, we need to think about a Mexican wave. In a Mexican wave, everyone stays in the same spot, but their arms rise up and down. The same is true of the water particles in a water wave – they stay in the same place but move up and down when a wave comes along.

This part is important – the energy moves, not the particles!

This is the type of wave that is much more difficult to see – you might have seen it if you pull a slinky and move it backwards and forwards. It is how sound travels. In this wave, the particles move backwards and forwards, as opposed to up and down - but they still only move around their starting location, they don’t ever go very far! 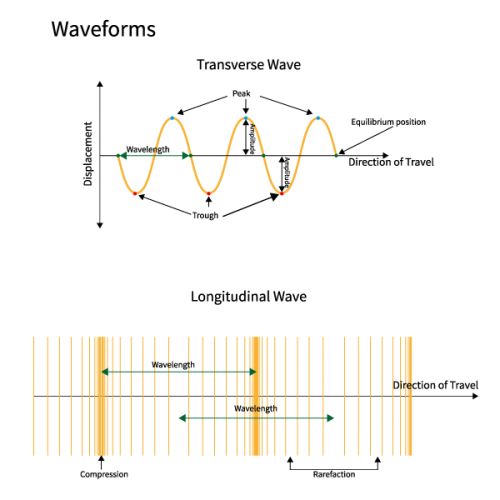 Once again,  the energy moves, not the particles!

We can work out the frequency from the time period by using this equation:

It is a really simple equation, it’s just 1 divided by whatever you know. For example:

Question: Calculate the frequency of a wave with a time period of 2 s.