Read and Understand: 'The Fox and the Goat'

In this worksheet, students read the fable of the fox and the goat and answer questions based on the story.

A fable is a short story with a moral, or a lesson about how we should live our lives. A man called Aesop, who lived in ancient Greece, is believed to have written many of the fables we still know today. The tale of the fox and the goat is one of them.

THE FOX AND THE GOAT 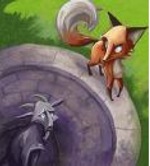 A fox fell into a well and was unable to get out again. After a while, a thirsty goat came by and, seeing the fox in the well, asked him if the water was good. "Good?" said the fox, "It's the best water I ever tasted in all my life. Come down and try it yourself."

The goat thought of nothing but the prospect of quenching her thirst, and jumped in at once. When she had had enough to drink, she looked about, like the fox, for some way of getting out, but could find none.

Presently the fox said, "I have an idea. You stand on your hind legs, and plant your forelegs firmly against the side of the well, and then I'll climb on to your back and, from there, by stepping on your horns, I can get out. And when I'm out, I'll help you out too." The goat did as she was asked and the fox climbed on to her back and got out of the well; and then he coolly walked away.

The goat called loudly after him and reminded him of his promise to help her out, but the fox merely turned and said, "If you had as much sense in your head as you have hair in your beard you wouldn't have got into the well without making certain that you could get out again."

The moral of this story is to 'look before you leap'.