In this worksheet, students practise measuring weight and volume using a simple set of scales.

In this activity, we will be learning about reading measuring scales, and measuring cylinders.

Measuring scales are used in shops and also when baking or cooking at home.

They can be used to tell us how heavy or light something is.

They can also be used to weigh out a given amount, such as those found in recipes.

Measuring cylinders are used to measure amounts of liquids.

You might use a measuring cylinder in Science at school.

They can also be used in cooking, to measure out liquids.

It's useful to remember the following facts:

Let's look at some examples to practise the skills needed for this activity.

Read the mass and write the answer in kg.

On this measuring scale, the arrow is pointing halfway between the 1 and the 2.

This shows one and a half kilograms, which we more commonly write as 1.5 kg.

This means that half a kilogram is 500 g.

So, this measurement could also be written as 1500 g

Read the scale on the measuring cylinder and write the answer in l. 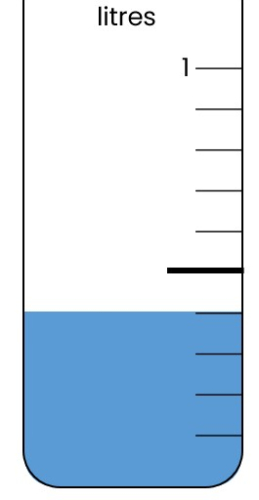 The measuring cylinder holds 1 litre (1000 ml) and the scale is split into 10 smaller divisions.

This water level is at the 4th small line, which represents 400 ml.

Now that you've tried the examples, let's get started on the main activity. Good luck