In this worksheet, students will practise using simple set notation and apply it to Venn diagrams.

To get around this, we use set notation.

What is a set?

A set is just a list of pieces of information. They might  be given as numbers, conditions, non-numerical data. Just about anything.

Sets are frequently given as conditions such as B = {multiples of 4}.

Because these are infinitely long, we need to limit this using the universal set.

This is just the set of numbers that the question is limited to, we use the symbol ε

Putting this info into a Venn diagram 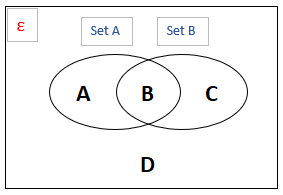 All we have to be able to do is find out which numbers go in which sections.

It's easiest to find B first, as these are the numbers that are in both sets.

A is the ones in set A that aren't already in the middle:

C is the numbers that are in set B that aren't already in the middle:

D is all the numbers in the universal set that we haven't yet seen:

This should give the Venn diagram: 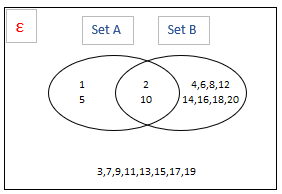 What other notation do we need?

There are a few other set notations that you need to know for GCSE maths.

This would be written as A∩B

This means all the values that are in A and B. 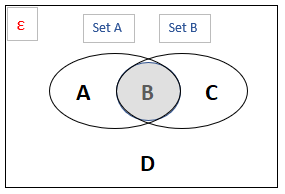 This would be written as A∪B

This means all the values that are in A or B. 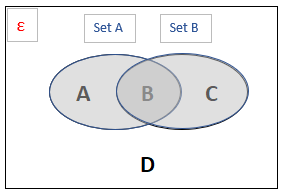 This would be written as A'

This means all the values that are not in A. 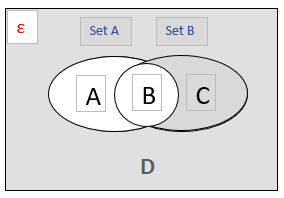 Find the numbers that satisfy:

These are the numbers that satisfy both sets A and B and that are less than 21.

This means we want all the numbers that are either a multiple of 2 or a factor of 50 (and still under the limit of 21).

Not A means all the numbers under 21 that aren't in set A.