In this worksheet, students will have a chance to check over their understanding of the human reproductive cycle, including the changes to the uterine wall, release of eggs and the timescale over which these changes happen and their implications for starting a family.

In order for a baby to develop, a sperm has to fertilise an egg. For that to happen, an egg has to be waiting in the reproductive system.

We will explore questions like these in this activity.

Here's some basic information to help you remember your work on the menstrual cycle:

Once she has passed puberty, a woman starts to release eggs from her ovaries - one every month.  This is controlled by chemicals called hormones which control the whole menstrual cycle.  That includes the preparation of the wall of the uterus for the possible arrival and development of an embryo.  Think of it rather like a bed - the sheets and duvet cover need changing about every month and, in the same way, the lining of the uterus needs to be removed (a 'period' or menstruation) and a new one prepared.  The hormones determine at what point in the monthly cycle each stage occurs: breakdown of the existing wall, preparation of the new one, release of the egg (ovulation) - that sort of thing. 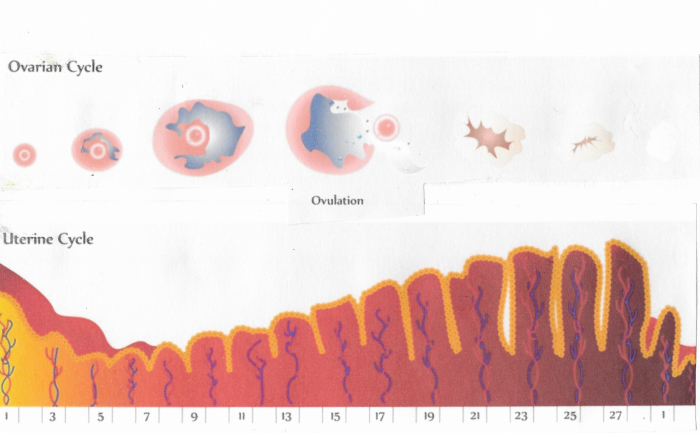 This rather complicated diagram shows a calendar of days along the bottom and what's happening in the ovaries (top row) and to the uterine wall (middle row).  If the egg is fertilised, the menstrual cycle is switched off as the lining of the uterus is needed for the embryo and placenta to develop there.  If the egg isn't fertilised (which is the most common situation), the egg and the lining of the uterus pass out of the body during the 'period' (menstruation).

So, let's put all that information and your previous learning to good use and check out some questions on the woman's reproductive cycle.