In this worksheet, students will consider how reactive acids are and concentrate on how they react with metals.

Acids react with metals to produce salt and hydrogen gas. This can be shown in a word equation:

When a small piece of magnesium metal is added to hydrochloric acid, lots of bubbles of hydrogen gas are produced and the conical flask becomes hot. The hydrogen gas can be collected and tested.

Hydrogen gas is explosive and when a small volume is collected and ignited a 'squeaky' pop is produced. This is the test for hydrogen gas, but this should only be performed with small volumes of hydrogen gas as large volumes will result in large explosions.

There are other gas tests that are commonly used in science. We can test for carbon dioxide gas using limewater. When carbon dioxide is bubbled through limewater, it turns cloudy white. 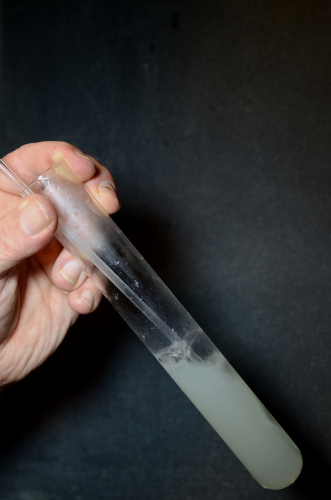 We can test for oxygen gas by using a glowing splint. The gas is collected in a test tube and a glowing splint is inserted into it. If the splint relights, then oxygen is present.