Identify the Parts of a Flower Involved in Reproduction

In this worksheet, students will be introduced to different parts of the flower and learn which are required for reproduction.

Do you understand how flowering plants reproduce? It's a little different to how humans do!  Did you know that most plants have two distinct sexes?  These two sexes can even appear on the same flower!

There are 3 key processes that we are going to look at in this activity:

Flowering plants reproduce by the process of pollination.

Pollination helps the fertilisation of flowers by passing on their pollen.

First, let's look at the structure of a flowering plant so that we can understand how this process can happen. 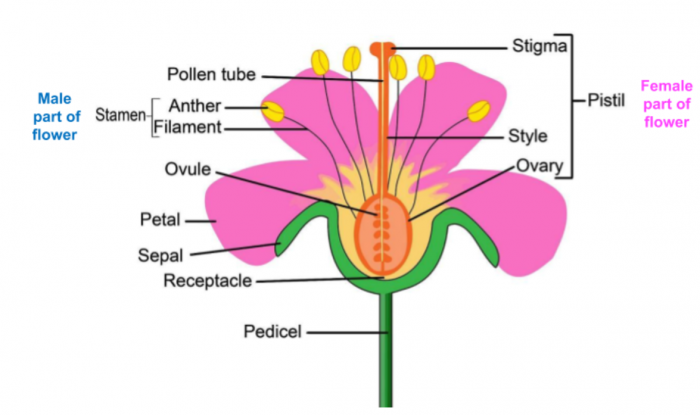 Gamete - Sex cell (sperm in males and ova/eggs in females)

Ovule - Part of the female reproductive tissue in plants, contains the ovule

In order for a plant to reproduce the process of fertilisation must take place.   But how does this happen in plants?

Each grain of pollen in a flowering plant contains a male gamete (male sex cell).

In order for a flower to reproduce this male sex cell must come into contact with the female sex cell.  This is where pollination comes in!  Pollen can travel between plants in two ways:

2) By the wind (wind pollination)

The stigma is the top of the female part of the flower, and it's the part that receives the pollen.  It's often sticky in order to trap the pollen.  From here, a pollen tube grows through the style to the ovule inside the ovary where it fertilises the ovules (egg cells) to make seeds. This process is called fertilisation: the joining of a male and female gamete.

After successful fertilisation seeds begin to form in the ovules.  In order for these seeds to go on to become plants themselves, there is one final step in this process.  The seeds are scattered by animals or the wind by a process called dispersal. Some of the seeds will grow into new plants, then the whole process starts over!

Now, let's put your knowledge of each plant part to the test...