Compare the Parts of the Nervous System

In this worksheet, students will compare the different structures of the nervous system.

Did you know that we need our nervous system to pee?!

The nervous system is a system that allows us to control our body and gives us feedback about the world. Without it, we would struggle to do basic things like going to the toilet!

The nervous system is made up of two parts:

The central nervous system (CNS),  which includes the brain and spinal cord.

The peripheral nervous system (PNS), which are the nerves that carry information to and from the CNS.

So how does the nervous system work exactly?

We react to changes in the environment, so if it's really bright and sunny outside we might squint and turn away from the sun. We would call the sunlight in this example a stimulus. It's a change in your environment which you need to react to. Other examples might be sound or smell. Our sense organs detect the stimuli - these organs are our eyes, ears, nose, tongue and skin. Our sense organs all contain different receptors.

Receptors are groups of cells which are sensitive to stimuli. They change stimulus energy (e.g. light energy) into electrical impulses. These impulses are passed along neurones (you'll find out more about neurones below) to the central nervous system (often referred to as the coordinator). The neurones then pass the impulses to effectors, which are often muscles and glands. A reaction is then made, such as moving your head away from direct sunlight, in the example given above. This pathway can be demonstrated in a flow diagram like the one below:

A nerve cell or neurone has many features. One of its features is a tail-like structure called the axon, which can be really long. This allows nerve impulses to travel all around the body at a lightning-fast speed. The axon also allows nerve impulses to be passed along to other effector cells, such as muscles, or to other neurones. Where the neurones meet, there is a gap called a synapse. It's here where a  specific chemical, called a neurotransmitter, diffuses across the synapse to pass on the impulse. This makes sure the nerve impulse goes where it's meant to - imagine touching something hot with your hand and then moving your leg instead!

Neurones are covered in a blanket of fatty cells called the myelin sheath. This helps to protect the nerve cell from damage and helps speed up the transmission of nerve impulses.

Another feature of the nerve cell is the dendrons. Dendrons are branches (that further divide into dendrites) that receive nerve impulses from other nerve cells.

There are three types of neurones: sensory, motor and relay.  Sensory neurones pass on impulses from our senses to the CNS, whereas motor neurones pass on impulses from the coordinator (normally the CNS)  to muscles or glands (the effectors). Relay neurones connect the sensory neurone to the motor neurone - they're found in the spinal cord and so don't need to travel to the brain. 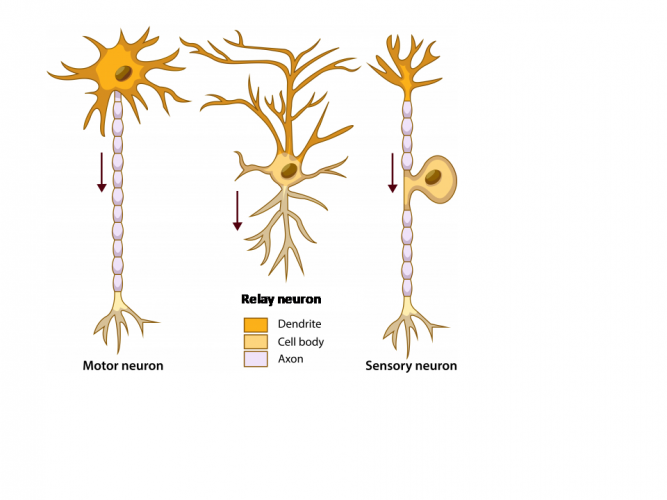 Reflexes are designed to allow you to respond to a potentially dangerous situation very quickly. As there is no time to think, the brain doesn't need to be involved in making a conscious decision. These actions are still coordinated by the CNS, but by the spinal cord rather than the brain. 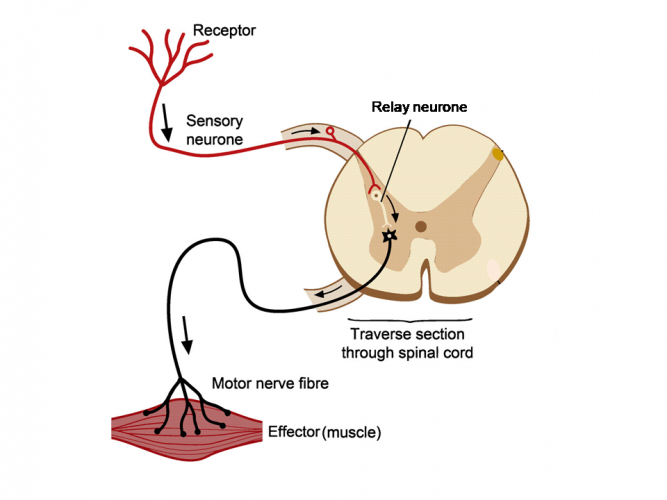 Reflexes need to happen really fast - this way you're protected from harm. For example, if you  touch a hot pan, your reflexes cause you to pull your hand away really quickly before you burn yourself.

The pathway that is followed in a reflex action is called a reflex arc:

In the example of touching a hot pan:

Reflexes are known to be autonomic - they don't require any conscious thought, and our body relies on these for things like heart rate, blood pressure and metabolism.

In the following activity, you will investigate the different parts of the nervous system.