Adaptations of the Circulatory System

In this worksheet, students will explain adaptations of the organs of the circulatory system.

When blood has been pumped out the left ventricle of the heart, it begins to make its journey around the body in an artery called the aorta.  The blood is rich in oxygen. Oxygen is carried by red blood cells. The oxygen leaves the red blood cells as they pass through the capillaries.  Capillaries are the network of blood vessels which pass in between the cells in the body. As blood leaves the capillaries it enters veins. Veins return blood to the heart.

When blood flows out the heart, it enters the arteries. The blood is at very high pressure because it has been forced out of the heart because the ventricles have contracted (squeezed).  Arteries have very strong walls to be able to cope with the high pressure of the blood flowing through them.  The blood moves through the arteries with every heartbeat.  The thick muscular walls stretch and then bounce back into place because of the elastic fibres in the walls of arteries.

Arteries divide into smaller blood vessels.  The smallest blood vessels are called capillaries. The function of a capillary is to take nutrients and oxygen to cells and take waste products away. The structure of a capillary helps them do this. Capillaries have very thin walls, they are only one cell thick. This means that the substances can diffuse in and out very quickly.

Capillaries eventually join up again and form veins.  By the time the blood gets to the veins, it is at a much lower pressure than it was in the arteries.  Veins don't have thick, strong, elastic walls. Veins have valves to stop the blood from flowing backwards. Arteries do not have valves because the force of the heartbeat keeps the blood moving. Veins have larger lumens than arteries so they are under less pressure. 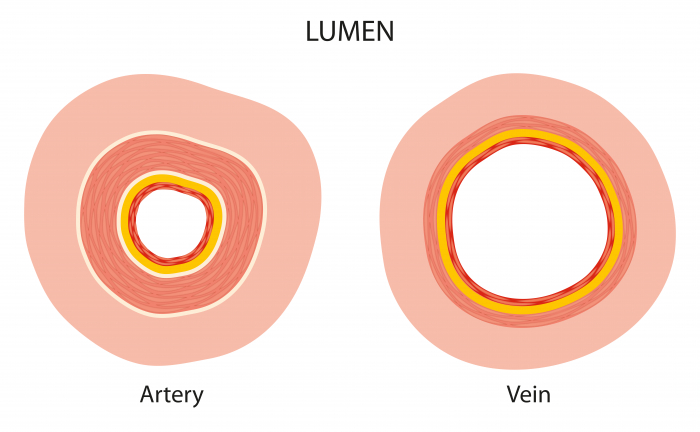 The bicuspid and tricuspid valves are really important, they make sure blood travels the correct way. The blood flowing into the ventricles are prevented from flowing back into the atrium.

The semilunar valves are found between the aorta and left ventricle and between the pulmonary artery and the right ventricle. The valves stop blood from flowing back into the ventricles.

The lungs have a part to play in the circulatory system, they provide the body with oxygen for respiration.

The lungs are adapted for gas exchange. Breathing involves exchanging gases in the lungs.

When you breathe in, oxygen in the inhaled air travels down your trachea which branches off into bronchi (one branch is called the bronchus). This further divides into bronchioles and eventually, the oxygen diffuses through the tiny alveoli (air sacs) in your lungs into your bloodstream. The oxygen is transported to the heart via the pulmonary vein and then pumped around your body via the aorta from the heart. Carbon dioxide is the waste gas produced by respiration. Carbon dioxide diffuses from cells into the bloodstream and is pumped to the lungs via the pulmonary artery to be exhaled.

The alveoli have a few adaptations that make gas exchange very efficient. They are only one cell thick making them very thin allowing gases to pass through easily and quickly. They also have a large surface area, allowing large amounts of gases to be exchanged with each breath.

In the following activity, you will explain the adaptations of the organs of the circulatory system.