In this worksheet, students will discuss conditions which impact transpiration.

Curriculum topic:   Organisation, Transport Over Larger Distances, Living Together: Food and the Ecosystem, Scaling Up, Plant Structures and Their Functions

Water is constantly lost from the leaves of a plant through pores called stomata. When a plant opens its stomata to allow carbon dioxide in for photosynthesis, water will evaporate and diffuse out of the stomata. More water is drawn up from the stem and the roots to replace the lost water. This is because a concentration gradient exists - there's more water in the roots than the leaves. Water is also naturally cohesive. This means that water tends to 'stick' together, which helps to pull it up through the xylem vessels.

This process is known as the transpiration stream.

Although transpiration is inevitable, it's also quite useful! It helps the plant remain cool and allows minerals to be drawn up the plant along with the water. It also gives plants structure and support.

Temperature - increasing the temperature makes transpiration happen faster - the plant loses more water from its leaves. This is because water evaporates at a faster rate when it's warmer, so there'll be a greater concentration gradient. Water will be drawn up from the roots to replace the 'missing' water in the leaves, moving from a high concentration of water (in the roots) to a lower concentration in the leaves.

Humidity - if it's really humid, it means there's a lot of moisture in the air. The concentration of water outside the plant is higher than inside the plant, so the plant doesn't transpire as much and doesn't lose as much water.

Wind - if it's really windy, water vapour is blown away from the leaf.  The concentration of water outside the plant is lower than inside the plant, causing the plant to lose more water from its leaves.

Light intensity - if its really sunny, the stomata will open wide to let in more carbon dioxide for photosynthesis -  at the same time, the plant will lose water.

Root hair cells are specialised cells found at the roots of a plant (see image above). These cells are long and thin, making them useful to manoeuvre between soil particles in search of water. The large surface area of the root hair cell allows for a greater chance of contact with water.​ Root hair cells contain lots of mitochondria, which provides the cell with energy. This energy is essential for active transport, which is needed to take in minerals from the soil.

Another adaptation of the plant is found in the leaf​. The lower epidermis layer contains the stomata (stoma for one pore). These stomata allow gases in and out of the underside of the leaf. The stomata are found between guard cells which open or close the stomata depending on how turgid (full of water and swollen - stomata open) or flaccid (lacking water and shrunken - stomata closed) the guard cells are. The stomata will open to allow in carbon dioxide for photosynthesis during the day, but will close during the night when there's no sunlight.

Water moves through xylem vessels.  A xylem vessel is a continuous hollow tube that transports water and minerals in one direction from a plant's roots to the plant's leaves, via the stem. This allows water to travel uninterruptedly up the stem to the leaves. Xylem vessels are made of lignin that strengthen the walls. This helps to support the plant.

Another transport vessel the plant has is called the phloem. The phloem vessels move sucrose (a form of sugar) that the plant has made by photosynthesis to where it's needed (for example in growing parts of the plant and for storage). Food travels up and down the stem using energy. The cells that make up the phloem are living, and include cells called sieve tubes and companion cells which help to transport substances in the phloem. This is known as translocation. 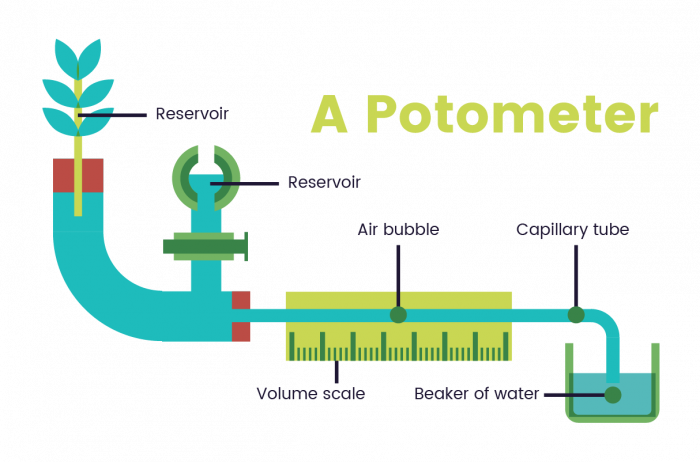 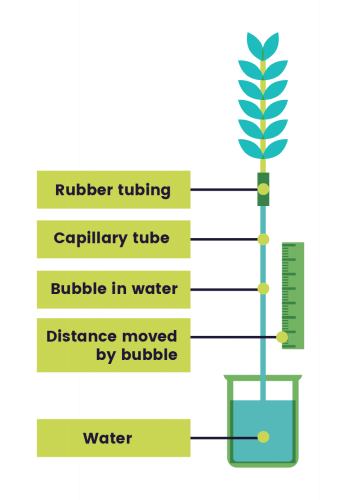 Scientists have been able to work out how to measure transpiration in the science lab. A potometer (shown above) is used to measure how much water is being taken up by the plant and the rate at which it does so.

The conditions can be varied depending on what you want to investigate -  for example, the effect of changing temperature, humidity,  light intensity or wind speed (for example, with a fan).

In the following activity, you will discuss the factors affecting transpiration.