In this worksheet, students will learn how electricity is used to separate substances in a process called electrolysis.

Curriculum subtopic:   Electrolysis Atoms Into Ions and Ions Into Atoms What Are Electrolytes and What Happens During Electrolysis? Electrolytic Processes Reactivity Series and Extraction of Metals

An electric current can be used to separate compounds into their different elements, and also to create new products using a method called electrolysis.

Electrolysis works for ionic compounds where the ions can move - that means that they need to be molten or dissolved.

First example: electrolysis of molten compounds, such as sodium chloride

The simplest types of electrolysis to understand are where we do electrolysis on a molten substance. For example, if we heat up sodium chloride enough, it melts. The liquid contains Na+ ions and Cl- ions. 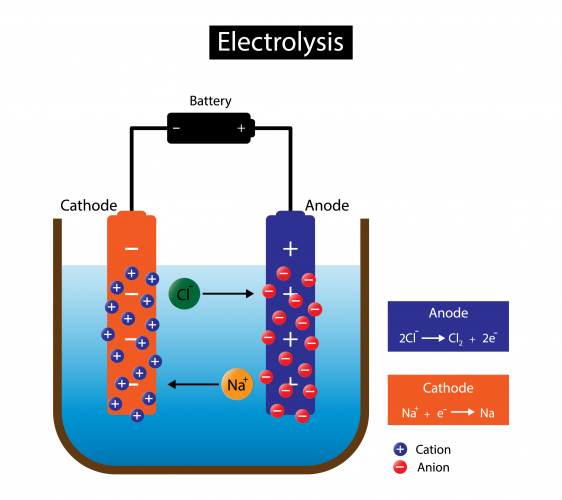 Because of the electric current, electrons move through the wires from the anode, through the battery, to the cathode.

Once the ions reach the electrodes, they interact with electrons:

At the anode, the chloride anions lose their excess electrons, and are turned into chlorine atoms. Loss of electrons is called oxidation.

At the cathode, the sodium cations gain electrons, and are turned into sodium atoms. Gain of electrons is called reduction.

Second example: electrolysis of solutions, such as copper sulfate in water

The copper sulfate example is more complicated, but it is a common experiment, so it's useful to know what happens in outline.

The setup is the same as before, but there are now four types of ion in the solution. The copper sulfate gives us Cu2+ and SO42-. The water breaks down into H+ and OH-.

At the anode, the hydroxide anions lose their excess electrons, and the oxygen from the hydroxide becomes oxygen gas. This is oxidation.

At the cathode, the copper cations gain electrons, and are turned into copper atoms. Gain of electrons is called reduction.

Although a lot of the details of electrolysis get complicated - especially once there are more than two ions involved - the main idea is pretty easy.

Melt or dissolve an ionic compound so that the ions can move, then use charged electrodes to pull differently charged ions in different directions.