Understand the Electrolysis of Solutions

In this worksheet, students will use ideas of reactivity and electrolysis to predict the products formed from the electrolysis of solutions.

Curriculum subtopic:   Electrolysis Atoms Into Ions and Ions Into Atoms What Are Electrolytes and What Happens During Electrolysis? Electrolytic Processes Reactivity Series and Extraction of Metals

Electrolysis is a way of separating and purifying substances using electricity. If the substance is a molten liquid, the process is simpler -  the positive metal ions go to one electrode and the negative ions go to the other.

This activity is about the harder type of electrolysis, where the substance is dissolved in water. Even if you don't normally try the level 1 and level 2 activities, it is a good idea to do the simpler activities on electrolysis first, to make sure you are able to use the basics confidently. 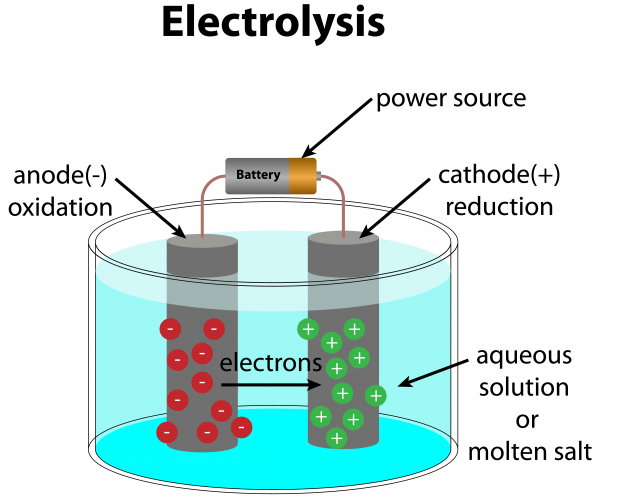 Now comes the super-tricky part. Each electrode is attracting two different ions, so what happens when they reach the electrodes?

What happens at the cathode?

If the metal ion is an unreactive element (copper or below): the metal takes the electrons, and is reduced from metal ions to metal atoms. Hydrogen stays as an ion in the solution.

If the metal ion is a reactive element (iron or above): the hydrogen ions take the electrons, and are reduced from hydrogen ions to hydrogen atoms in H2 molecules.  The half-equation is 2H+ + 2 e- → H2.

What happens at the anode?

If the anion is a halide (for example chloride): the halide gains electrons, and is oxidised from a halide ion to halogen atoms. These atoms become molecules. The half-equation is something like

If the anion is anything other than a halide (for example sulfate): the hydroxide gains electrons, and is oxidised to form water (which stays in the solution) and oxygen gas.

Putting it all together

Suppose we have sodium chloride dissolved in water, NaCl (aq). What happens when we electrolyse this?

2. Decide what is attracted to the anion, and which ion is oxidised. OH- and Cl- go to the cathode. Chloride is a halide, so the chloride is oxidised

And that's it! This isn't easy - there are lots of steps to think about, and the answers aren't always obvious. But if you think through this step-by-step, you will be able to do it, which will make you officially good at chemistry.