Explain the History of the Atomic Model

In this worksheet, students will learn about how our understanding of the structure of the atom has changed, and some of the evidence that caused these changes.

The idea of atoms is very old. Philosophers in Ancient Greece imagined what would happen if you tried to cut something into smaller and smaller pieces. Eventually (they thought), the pieces would be so small that they couldn't be cut any more. Those tiny pieces were called atoms. In this model, every different thing had its own atom - atoms of wood, atoms of skin, atoms of rock, even atoms of colour and taste. Although atoms are tiny, most of the other parts of this model turned out to be wrong.

The next person to develop the idea of atoms was John Dalton. He was a chemist in England in the early 1800's. By looking at chemical reactions, he worked out that some chemicals were compounds - they were made by joining different types of element together. For example, there aren't atoms of water - instead, you make water by joining hydrogen and oxygen atoms together. Dalton knew that atoms were too small to be seen, so he imagined them as tiny solid spheres. Each element was a different sort of sphere. 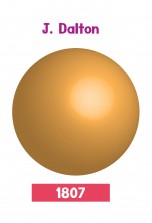 Dalton's model was accepted for most of the 1800's. Then in 1897, a physicist called J.J. Thomson (his actual name was Joseph John, but everyone calls him J. J.) discovered a particle called the electron. When electric current moves through a wire, it's because electrons are moving. Thomson showed that these electrons came out of atoms. In other words, Dalton's model of atoms as solid spheres was wrong because atoms could have electrons pulled out of them. Nobody had seen an atom yet, so Thomson imagined the electrons scattered around the atom - like pieces of fruit in a cake. Because of this, Thomson's model is called the plum pudding model. 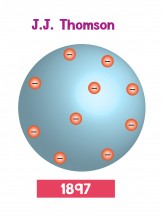 The plum pudding model only lasted about ten years. In 1907, Ernest Rutherford (along with his students, Hans Geiger and Ernest Marsden) did an experiment which had very surprising results. They fired a type of particle called an alpha particle (you'll learn more about those in some of the physics activities) at a thin sheet of gold. They expected the alpha particles to go straight through the gold sheet - and most did. But a few bounced off the sheet, which seemed impossible. Rutherford said, "It was almost as incredible as if you fired a 15-inch shell (a shell is a type of bullet) at a piece of tissue paper and it came back and hit you." 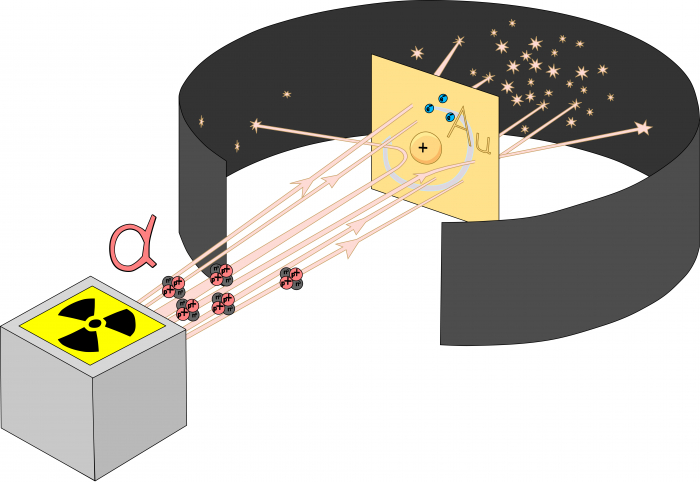 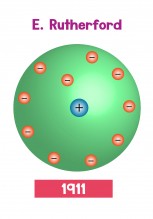 The nuclear model of the atom explained the results of the alpha scattering experiment. Most alpha particles passed through the foil easily because they passed through the gaps between nuclei. However, when an alpha particle hit a nucleus head-on, it bounced straight off it. Since only a few alpha particles bounced off the nucleus, the nucleus must be very small indeed. Unfortunately, there were problems with the nuclear model. It was hard to explain why the electrons weren't pulled in towards the nucleus. Later on, scientists discovered that atoms can give off (emit) and absorb light, but only of specific colours - that's why fluorescent lamp tubes are often a strange purple-white colour.

These problems were solved by Niels Bohr in 1913. Instead of electrons flying around freely, the Bohr atom trapped them in specific orbits, or 'shells'. Since the electrons were trapped in shells, they couldn't fall into the nucleus. The gaps between the shells explained the effects linked to light and colour. Better still, the idea of electrons in shells explained some patterns about chemical reactions which people knew about, but hadn't been able to explain.

There was one final step in thinking about the structure of the atom. In 1932, James Chadwick found that not all the particles in the nucleus were protons. There was another type of particle, with similar size and mass, but no electric charge. These particles were called neutrons. So instead of just protons in the nucleus, there was a mixture of protons and neutrons. 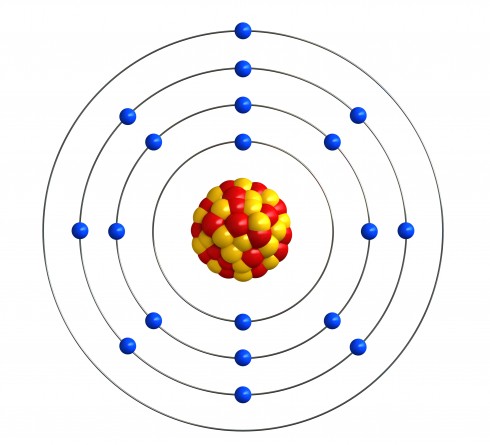 Nobody has managed to make a direct picture of the structure of an atom - though some scientists think they they are very close to doing that. Everyone you've learned about in this activity had to use their imagination to think of a model of the atom that explained what they knew about how atoms behave. When they found new information, they had to change their model to include the new information. That's OK because that's what scientists do.