Interesting Phrases: The Wind in the Willows 3

In this worksheet, students will read an extract from 'The Wind in the Willows' and find words and phrases that capture the reader's interest and imagination.

This extract is part of a story called The Wind in the Willows by Kenneth Grahame. The story is about a Mole who makes friends with a Water Rat and other animals on the river. In this extract he is going to see his friend Badger in the middle of the Wild Wood.

Read it several times to make sure you that you understand it. 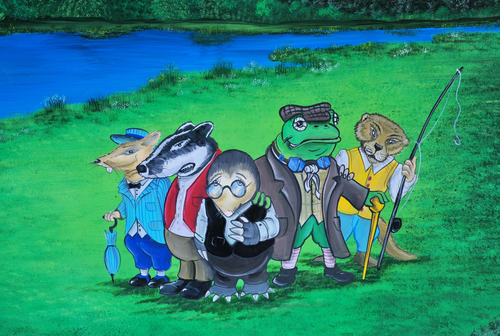 It was a cold still afternoon with a hard steely sky overhead, when Mole slipped out of the warm parlour into the open air. The country lay bare and entirely leafless around him as he pushed on towards the Wild Wood, which lay before him low and threatening.

There was nothing to alarm him at first entry. Twigs crackled under his feet, logs tripped him, funguses on stumps startled him for the moment by their likeness to something familiar and far away; but that was all fun, and exciting. It led him on, and he penetrated to where the light was less, and trees crouched nearer and nearer, and holes made ugly mouths at him on either side.

Everything was very still now. The dusk advanced on him steadily, rapidly, and the light seemed to be draining away like floodwater.

Then the faces began.

It was over his shoulder, that he first thought he saw a face; a little evil wedge-shaped face, looking out at him from a hole. When he turned and confronted it, the thing had vanished.

He quickened his pace, telling himself cheerfully not to begin imagining things, or there would be simply no end to it. He passed another hole, and another, and another; and then - yes! - no! - yes! certainly a little narrow face, with hard eyes, had flashed up for an instant from a hole, and was gone. Then suddenly, every hole, far and near, seemed to possess its face, all hard-eyed and evil and sharp.

Then the pattering began.

He thought it was only falling leaves at first, so slight and delicate was the sound of it. Then as it grew it took a regular rhythm, and he knew it for nothing else but the pat-patpat of little feet still a very long way off. As he listened anxiously, leaning this way and that, it seemed to be closing in on him.

The whole wood seemed running now, running hard, hunting, chasing, closing in round something or - somebody? In panic, he began to run and ran into things, he fell over things and into things, he darted under things and dodged round things. At last he took refuge in the deep dark hollow of an old beech tree.

And as he lay there panting and trembling, and listened to the whistlings and the patterings outside, he knew it at last, that thing which the Rat had tried to shield him from - the Terror of the Wild Wood!

Now use this extract to answer the following questions. Remember you can press HELP at any time to come back to this page. You can read the extract as many times as you like.