In this worksheet, students read an extract from Frankenstein and study how the historical and social context has influenced the text.

Frankenstein was written in 1818 by Mary Shelley. She was only 20 years old at the time.

First, read this extract from the novel. At this point, Robert Walton is on his way to the North Pole on a big ship. He writes a letter to his sister to tell her about a strange sight he has seen, and then a man who he has found: 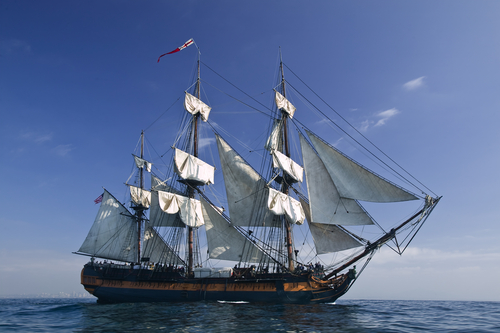 ...We perceived a low carriage, fixed on a sledge and drawn by dogs, pass on towards the north, at the distance of half a mile: a being which had the shape of a man, but apparently of gigantic stature, sat in the sledge, and guided the dogs. We watched the rapid progress of the traveller with our telescopes, until he was lost among the distant inequalities of the ice...

In the morning,... as soon as it was light, I went upon the deck, and found all the sailors busy on one side of the vessel, apparently talking to some one in the sea. It was, in fact, a sledge, like that we had seen before, which had drifted towards us in the night, on a large fragment of ice. Only one dog remained alive; but there was a human being within it, whom the sailors were persuading to enter the vessel. He was not, as the other traveller seemed to be, a savage inhabitant of some undiscovered island, but an European. When I appeared on deck, the master said, "Here is our captain, and he will not allow you to perish on the open sea."

Next, we will go through some questions, comparing how the text was written differently in 1818 to how it would be written in the modern day. If you need to read the text again while answering the questions, you can do so by clicking on the Help button.