In this worksheet, students will look into the greenhouse effect and other environmental issues and discuss the question 'What is global warming?'

Did you know that in the next hundred years the Earth will be around 6 degrees hotter than it is now?

This is due to global warming.

What is Global Warming?

Global warming is a rise in the temperature of the Earth's atmosphere.

Why is the Earth's temperature rising?

The Earth's atmosphere is surrounded by a layer of gases that allow heat from the sun to get in and out, while still maintaining the Earth at the right temperature for humans, animals and plants to survive.

This layer of gases is made up of the following greenhouse gases:

Most of these gases occur naturally; however, extra greenhouse gases have been produced by humans from pollution. This has caused the layer of gases to get thicker, which causes something known as the greenhouse effect.

The diagram above shows the greenhouse effect where the heat from the sun passes through the atmosphere to heat the Earth's surface.

The layer of gas acts like the glass in a greenhouse (hence the name!) - it lets the heat in but does not let it back out.

Where are these extra greenhouse gases coming from?

We can see from the graph below that the CO2 levels clearly go up and down but, since the industrial revolution, they have rocketed to a much higher level than ever before.  The green line (at 350ppm) shows what many scientists think is a safer level of CO2. 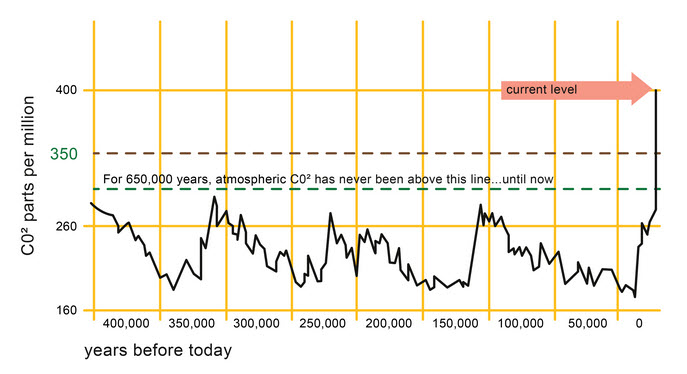 The cutting down of trees and rainforests is also increasing the CO2 and water vapour levels as the plants that would absorb them are being destroyed.

Natural animal waste will let off methane and the increasing human population means increased farming, leading to an increase in animals/animal waste.

Ozone (O3) is a substance that naturally exists in our atmosphere. Its job is to block out the harmful UV rays from the sun.

The ozone layer, however, did become damaged due to chemicals called CFCs (chlorofluorocarbons). These chemicals were once used as refrigerants and in aerosol cans.

CFCs were widely used until scientists found that a hole had developed in the ozone layer.  It turned out that it had been caused by CFCs in the atmosphere. Since then, all CFCs have been banned and, wonderfully, the ozone layer has now repaired itself and the harmful rays are still being blocked out.

So what could happen?

If the Earth's temperature rises this could lead to:

What can we do to help?

The world leaders in the UN have agreed to try to reduce the CO2 levels in the atmosphere by the use of alternative clean fuels such as solar and wind power.

Saving water and energy is a big thing and can be helped by:

Have a look around your house and see how good you are at energy-saving!  Now we will check out some questions on Global Warming.