Reactive Metals with Oxygen and Acids

In this worksheet, students will look at the question 'How does the reactivity of metals affect how they react with acids and oxygen?' Hold onto your hats, this one may be explosive!

The REACTIVITY SERIES lists all the elements in order of reactivity from the most to the least reactive:

This table allows us to predict how metals will react with substances such as acids and oxygen.

All the metals below hydrogen in the reactivity series don't react with acids, so let's concentrate on the more reactive metals.

When a metal such as magnesium is placed in acid, salt and hydrogen gas are produced, along with heat. A reaction that releases heat is known as an exothermic reaction.

This experiment can be performed in the school lab, but it is not advised to try more reactive metals such as sodium and potassium as they are so reactive that they may explode. They will certainly produce lots of heat.

As before, the unreactive metals (like gold) will not react with oxygen even when heated; however, metals such as magnesium react with oxygen to produce metal oxides. The reaction of magnesium with oxygen is commonly performed in the school lab and produces a very bright, white light with lots of smoke. 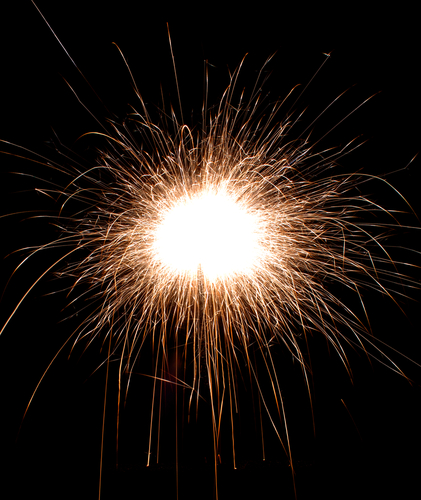 The reaction of magnesium and oxygen is used in fireworks.

More reactive metals, such as sodium, burn to release a lot of heat and unusual flame colours.

Sodium, for example, burns with a very bright yellow flame:

Potassium burns with a lilac flame:

Let's see whether we can use this information together with what we have already learned to tackle this activity.