In this worksheet, students will learn about the structure and properties of giant ionic compounds, and compare different ways of representing their structures.

Once we know how atoms bond together in compounds, we can understand why the compounds have the properties they do. In this activity, you will learn what ionic compounds are like, and why.

The only thing that stops the pattern is when you run out of atoms. Since the structure can have many, many millions of atoms in it, we call it a giant structure. Giant ionic structures are crystalline, because they have a repeating pattern.

In the picture above, there are equal numbers of purple Na and green Cl ions, so we can tell that the formula of the structure is NaCl.

In ZnS, there are equal numbers of Zn (blue) ions and S (yellow) ions. The ions aren't really coloured, but the ball-and-stick image below helps us to imagine the structure. 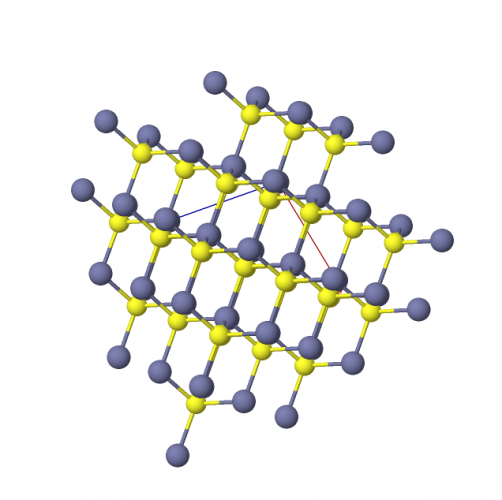 Different people draw the same structures in slightly different ways. In a space-filling diagram (like the NaCl picture), we have a realistic picture of the size of the different ions and how they bond. Unfortunately, it's hard to see all the atoms, because some are hidden.

In the ball-and-stick diagram (such as with ZnS), we shrink the atoms (the balls) and link them by bonds (the sticks). We can then see more of the atoms more clearly through the gaps. We can also clearly see where pairs of atoms are linked (bonded). To really visualise the structure, it's even better to look at a model or a computer animation.

We can work out the composition of a compound by counting atoms. In the picture below, of CaTiO3, there are four green Ca ions, four grey Ti ions and twelve red O ions. Instead of writing Ca4Ti4O12, we cancel all of it by four to get CaTiO3. 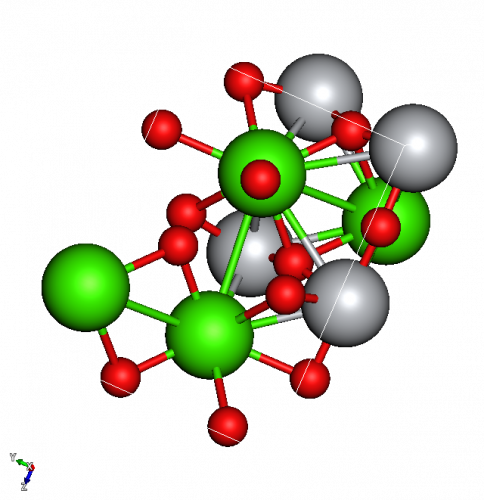 All ionic compounds have these properties:

They have high melting and boiling points: This is because there are strong ionic bonds in all directions. To break these bonds, large amounts of energy is needed, which comes from high temperatures.

Most ionic compounds dissolve in water: This happens because water weakens the electrostatic bonds holding positive and negative ions together.

All ionic compounds are insulators (they don't conduct electricity):  Although the ions carry charge, their positions are fixed in the crystal structure, so they can't move.

Molten ionic compounds can conduct electricity: This is because the ions in a liquid can move. When they move, they carry electrical charge with them.
If ionic compounds dissolve in water, the resulting solution also conducts electricity.

Not all ionic compounds have exactly the same properties. The bond between Na+ and Cl- only involves one electron. It is a lot weaker than the bond between Mg2+ and O2-. As a result, the melting point for MgO is much higher than for NaCl, even though the patterns of ions and bonds are the same.

When you think about giant ionic structures, remember that they are made of positive and negative ions.

The properties of giant ionic structures work because there are strong forces between the ions, which stop them moving. However, we can use water to weaken those bonds, which makes a solution where the ions move around easily.