In this worksheet, students will study the structure of the nervous system and how it functions. Students will also look at reflex actions and the role they play in our survival. 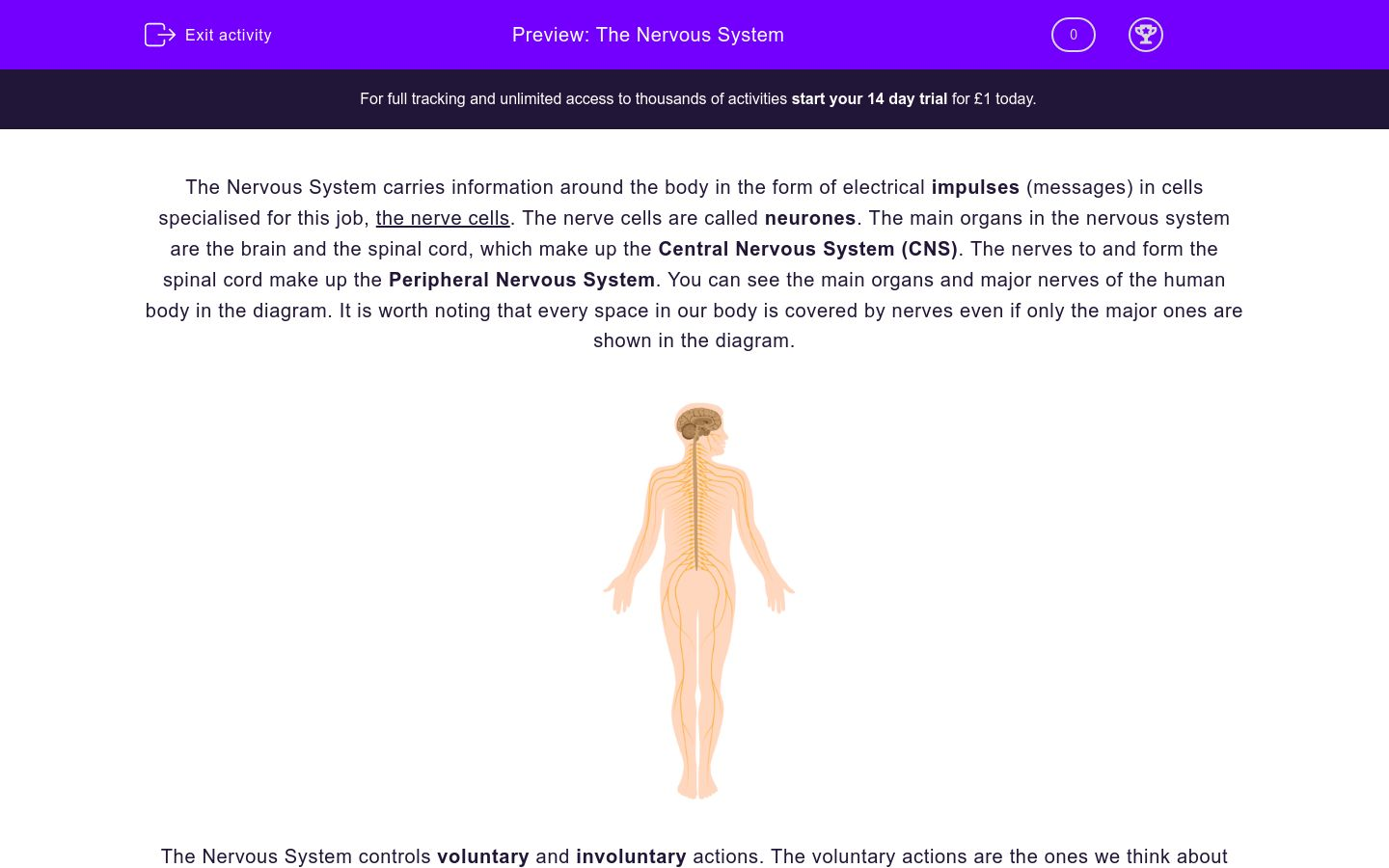 The nervous system carries information around the body in the form of electrical impulses (messages) in cells specialised for this job -  the nerve cells. The nerve cells are called neurones. The main organs in the nervous system are the brain and the spinal cord, which make up the central nervous system (CNS). The nerves to and from the spinal cord make up the peripheral nervous system. You can see the main organs and major nerves of the human body in the diagram. It is worth noting that every space in our body is covered by nerves even if only the major ones are shown in the diagram.

This is a diagram of a neurone, specifically a motor neurone. Motor neurones carry signals from the CNS to effectors. Effectors are the parts of the body that perform the actions, for example muscles. As you can see, neurones have long bodies with an axon for structure, which is protected by a fatty sheath, in order to prevent chemical impulses crossing over. At either ends of the axon there are dendrites which branch out to receive or pass signals from/to other neurones or receptors (organs that recognise stimuli) and effectors.

Signals have to pass from one neurone to another. There is a gap between neurones called the synapse. When an electrical impulse approaches the synapse, it triggers the release of chemicals called neurotransmitters, such as acetylcholine. These substances diffuse across the synapse, allowing the impulse to be carried along.

When we want to perform an action, for example picking up our keys to leave our house, neurones carry the message to the brain and the brain sends signals to the appropriate part of the body to do this action - in our example, to lift our arm and grab our keys with our hand and fingers.

It is important that our nervous system can perform actions without us thinking about them first in order to protect us from danger. Reflex actions are fast and automatic, as mentioned earlier, and the impulses are not carried all the way to the brain to save time. Instead, they travel only to the spinal cord and then to effectors. Here is a diagram of a reflex arc:

A stimulus (sudden change in circumstances) such as touching a hot plate, is received by a pain receptor in the skin. A sensory neurone carries the information to the spinal cord and it is passed to a motor neurone through a relay neurone. The motor neurone carries the information to an effector and so we have a response, which in this case would be our hand dropping the hot plate to avoid burning.

Quick on to the questions!