In this worksheet, students will learn about the formation of ionic bonds.

Atoms are picky – they won't react with everything!  If you don’t give them the right type of partner, then you’re not going to get a reaction out of them. They are like this because they have one aim in their strange world – they want to have a full shell of electrons!

They do this in two main ways, ionic and covalent bonding. We will be looking at how ionic bonding works here, and you will need the periodic table with numbers to be able to do this.

The atoms of the elements in the periodic table try to stabilise by filling their outer shell with more electrons, or by getting rid of some extra ones. They get their electrons when they combine with other atoms of elements that need to get rid of some. When an atom loses electrons (which carry a negative charge), it becomes a positive ion. The atom receiving the electrons becomes a negative ion. The more electrons an atom receives, the bigger the negative charge and the more it loses, the bigger the positive charge.

Metals generally gain electrons because they have spaces in their outer shell that need to be filled, whereas non-metals give their spare electrons to metals. Positive and negative ions attract one another so the compound forms. Metal ions attract a number of other ions and form lattices. The diagram below shows the ionic bond between sodium and chlorine when they form sodium chloride. 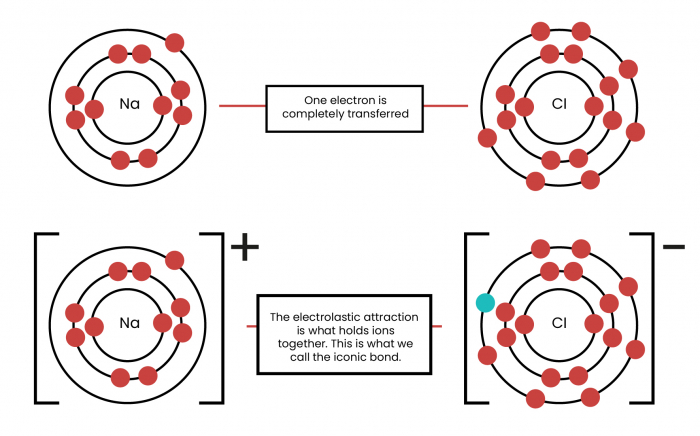 So, you need to be able to do this yourself – here are some step-by-step instructions to help you if you are ever confronted by a scary ionic bonding question.

In this example, we will be using sodium chloride (as in the example above) – you might want a piece of paper to do this by yourself at home.

Step 2: Draw out the Na and Cl atoms. Make sure one is dots and one is crosses.

Step 3: Work out how many electrons each needs to gain/lose to make a full outer shell. Na needs to lose 1 and Cl needs to gain 1

Step 4: Draw them out again, this time with the moved electrons.

If you follow these steps then you will be an ionic bonding king!