Investigate the Process of Cracking

In this worksheet, students will learn how cracking is used to break long hydrocarbon molecules into shorter ones, why this is useful, and the characteristics of the alkenes produced.

A large part of crude oil is residue and consists of very long hydrocarbon molecules. Some can be used for bitumen, to make tar for roads, but there is more residue than we really want. How can we avoid wasting it?

Cracking is the name given for a thermal decomposition process which breaks long hydrocarbon molecules into shorter ones. All that is needed is to heat long-chain hydrocarbons, so that they turn into vapour. The vapour is passed over a hot catalyst (called zeolite) to speed up the reaction. Alternatively, the hydrocarbon vapour can be mixed with very hot steam. This can be done on a very large scale in a chemical works, but it also works as a small-scale experiment: 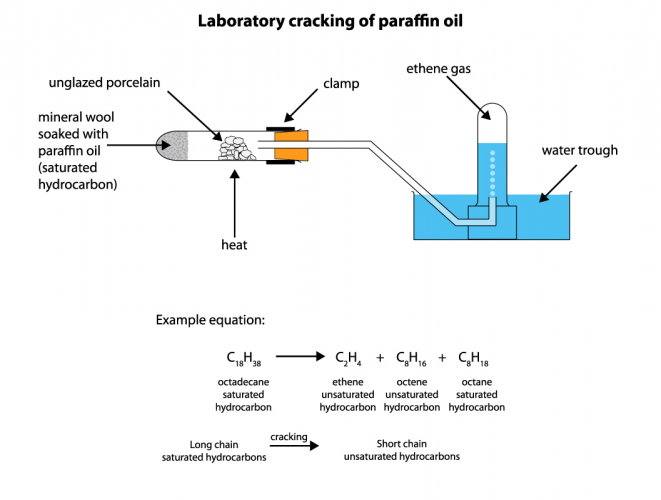 Molecules in a cracking reaction

Let's look at the molecules in this reaction close-up: 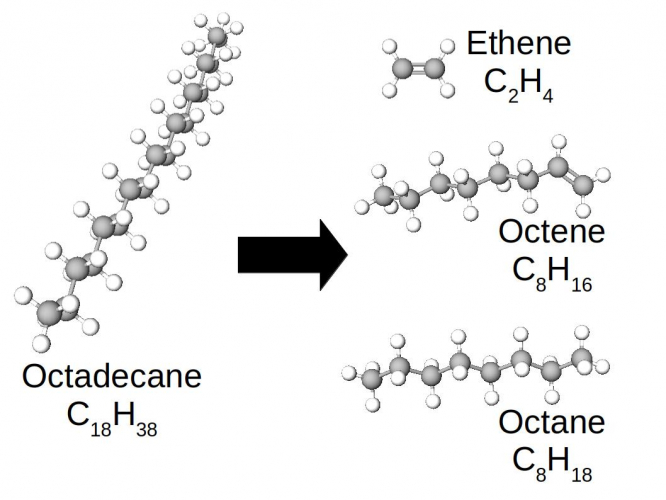 In this case, the long molecule of octadecane has been broken into three smaller pieces.

The ethene is the one which collected as a gas in the experiment - it has such weak intermolecular forces that it is a gas at room temperature.

One of the products is a smaller alkane (octane), but the other two are not. Look at the bond between the carbons in ethene, or the rightmost C=C bond in octene. They are double C=C bonds, not single C-C bonds.

When the octadecane molecule cracked into three pieces, two of the C-C bonds in the backbone were broken. In effect, these broken bonds looped back into the molecule, so that each carbon still had four covalent bonds.

Ethene and octene are examples of another series of hydrocarbons, called the alkenes.

Alkenes are another homologous series of hydrocarbon molecules, like alkanes. The difference is that alkenes have a double C=C bond somewhere in the structure, while in alkanes, all the bonds are single C-C bonds.

Alkenes have isomers because the double bond can be in different parts of the structure. Their general formula is CnH2n. The names follow the same pattern as for alkanes:

Starting with pentene, the alkene names have the same prefixes used to name shapes: C6H12 is hexene ('hex' is six, as in hexagon) and so on.

Alkenes are useful because they are the raw material for many plastics. We can break open one of the two bonds in the double bond, and that allows us to join alkene molecules together to make materials called polymers - there is another activity to help you learn about these.

So, to summarise, cracking happens when we heat long alkane molecules into a vapour, and pass the vapour over a catalyst, or mix it with steam.

This breaks long alkane molecules (which aren't very useful) into smaller molecules. Some of these are useful small alkanes, and others are alkenes, which can be used to make plastics.

Now let's move on to some questions on this.