In this worksheet, students will learn about potable water and how to obtain it.

Curriculum topic:   Using Resources, Explaining Change, Air and Water, States of Matter and Mixtures, The Earth and Its Atmosphere

Drinking water is vital for life. 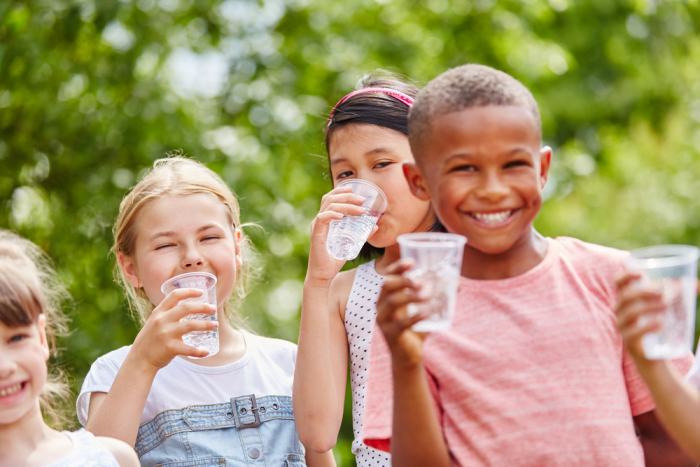 Unfortunately, some water supplies are not safe to drink - they contain dissolved salts or microbes, which make people sick if they drink the water. Potable water is water that is safe to drink. This isn't totally pure (water with small concentrations of salts is better for us than chemically pure water), but it contains nothing harmful. So how do we make safe drinking water?

In the UK, we get our water from three main sources:

Surface water comes from rivers, lakes and reservoirs. These are fed by rain, so they can become limited during dry summers.

Ground water comes from underground rocks, called aquifers. These store rain water below the ground surface. Wells are holes in the ground which let us collect ground water.

Waste water is water that has been used, so is dirty. We need to treat it to make it clean - either so it can be released back into rivers, or so we can use it again.

Filtration removes any large lumps from the water, such as twigs, rocks and bits of rubbish. It is done in several stages. Early filtration uses a wire mesh with fairly large holes - this removes the largest lumps from the water. Later stages of filtration pass water through beds of gravel, then sand. These trap the smaller solid bits.

The next stage is called sedimentation. By now, the water has no obvious lumps in it, but it will still look dirty. This is because there will still be small solid particles mixed up in the water. In the sedimentation stage, the water sits in large ponds, like this: 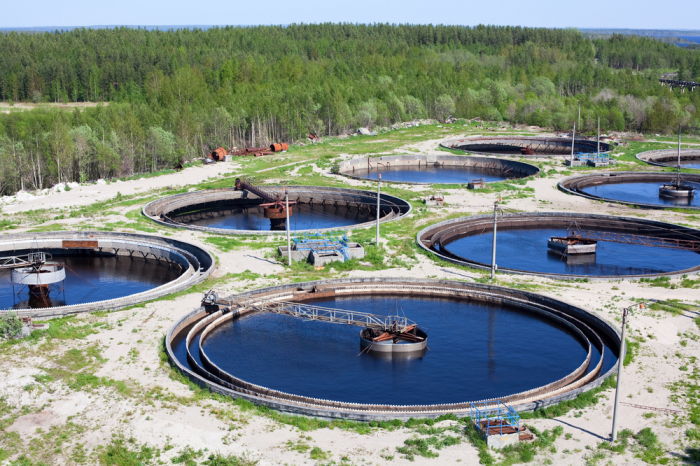 The remaining solid particles sink to the bottom of the water. Adding iron sulfate or aluminium sulfate to the water helps with this, by making the small particles clump together. Now the water will look clean.

The final stage is sterilisation. Filtration and sedimentation will not remove microbes from the water. We can kill microbes by bubbling chlorine or ozone gas through the water, or shining ultraviolet light on the water.

If we have waste water, we have to work extra hard to ensure it is clean and safe. This is true whether we intend to reuse the water, or release it into a river.

First, we filter the water to remove any large particles.

Then, sedimentation takes place. Some particles sink to the bottom (called sludge), and others float on the top (called effluent). The water in the middle is reasonably clean.

If you've ever swallowed some sea water, you will know that it's not good to drink. There is such a high concentration of dissolved salt in it that sea water is not potable. Because the salts are dissolved in the water, filtration and sedimentation are not able to remove them. Removing the salt from sea water is called desalination. If we have to use desalination to make sea water potable, there are two ways of doing this:

One way is to distil the sea water. If we heat the water enough, pure water will evaporate, leaving the solid salt behind. We can collect the water vapour, condense it and make pure water.

The other way to desalinate water is called reverse osmosis. In this, we force sea water through a very fine membrane. The water molecules pass through the membrane, but the salt ions do not.

Both these processes use a lot of energy. Distillation needs huge amounts of energy to evaporate water. Reverse osmosis needs smaller (but still quite large) amounts of energy to generate the pressure needed to force water through the membrane. Desalination is only used in places where there is not much rain, so that ground water and surface water are scarce.

Time for some questions, now.