In this worksheet, students will learn about the principles of electromagnets and solenoids, as well as their use in everyday life.

Electromagnetism is the name we give to explain magic. Okay, so maybe not magic but it is very close! Using electromagnets, we can literally make trains float above the track like in the MagLev train. Sounds hard to believe, doesn't it!

So, how on earth does this work? It's a set of complicated principles that allow electricity to make a magnetic field.  What's more, we make use of this principle in everyday life! Maybe not in such a big and dramatic way as the MagLev train, but it's inside nearly all of our electronic equipment.

The thing is that electric currents (moving electrons) have magnetic fields around them. A straight wire carrying electricity has a circular magnetic field around it, whereas a coil of wire has a magnetic field in the same shape as a magnet. Just as with all fields, you can't see this, but you can see the effects of it.

It is easy to make a simple electromagnet - we just take the wire and make it into a coil. This is called a solenoid and has the effect of increasing the strength of the field around the wire.

We can then improve the field even further by putting an iron core into the coiled wire. 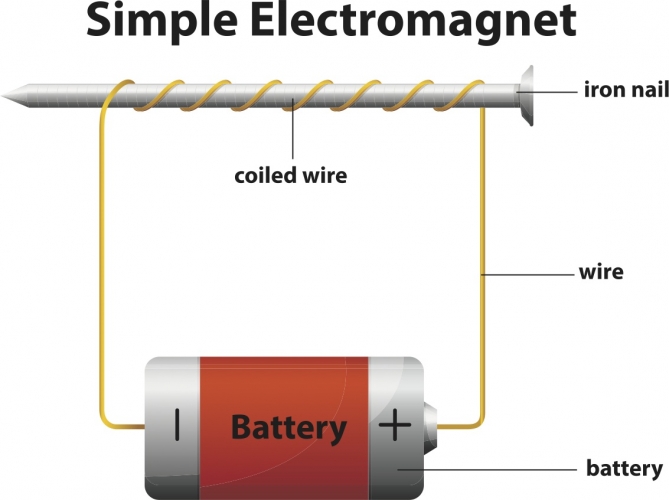 The magnetic field around an electromagnet can be increased by increasing the current in the wire, making more loops with wire and by placing an iron or steel core inside the wire, as shown in the diagram above.

Right then, are you ready to have a go at some questions on this subject?