In this worksheet, students will explain the process of diffusion.

Why can you smell someone's stinky PE socks from all the way across the classroom? Yuk! Normally, it's because sweat and other molecules are moving away from the socks and spread out in the air. This is called diffusion.

Living organisms need different substances to be able to survive and function. These substances need to be transported into and out of their cells through diffusion (as well as osmosis and active transport - you will learn more about these later!). During diffusion, molecules move from an area of high concentration to an area of low concentration. They are said to move down a concentration gradient. Particles diffuse until they are evenly spaced apart. Diffusion is a passive process, which means that no energy is needed and it happens naturally.

The cell membrane has an important job to do. It is selective. This means it won't just let any random particle through - it can monitor which particle is allowed through it and also how many particles. Pretty clever right?!

Breathing involves exchanging gases in the lungs - this requires diffusion. When you breathe in, oxygen in the inhaled air diffuses through the tiny alveoli (air sacs) in your lungs into your bloodstream. The oxygen is transported around your body. Carbon dioxide is the waste gas produced by respiration. Carbon dioxide diffuses from cells into the bloodstream and is exhaled by the lungs.

The alveoli have a few adaptations that make gas exchange very efficient. They are only one cell thick, making them very thin, and so allowing gases to pass through easily and quickly. They also have a large combined surface area, allowing large amounts of gases to be exchanged with each breath.

Another example of diffusion is in the small intestine. Digested food is broken down into small molecules, such as glucose and amino acids. These important molecules need to be transported around the body in the blood. The small intestine is lined with many finger-like projections called villi. The molecules diffuse through the villi of the small intestine into the blood to be transported around the body. The villi are adapted by being very thin and having finger-like projections that increase the surface area. Villi also have partially permeable membranes. This means they have pores that allow smaller molecules through, but not larger molecules. This can be demonstrated in the ​science lab using something called a Visking tube.  The Visking tube acts as a model of a cell membrane. You can see a diagram of a Visking tube below: 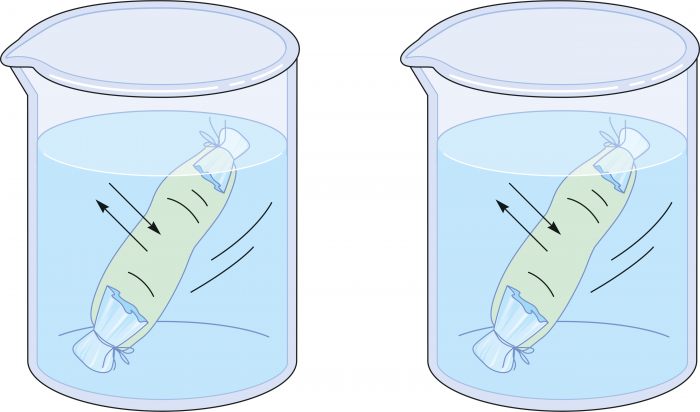 The Visking tube can mimic the action of the gut by allowing small molecules to diffuse out, while the larger molecules can't.

The difference in concentrations (concentration gradient) - having a large difference in concentrations means that diffusion can occur at a quicker rate, as particles will naturally move from a high to low concentration.
The temperature - the higher the temperature, the more energy the particles will have to move and spread out.
The surface area of the membrane - the larger the surface area, the faster the rate of diffusion. This is because more particles can pass through the membrane since there is more area, as in the alveoli in the lungs.
A thin membrane - to provide a short diffusion path.

In the following activity, you will explain the process of diffusion