In this worksheet, students develop an ability to select, compare and summarise information from different texts and use it to form their own ideas, arguments and opinions.

In an English exam you may be asked to study book excerpts.

We are going to look at two book excerpts and then practise analysis and comparison of their content in this activity.

Part of your exam requires you to compare different pieces of non-fiction based on the same theme. The theme of this activity series is rescue.

Read the following excerpts until you feel that you have fully understood them.

Two survivors of a plane crash high in the South American mountains set out on foot to find rescue help for themselves and their companions.

When they started off again at dawn Cortez kept the pace up, energised by the desire to reach the end of the gorge. Steiger lagged behind. The night's rest had not returned his strength. When Cortez asked him to hurry up he complained loudly that he was tired and needed to stop.

They continued nonetheless, and eventually the dull sound of their boots in the snow, the only sound that could be heard, was killed by a thunderous noise which increased in intensity as they reached the end. They were gripped by panic. What if an unforgiving rapid hindered their way? Cortez raced ahead, consumed with the desire to see what was in front of them. His pace quickened rapidly and the gaps between his footprints in the snow lengthened. "You'll hurt yourself," Steiger called after him, but he was also driven forward less by curiosity that by the terror of what they might see.

Cortez was a hundred metres ahead when he suddenly found himself at the end of the gorge.
The landscape in front of him was of the Garden of Eden. The snow disappeared. From under the white blanket a fast-flowing torrent of water raced into another gorge, tumbling over boulders and rocks to the east. And there was further beauty as he looked beyond at patches of greenery: moss, gorse, rushes and grass interspersed with blue and red blossom.

As Cortez surveyed the landscape, tears trickled down his face. When Steiger reached him, he too sighed with amazement and happiness.

Then they stumbled forward onto the rocks and sat by the river. They rested in the sun for hours. The birds that had been absent for so long flitted around the riverbank, seemingly unalarmed by the unusual sight of two filthy, bearded and skeletal beings, bodies puffed out by multiple layers of filthy clothes, rucksacks clinging between narrowed shoulders, their faces red and cruelly weathered.

They were now sure that they were saved, but they still had to keep going.

They advanced farther down the side of the gorge. The going was rough and tiresome as they had to climb rocks bigger than armchairs. They were brought to a halt suddenly by a rocky, impassable outcrop which rose up high above them. The more even ground on the other side of the river prompted them to cross through the raging torrent rather than climb the obstacle in front of them, braving the boulders that the ferocious river forced along its path. 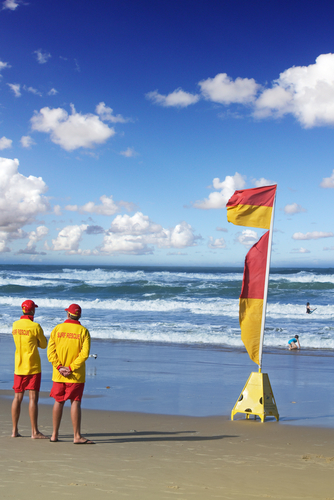 "I'm drowning, help me!" a twelve-year-old girl shouts to her friend. Fortunately, the friend knows that he must instantly call a lifeguard who rushes to the scene, ready to assist.

Happily, the incident is not in real-life on a beach. In reality, we're miles away from the sea. We're in an inner-city school where the young people are role-playing scenes as part of the Lifeguard's Beach to City project.

The project is based in urban regions and is intended to teach children who don't live by the sea. The lifeguards tour such areas to educate children about the hazards of the seaside and how to protect themselves from trouble. It targets primary pupils. Those children living far from the coast in towns and cities have been identified as a higher risk group who are less aware of the lifeguard's work.

Each team in the Beach to City project consists of an acting RNLI lifeguard and a beach safety supervisor. The task is not easy. Within 40 minutes they must put across key safety messages for the beach that the children will absorb. The sessions are intended to be enjoyable and memorable with plenty of role-playing and new equipment to handle.

The sessions start with an introduction to lifeguarding and the lifeguard service. The pupils learn where the lifeguards can be found and how to identify them. Beach safety messages come next. Firstly, protection against the sun: wear a T-shirt, don a hat, splat on the sun cream. Secondly, beach flags and what they mean. A few children have significant knowledge of the flag system, though some think the red flag means there's a shark about, not just dangerous waters! Toy inflatable boats represent a real threat to beach users that sharks don't, and the Beach to City project provides a guideline on their use as a key message.

"In North Cornwall there were many days where most of our work involved saving children in drifting inflatables", said Brian Worth, a beach safety supervisor.

The sessions also cover the use of public rescue equipment (PRE), particularly in areas like Birmingham which has many canals. Teaching respect for equipment such as life-rings, throw lines and emergency communications is as important as how to use it. In London, the Beach to City project visited 30 schools to deliver PRE advice to children.

In 2014 the Lifeguard Education Team plans to expand to a fifth city on the project tour, and to add further cities in the years to come.

Next we will go through some questions on the above excerpts. You can refer back to them at any time by clicking on the Help button.