In this worksheet, students will learn about protons, neutrons and electrons, and the way they join together to make atoms.

Once you know about protons, neutrons and electrons, you'll be able to work out a lot of the patterns about how chemistry works.

Everything is made of atoms, and atoms are very, very small. They are nearly spherical, and their radius is about 1 nanometre. 'Nano' means one billionth, so we can also write this as 0.000 000 001 m, or 10-9 m. When people talk about 'nanotechnology', they are talking about manipulating single atoms to make new things.

The nucleus in the middle of the atom is even smaller, about 1/10 000 of the radius to be exact.

(This picture isn't to scale - the nucleus is much smaller than this!  If we drew the nucleus to scale, it would be too small to see.)

All atoms are made of protons, neutrons and electrons - this is what you need to know about them:

If we want to know what an atom is like, we need to know how many protons, neutrons and electrons it has. There are two terms you need to know:

The atomic number of an element is how many protons there are in the nucleus.

The mass number of an element is the total number of protons and neutrons in the nucleus. We don't count electrons because they are much lighter.

When you look up an element in the periodic table, it will tell you the  atomic number and mass number, like this: 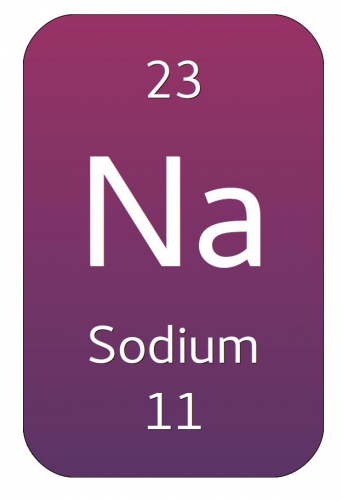 To work out the numbers of protons, neutrons and electrons, follow these rules:

The number of protons is the same as the atomic number:

So sodium has 11 protons

The number of neutrons is the difference between the mass number and the atomic number:

So sodium atoms have 11 electrons

Once you've done some for yourself, it will become easier to talk about atomic numbers and mass numbers - all you need to do is addition and subtraction.