A single atom is tiny, so to make anything interesting we need to join atoms together. Chemists call this making bonds between atoms.

There are three ways of making bonds that you need to know and this activity will help you to learn about the first of them, which is called ionic bonding.

The first thing to remember is that all atoms are more stable if they have a complete outermost electron shell. Noble gases have this already, but most elements need to gain or lose electrons to become stable.

If you react a metal with a non-metal, the metal can lose its unwanted electrons, and the non-metal can take those electrons to get the extra electrons that it needs. Both atoms will become ions. Ions are charged atoms, where the number of protons isn't the same as the number of electrons.

For elements in the middle of the periodic table, it's a bit more complicated. The transition metals can form different ions (iron can become Fe2+ or Fe3+), and metalloids can behave as either metals or non-metals, depending on the exact situation.

This seems hard, but makes more sense with a real example. Sodium and chlorine react to make sodium chloride, which is the salt that people put on food. Let's start with the electron structures of the atoms before the reaction: 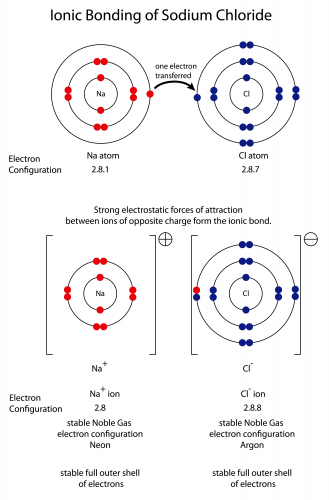 You can write these processes as a pair of ionic equations:

Because the ions have opposite charges, they will be attracted to each other by electrostatic forces. That's why we talk about ionic bonding - the bond is an electrical force between different ions.

Each positive ion attracts negative ions in all directions, so you get a repeating pattern which only stops when you run out of atoms. Ionic compounds have high melting and boiling points because it needs a lot of energy to break the ionic bonds.

If the ions can move, an ionic compound can conduct electricity - this happens in liquids (melts or solutions), but not solids.

We can show the way that electrons move to change atoms into ions using a dot and cross diagram. To see this, let's think about magnesium and chlorine reacting to make magnesium chloride.

If we take another example, sodium nitride is Na3N. Nitrogen needs to gain three electrons, and sodium needs to lose one electron. That means we need electrons from three sodium atoms to complete the outer shell for one nitrogen atom.

And that's it! Remember that ionic bonding happens between metals and non-metals, and works because the metal loses electrons and the non-metal gains electrons -  both atoms are more stable that way.