In this worksheet, students will learn to use the structures of covalently bonded substances to explain their properties, and connect these structures to periodic table groups.

Most covalent compounds form simple structures, also called simple molecules, or simple molecular structures. Simple molecules are tiny - many of them only contain two or three atoms. The forces between the atoms in each molecule are made by covalent bonds, so they are very strong. Scientists call these intramolecular forces - 'intra' at the beginning of a word means inside.

The forces between separate molecules are very, very weak. Scientists call these forces intermolecular forces - 'inter' at the beginning of a word means between - think of international, or internet.

This means that the molecules in oxygen gas look like this: 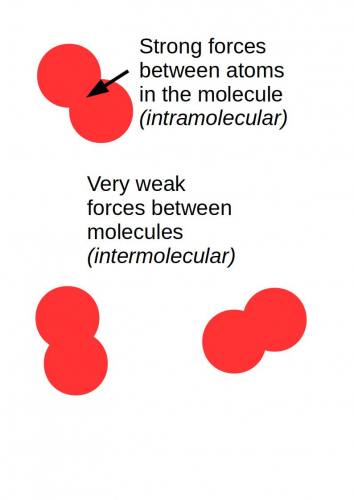 The properties of simple covalent structures depend on the weak intermolecular forces - it doesn't really matter that the forces within the molecule are strong.

Have very low melting and boiling points: Oxygen turns from a solid to a liquid at -219°C, and from a liquid to a gas at -183°C. Larger molecules have higher boiling points, but still lower than for ionic or metallic bonding.
Are usually gases or liquids at room temperature.
Dissolve easily  in water
Do not conduct electricity because there are no mobile electrons or ions.

Diamond is a giant covalent structure made of carbon atoms: