In this worksheet, students will learn the properties and reactions of Group 7 elements, also called the halogens.

Chlorine is used to make water safe to drink, but was also the original chemical weapon during World War One. Chlorine is one of the halogen elements in Group 7 of the periodic table.

The main Group 7 elements are fluorine, chlorine, bromine and iodine. Together, this group of elements is called the halogens. They are all in the same column of the periodic table, one column in from the right hand side. This means that they are non-metals, and they all form small covalent molecules with two atoms -  fluorine is F2, chlorine is Cl2, bromine is Br2,  iodine is I2.

All the halogens are very reactive - this is why they are good for killing microbes. Chlorine is used to purify water, and iodine is used to clean wounds, stopping them from becoming infected. Fluorine is the most reactive halogen, then the reactivity decreases as you go down Group 7. 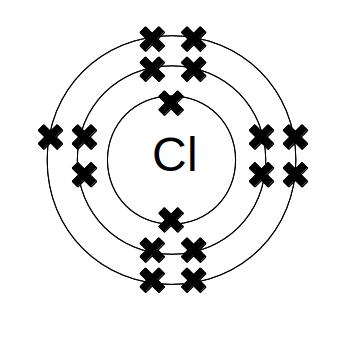 Fluorine is 2.7 and bromine is 2.8.18.7. All the halogens have seven electrons in their outermost shells, and one empty site. The single empty site explains why the halogens are so reactive -  they are very close to having a stable outer shell, so will react strongly with other elements in order to capture another electron.

All the halogen elements react with other elements in similar ways. There are two reactions you need to know:

As you go down Group 7 (from fluorine to astatine):

Start with an alkali halide compound dissolved in water - for example, potassium bromide.

Add another halogen, either dissolved in water, or as bubbles of gas.

Check for any colour changes which would tell us if a reaction had happened.

So if we add chlorine to potassium bromide, we get the reaction below because chlorine is more reactive than bromine:

potassium bromide + chlorine → potassium chloride + bromine, and we see the mixture turn orange (because of the bromine)

If we add iodine to potassium bromide, nothing happens, because iodine is less reactive than bromine.

There's a lot you need to know about halogens. It might seem a bit daunting at first, but start with the electron structure. That explains why they form covalent molecules, and why they are all so reactive.

Try the questions now, to secure your understanding of what's going on.