In this worksheet, students will learn how electrons are arranged in shells for different elements.

Niels Bohr worked out that electrons can only be in certain parts of the atom. In this activity, you will learn how to apply his rules, and start to understand how useful they are.

Bohr worked out that electrons move around in shells, around the nucleus. For example, a potassium atom is drawn like this: 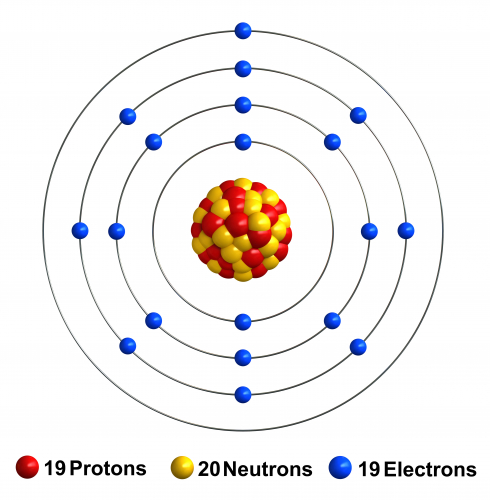 Potassium has the atomic number 19 and mass number 39, so there are 19 protons and 20 neutrons in the nucleus. Because there are 19 protons, there must be 19 electrons to make a neutral atom. They are spread across four shells, according to these rules:

The first shell, closest to the nucleus, can only take 2 electrons.

The second shell can only take the next 8 electrons.

The third shell takes the next 8 electrons.

These rules start to work differently if there are more than 20 electrons, but you won't be asked about that situation in a GCSE exam.

So, for potassium, we think about the electrons this way:

Sometimes people draw the atom out with the nucleus and shells. You will also sometimes see the electron structure written as numbers, separated by dots or commas. The numbers start with the first shell, then come in order, so potassium is 2.8.8.1 or 2,8,8,1.

It took a while for scientists to work out these rules, but they became very useful. It turned out that a lot of patterns in how different elements behave and react depend on how many electrons there are in the outermost shell. For example, lithium, sodium and potassium all have 1 electron in their outermost shells. The next few activities will help you to understand this even better.