A single atom is tiny, so to make anything interesting we need to join atoms together. Chemists call that making bonds between atoms. There are three ways of making bonds that you need to know and this activity will help you to learn about the first of them, which is called ionic bonding.

If you react a metal with a non-metal, the metal can lose its unwanted electrons, and the non-metal can take those electrons to get the extra electrons it needs. If you can imagine atoms being happy, both atoms would be happy because electrons have moved around - both atoms will become ions. Ions are charged atoms, where the number of protons isn't the same as the number of electrons. The metal will have fewer electrons than before, so it will be a positively charged ion. The non-metal will have more electrons than before, so will be a negatively charged ion.

This seems hard, but makes more sense with a real example. Sodium and chlorine react to make sodium chloride, which is the salt that people put on food. Let's start with the electron structures of the atoms before the reaction: 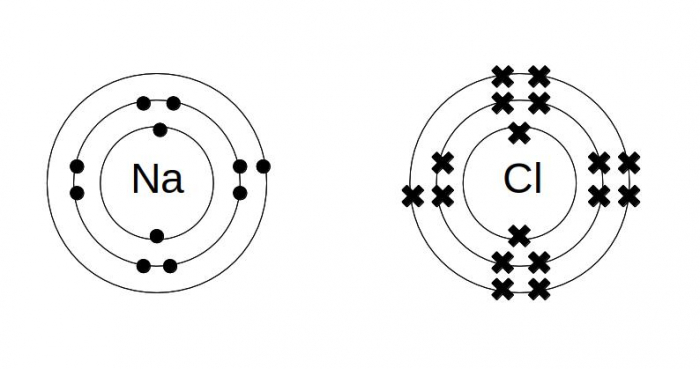 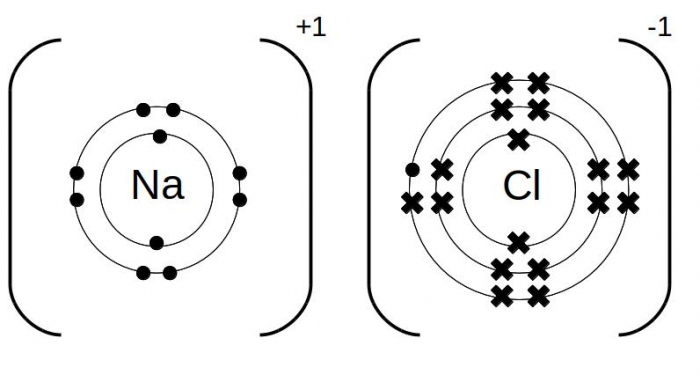 Because the ions have opposite charges, they will be attracted to each other by electrostatic forces. That's why we talk about ionic bonding - the bond is an electrical force between different ions. Each positive ion attracts negative ions in all directions, so you get a repeating pattern which only stops when you run out of atoms.

The dot and cross diagram works a bit differently for different compounds. To see this, let's think about magnesium and chlorine reacting to make magnesium chloride.

And that's it! Remember that ionic bonding happens between metals and non-metals, and works because the metal loses electrons and the non-metal gains electrons -  both atoms are more stable that way.

Now it's time for some questions on this.